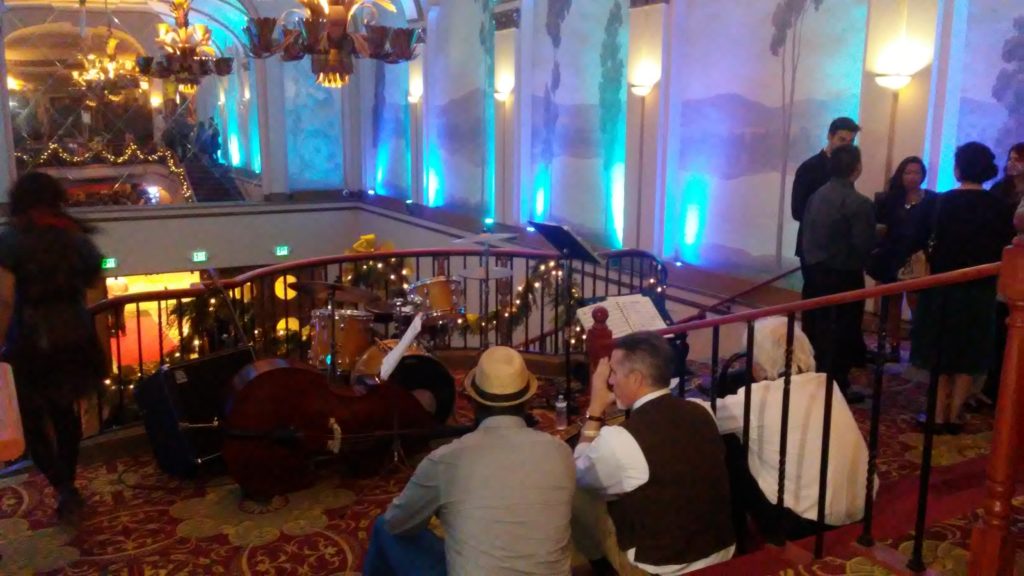 For most Americans, December is usually a time when the normal routine of life slows down a little bit and people reconnect with friends and loved ones. It is a time for sitting in traffic, feeding Wall Street, and loosening up dietary restrictions.

Musicians, however, view the holidays as a time to work. While I personally prefer the free outdoor concert season in the Spring and Summer, December brings high- paying gigs like holiday parties and the ever-lucrative New Year’s Eve gig.

Even amateur musicians celebrate the holidays by singing Christmas carols and joining choirs and choruses. I’m not exactly sure what it is about the holidays that makes people forget about their learned lack of respect for musicianship, but that paradigm shift is definitely appreciated by year-round musicians like myself.

I hadn’t played a jazz gig in several years, but was offered one this year. To be honest, I initially questioned whether or not I could pull off an entire jazz set in front of a large crowd. This gig was a company holiday party on the peninsula, and I envisioned the crowd would be old people who knew jazz and would be hip to the fact that I was faking my way through it.

Focusing on 9-to-5 office work and parenting over the past decade, my musical experience has mostly been studio work and the occasional funk, Latin, and rockin’ kids music gigs. However, over the past two years, I have been sending out vibes to the universe that I am ready to jump back into the working musician scene. With a steady day job, an older and more independent child, and a much more mature worldview, I figured that it was the right time.

I’ve known for several years now that my drum kit needed some attention. I made it through some rock gigs, but playing jazz would require a snare drum that could stay in tune and a bass drum pedal that didn’t squeak.

Only two music stores remain in downtown Oakland, neither of which are very useful to a drummer. The one in my East Oakland neighborhood is rarely ever open, and the one that used to be in the Laurel moved to Piedmont Avenue years ago. Fortunately, I am good at navigating Craigslist.

In addition to needing to sound like a pro for this gig, I would also need to dress like a pro. I often have to dress up for music gigs, but I rarely wear a tie. Given that this was a holiday party, a tie seemed appropriate. For a t-shirt and jeans kind of guy who dresses casually for my day job as a bureaucrat, that’s kind of a big deal.

Since my car stereo was recently stolen and I didn’t want to go for a long drive in silence, I hitched a ride to the gig with my guitarist friend Ian. Like I have countless times before, and like countless musicians before us, we had to cross a bridge over the bay in rush hour traffic to get to the gig.

Fortunately, the commute was uneventful, and we arrived early. The gig was at a historic venue on a rejuvenated main street where parking was scarce, so we double-parked right in front to load in.

I was greeted at the locked front door by two non-threatening gentlemen who claimed to be “security.” Even though I was carrying musical equipment, I was asked “what party?” I was looking for. Ian walked up at that moment and dropped the company name, and we were immediately allowed entry into the ornate lobby of a fancy, art deco era theater.

I set up my drumset on the second floor balcony overlooking the main lobby. We were across from the bar and right next to the photo booth. Unfortunately, there were no doors separating the second floor lobby from the balcony in the main theater where a dance floor was set up; we would have to compete with our acoustic instruments against the booming sounds of ratchet pop music emanating from the laptop of a “DJ” who was getting paid much more than we were.

Despite that lack of foresight, the show went on. Given our prime location, there was a constant mass of bodies around us absorbing enough of the dance music from the main theater that we could at least hear ourselves.

While we played, the majority of the crowd was still too sober to hit the dance floor, so they milled about the lobby conversing loudly, noshing on appetizers, drinking up that liquid courage, and taking selfies with us as their backdrop.

Apparently, I pulled it off. The crowd was mostly young, and presumably not hardcore jazz heads who could tell that I was faking it. The musicians I played with probably noticed, but seemed to enjoy playing with me anyway. I had only played with the bassist once previously and had never met the saxophonist before, yet we sounded good and the crowd loved us. That’s about as jazz as it gets.

Mind you, not anyone can pull that off. Jazz may involve a lot of improvisation and creativity, but you can’t play jazz if you haven’t studied the form and aren’t disciplined. I can proudly say that I am a classically -trained musician who has put in over three decades of hard work honing my craft. My entire adulthood has been structured around storing, transporting, and playing an unwieldy instrument. I live the life of a drummer.

As we packed up Ian’s car for the ride back to East Oakland, I couldn’t help but reflect fondly upon my journey to get to that exact moment. It wasn’t my first gig, and it wouldn’t be my last, but like every other gig I had played in my life, it was special.

And I said to myself, “What a wonderful world.”

By Debora Gordon Gaylynne Hudson and her husband bought their East Oakland home at the height of the real estate boom. They paid about $370,000 for their home off Foothill Boulevard  in February 2005. Both […]

Life in the Killing Fields

As I walk down this residential street in East Oakland, I notice how the front yard of every house is green. There are no lawns in this working class bedroom community, but the young weeds […]

The James Beard Awards, which took place in Chicago this year from June 10-15, is considered the highest honor in the food industry. One of the Emerging Leadership awardees from the James Beard Foundation this […]