A Resilient Person: My Father 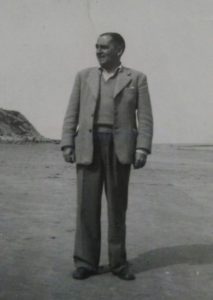 Katharine’s father at the beach in the 1950s.

My father, Roy Davies, was 14 when he left school in 1920, the school leaving age in England at the time. He wanted to go to high school, but his father had died when he was a child and there wasn’t any money for secondary school.

So, Dad went to work at a local factory that made electrical cables, BICC (British Insulated Calendar Cables), even then a huge company. He gave his mother his paycheck each week and, when he was older, he began taking evening classes at the local technical school. Slowly, slowly, he worked his way up in the company until he was an electrical sales engineer. Because he had to visit clients around the northwest of England and North Wales, he was assigned a car. In those days it was unusual to have a car if you weren’t wealthy.

My father was a careful man. A man who never bought anything on credit, except for the house he and my mother purchased when they got married. In those days, buying a house was not common, and it was surely made possible due to Dad having saved carefully for many years—he had decided that he would not marry until he could afford to buy a house. He was 33 and my mother was 23 when they married. It was not a fancy house, but a comfortable home on a busy street in a small town south of Manchester.

My father was a man of his day and believed it was his responsibility and duty to provide for his family, and he refused to let my mother work outside the home, much as I suspect she would have liked to; she was the first in her family to go to college and she became a physical therapist. There weren’t many luxuries in our home, but we were well taken care of and knew we were loved.

My father worked for BICC for over 40 years and was proud to be a loyal employee. There had been conversations at the company about being let go if you had worked for the company for over 40 years. An economic necessity, the company said. Long-standing employees like my father were too expensive because of retirement costs. This post-World War II economic thinking was a new reality in the world of work and my father didn’t think he would be affected. After all, he knew he was a respected and valued employee. In fact, he had been offered a regional manager’s position, which he declined because it would have meant relocating and he didn’t want to interrupt his children’s schooling.

My father’s boss had forewarned him about the upcoming changes, but Dad continued to believe that he wouldn’t be affected. However, one day when he was 56, he was made redundant. Sacked. Made unemployed. My sister, Barbara, was at home sick that day and she remembers seeing Dad falling in through the back door and then bursting into tears. Mum was cooking lunch and she looked up, alarmed.

That evening, when my brother and I got home from school, Mum and Dad called the three of us into the dining room.

“I lost my job today,” Dad told us, wiping his eyes with his laundered handkerchief, “but I’ll still provide for you all.”

I had never seen my father cry, but the shame reflected in his damp eyes almost made me cry. We waited in silence, not sure what to say. Not sure where to look. Not sure what it really meant for us all.

After supper, Barbara and I huddled in our shared bedroom, trying to make sense of it all, and making plans. We were 16 and 17, so could leave school legally. We went to talk with our head mistress, who immediately sent a letter to Mum saying, “Your daughters have been in to see me today. They tell me that Mr. Davies just lost his job and they are planning on leaving school. I am very sorry to hear this news.” The next day, when we got home from school, Mum and Dad called us into the dining room once again.

“No,” said Dad vehemently. “You need to stay in school and go to college.”

This was a mantra that we had heard for as long as I could remember and it was a reality if we passed our exams, as college was free in England in those days.

And that’s exactly what Dad did, day after day. He’d take the bus to the unemployment office in town and check out the job offerings that he was qualified for. He’d apply for jobs. But, he didn’t get any offers. He began to look for any job, just something that would help pay the bills. Finally, he was offered a job as a janitor at the local technical college.

Each morning, he’d shave carefully, comb his short hair back from his forehead, and dress in good clothes—an ironed shirt, sharply creased trousers, a V-necked sleeveless sweater knitted by our mother, a tie, a sports jacket if it was cold, a dark woolen overcoat if it was very cold, and always freshly polished shoes.

Before he left the house each morning, he checked his collar and tie in the mirror to make sure they were straight. And then he would walk a mile to his new job, where he swept and washed classroom floors, stoked the boiler to heat the rooms, collected and took out the garbage, and made electrical repairs. He took pride in doing his work well and, although this job did not align with his qualifications or experience, we never heard him complain.

My father’s legacy lives on. All of his children have inherited his dedication to working hard.