Deep in East Oakland off the 98 Avenue exit of 580, about two miles up Golf Links Road is my neighborhood.  Sequoyah Highlands is an inner city suburb nestled between Knowland Park’s permanent open space which contains the Oakland Zoo, the Chabot Equestrian Center of the East Bay Regional Park System along Skyline Blvd and the Sequoyah Country Club.

This beautiful community of 300 homes on larger than average lots, rolling hills, spectacular canyon and Bay Area views, is just five minutes from what was once called one of the deadliest zip codes in Oakland, 10 minutes from the Oakland Coliseum, and 15 minutes to Oakland’s fabulous Lake Merritt.

“Fifty homes have changed hands since the beginning of the year” according to The Highlander newsletter serving the community. Like all of Oakland, Sequoyah Highlands is in an economic transformation. Many of the original homeowners from the 1950s are downsizing.  Through the work of the neighborhood association, new residents quickly meet the long-term residents.  Sequoyah Highlands’ beauty is that it is surrounded by open-space.

However, the wide quiet streets are a tempting playground for skateboarders and careless drivers. The long term controversy in the neighborhood is the expansion of the Oakland Zoo. The horrendous traffic jams at the Oakland Zoo are legendary and are only subject to grow.

The Associated Residents of Sequoyah Highland’s volunteer Board of Directors work hard to keep us connected. It publishes a newsletter several times a year, sponsors at least six events per year including an annual holiday party, an awesome pot luck National Night Out block party with music and jumpers, a Halloween party for the kids and adults, as well as strolling Holiday Carolers.

When I walk out of my door, I see not just houses but the homes of families whose names I know.  For about 10 years I was a morning hill walker.  We met Monday through Friday, 6 a.m. and walked one mile up the hill to Skyline Boulevard and returned within 45 minutes.  When I joined, one of these walkers had already been walking the hills for 14 years. Another walker grew up in the neighborhood and had recently returned from New York City.

Over my 10 year,’ walkers came and went.  Rules were – meet at Royal Oak Road and Elysian Fields and start walking. If you go earlier, leave the newspaper on top of the rock so we know that someone started without the group, or if you are late, you know that the group left you.   Through these walks, laughing all the way, I learned the neighborhood history, met my neighbors and collectively, solved the pressing local, state, national and international issues of our times.

Mid-morning Sunday, November 27, I recreated the walk of the past.  Within the first five minutes, I saw about seven other neighbors.  Some, like me, were walking their dogs; others were runners.  Today, no conversations, just a nod or a hello of acknowledgement.

I focused on the changing and varied flora. How many types of trees?  Let me identify a few:  Weeping Willows, Holly, Japanese Maples, Blue Spruce, Palm, Magnolias, Crepe Myrtles, Dogwoods, Pine, and Junipers. All grow perfectly, in the moderate Mediterranean climate.

There are homes with juniper bushes in the broad front yards, a landscape design remaining from the 1970’s drought.  Newer desert landscapes with assorted grasses, or evergreen ground covers, mixed rocks, boulders and gravel all installed in the current drought. Of course there are homes with yellow and brown grass where the owner stopped or at least reduced the outside watering.

But there are a surprising number of homes where the green grass grows all around.  Curb appeal is important in this neighborhood and some do not want to jeopardize or compromise the aesthetics or the appraised value of their home. The market is hot right now. 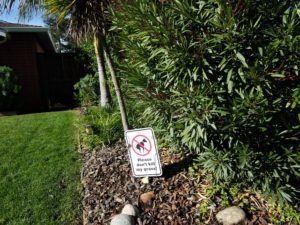 Newly discovered on this walk was the Little Free Library. I had driven past the little library several times saying I was going to stop.  It is beautiful. And so well constructed that the recent rains had not disturbed the contents. 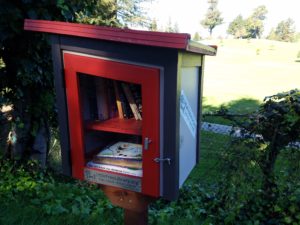 I spotted several books I could borrow or exchange in the coming months,  including, the history of salt around the world—more than a preservative but also at times a highly sought after and exotic commodity.

Farther up the street on a hillside, someone is building a set of stairs out of what appeared to be old railroad ties.  Families of deer are often seen on this hillside and I can only image the view from the top.  A lingering question – who owns this property? 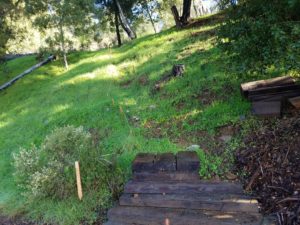 What is next in store for it, and why the stairs? The veteran hill walkers would know.  The quiet beauty, friendly, diverse population of families, combine to make this neighborhood cohesive and one of the best places to live in Oakland.

Except for morning and evening rush hours, few cars travel up and down our hills.  Yet traffic problems interrupt the tranquility of the neighborhood.  Some drivers fly down the hills. 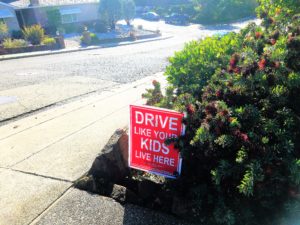 Afternoon drivers have the streets to themselves and some drive down the middle of the street.

A house at the bottom of a hill has had several cars lose control and crash into its yard.  The owners have installed steel posts in front of their driveway to stop runaway vehicles from careening into their home.  Speeding cars are an irritant in the community; residents are more concerned with the traffic that will come with the expansion of the Oakland Zoo.

“The California Trail at Oakland Zoo will be the first-ever of its kind, giving almost a million visitors each year the opportunity to connect with and learn about many California native species, like the Grizzly bear, that vanished from our lands so long ago,” says Dr. Joel Parrott, President & CEO on the Zoo’s website. Currently, traffic at the intersections of 98 Avenue, Golf Links Road, and Mountain Blvd backs up for what appears to be at least a mile in every direction on a normal weekend morning.  At a recent community meeting, neighbors were not happy that the Zoo, Cal Trans and the City have not yet developed a plan to reduce the congestion at the Zoo’s entrance, especially since a portion of the 56-acre expansion will open in the summer of 2017.

“One 120,000 more people will visit the new California Trail exhibit,” according to Nik Dehejia, the Chief Financial Officer.  The vision is that the Zoo becomes a destination in the Bay Area drawn by what the Friends of Knowland Park describe as “a three- story visitor center, high-end restaurant, offices, interpretive center, paved walkways, 15-car gondola with seven towers up to 68-feet high, and 100+ person overnight camp compound.”  While many look forward and support the expansion, the controversy continues in the hearts of others.

The Sequoyah Highlands pocket of Oakland is a vibrant, sought after community because it is connected, safe and reflects Oakland’s diversity.  My block alone has families who are African American, Chinese, Filipino, Iranian, Italian, Japanese and Latino, just like all of Oakland.