How does the Alameda County Community Food Bank (ACCFB) provide the equivalent of 28 million meals a year? What do volunteers do? How does an organization manage, train and keep 17,000 volunteers a year? Why is there an urgent need for volunteers now?

Residents throughout East Oakland see the food bank’s many food distribution centers in churches, schools and community centers similar to Word of Mouth Food Pantry described by my fellow Oakland Voices Correspondent Katherine Davies Samway. We are also aware of the food drives that occur all year and during special giving events. What we don’t know is how food gets to the distribution sites –  who prepares it?

At the Food Banks’ community engagement center, I was greeted by a volunteer and asked to sign-in and have a seat in the room with several computers on the table just below a big screen on one wall.  At the end of the table, a large ball of used nametags attracted my attention.

Before I could sit down, Andrew Hayes, volunteer coordinator, arrived and escorted me to a larger conference room.

“Volunteers come as individuals or groups to sort food. This time of the year, just over 50 percent of the food is perishable,” Hayes said, giving an overview of the volunteer program.  “Helpers operate the emergency food hotline in five languages. Additionally, they collect food at special food drives like the Alameda County Fair, or serve free summer lunch at Oakland libraries. General office help and serving as an advocate are additional roles volunteer assume.”  After a shift in the warehouse, volunteers can learn about the impact of their work through a 45-minute video.

“A person can volunteer for a few hours, a day, or for any schedule that meets the volunteer’s availability, skills and desire and the food bank’s needs,” Hayes said.

Sue West, a longtime volunteer joined us.  “I like to volunteer because this is the best food bank in the country, and the hours are flexible and meet my schedule needs,” West said. “I come every Wednesday. If I miss a week doing something with my grandchildren it is OK.  Lastly, the environment is a good place to be.”

I wanted to take a picture of the energetic 80- year -old while she was on the floor sorting.  However, right away, she warned me: “Open-toed shoes, you can’t come on the floor—safety first.”

Inside the warehouse, an array of activity occurs – goods arrive, produce and non-perishable goods are sorted, boxed and weighed and goods are packed for shipping. Storage centers, individuals and groups of volunteers prepare to distribute an average of three million pounds of food per month, according to Altfest. (see PowerPoint)

Relationships and recognition are key values that Hayes mentioned multiple times in our interview. The Food Bank tracks data on all volunteers and celebrates those individuals who contribute 100 hours or more.

The organization recognizes volunteers at three major events throughout the year – a dress-up evening event, a picnic and a holiday luncheon. These events reinforce and sustain the food banks’ relationship with volunteers.

“Our training program is tailored to the work the person will do.  It can be as short as five minutes for some groups,” Hayes said.  “The longest training is two hours—when we have to address food safety for the summer lunch program.” He stressed that the goal is a successful match. “Volunteers are most effective when the situation is mutually beneficial.”

“There is a spike in demand for volunteers in the summer because children are out of school,” Altfest said. “Eight years ago, cities were talking about closing libraries, due to budget cuts.  School districts saw that children were not going to schools to pick-up free summer lunches—leaving thousands of children under nourished.  A volunteer conceived of the idea to bring summer lunch to children at the libraries and today more children and adults are using those libraries, checking out books.” The relationships between volunteers and staff working together allow the Food Bank to be open to fresh ideas.

The summer lunch program created an urgent need for volunteers who are available during the day.  Volunteers are needed to serve lunch in eight different libraries, five days a week. If you can help the Alameda County Community Food Bank click  Volunteer registration.

Volunteers also assist in reducing the stigma associated with receiving help.  “Sixty percent of clients have a working adult in the home.  And one in five residents in Alameda County receives outside food support,” according to Ward and Altfest.  This means that most people know someone at work, at home, in their house of worship, in their neighborhood who needs food support at some time in a month; volunteers spread the word to those reluctant to ask for help.

“More people are food unsure today than when I started,” West said. She’s been volunteering for 11 years, participating on the advocacy team.  ” You do not solve the problem just giving people food.  We need to change the systems –better housing, more and cheaper public transportation.  We cannot end hunger until we end poverty.” 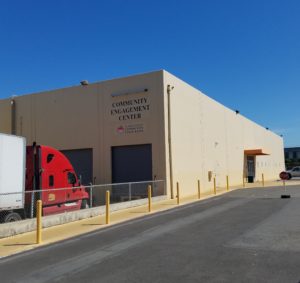 “The 2017 California State Budget finally repealed the Cal Works Maximum Family Grant, after 22 years of lobbying with a statewide coalition,” said Altfest.  The policy prohibited people from receiving increased welfare income if they have more children while receiving public assistance.  Critics called this policy racist and harmful to the poorest children.

The Food Bank also successfully pressed for a change that allows persons with a former felony drug conviction to be eligible to receive food stamps.

Policy change can be a long process fraught with seemingly little progress.  However, when successful, justice moves toward meeting a universal human right.

Alameda County Community Food Bank is more than a food distributor.  It is a safety net for our friends, family and community and a warrior for our most vulnerable.