Oakland Voices hosted a forum on high rents and displacement in Oakland on December 8th, 2015 at the 81st Avenue Library. Aqueila Lewis, artist and Oakland Voices correspondent, opened the evening with a powerful spoken word performance of her poem, “Where have the people gone”:

“Where have the people gone?

Who’s going to save them?

Who’s going to be brave enough to stop it? 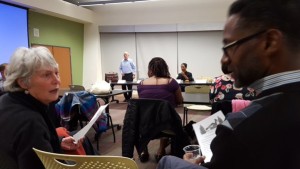 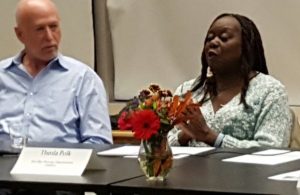 “It’s up to community members to make sure these issues are addressed,” said Siegel, who raised his family in Oakland. He offered several suggestions for how the city can help residents who are facing high rents. “City surplus property should be used for affordable housing,” he said.  He also believes that with the California State Law Costa-Hawkins in effect, the city cannot enact strong rent control.  Siegel suggested that voters campaign to repeal Costa-Hawkins so that the cost of housing can be stabilized.

“A lot of people are suffering with paying these high rents,” Polk said. “Some folks who have been displaced are now homeless.  What about the children?  A child will suffer if they do not have a home.  A child needs a home.” Polk believes that Oakland needs more affordable housing and that the community should fight for more two- and three- bedroom apartments for families.

Do D.A.T. grew up in Oakland and is frustrated to see families who have lived in a house for 40 years being forced to move in  three months due to foreclosure issues. He spoke about seeing the hipsters move in, and in his rap performance one of his lyrics said: “Yes they want the ghetto too cuz it’s by the Bay.” 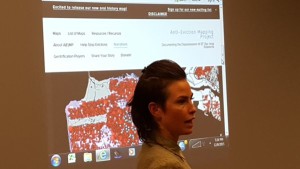 Wojczuk said  AEMP wants to make visible what is going on in the Bay Area with displacement and evictions.   Staffers did hour- long interviews with people about their stories of displacement, and those stories and the map can be viewed at http://antievictonmap.com . The group is currently focusing on stories from the communities of Fremont, Alameda, and Oakland.   Please contact them on their website if you are interested in sharing your story.   It is important to document what is happening in our communities and learn who the “Gentrification Players” are, listed on their website.

During the discussion, a local family came forward and shared that they were facing an eviction.   The family only had 60 days before they had to move.  The landlord is saying that he is evicting them so that he can remodel the home and raise the rent.   Siegel suggested contacting the Oakland Tenants Union at http://www.oaklandtenantsunion.org/, Just Cause/ Causa Justa at http://cjjc.org/ as well as their District 7 City Council Member Larry Reid and share their story in hope of getting some assistance. Oakland Voices members  followed up with the family shortly after the forum and Rosalinda Hernandez, Oakland Voices correspondent, assisted with Spanish translation.

One thing was clear during the meeting – Oakland is changing.  Rents are sky rocketing and the only way to effect change is to make sure our voices are heard.  New city officials will be elected in 2016, and I hope this community  unites and makes it very clear to the candidates that affordable housing in Oakland should be a top priority; it is critical to maintain the diversity Oakland takes such pride in.