When talking about the subject of guns or gun control in this country, we have to understand that just because we live in the same country doesn’t mean we share the same reality. Intersectionality plays a large role in American life, especially for people of color. So as a poor black woman living in a rapidly gentrifying area, when I give my opinions about gun control laws and whether or not I am for or against certain restrictions, I am not just talking about my Constitutional right to bear arms; I am talking about my safety and ultimately my life. 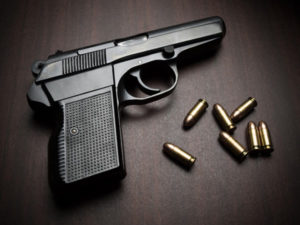 I have not had the privilege of owning a gun. Although I have also played around with the thought of going to a shooting range or going hunting within a specific season, I have never held a gun. In CNN’s Town Hall meeting, President Obama was mentioning to Anderson Cooper that when there is a mass shooting in this country, some people will go out and buy lots of guns because they have a fear that there will soon be restrictions on how guns are purchased. This was interesting to me because I am not in that minority. The more I hear about police shootings, mass shootings, church shootings in this country, the more I not only fear guns but fear those people who hide behind them.

I can honestly say that living within certain parts of the East Bay around poor people of color, certain things become real. Even if one has never seen the shape of a gun up close or the feel of cold steel against their flesh, the sound of bullets is unmistakeable. There is nothing safe about guns. I cannot imagine feeling safer because I had one around. From my experience and understanding so far in life, guns do not have the power to heal, to create, or to make things better…they just hurt, maim and kill. It would make me feel safer if I knew that the person who was in the possession of one had been through an extensive background check and that someone somewhere was keeping a log of who had them. That would be the start of me feeling safe.

Ultimately, what it comes down to is what is more important, bureaucracy or lives? I hope lives are.