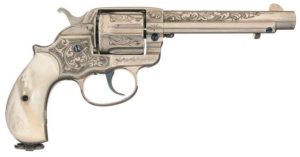 My earliest memory of actually seeing a gun is probably the gun my dad owned when I was a kid. It was a beautiful gun, or at least as I recall it. It had an ivory handle with a silver body. I think my dad grew up around guns in Mexico, so owning a gun to him wasn’t a big deal. People often use them to hunt or just for sport. However, my mom eventually made him get rid of it. Having a gun at home made her uncomfortable.

My first scary experience with guns was when my family moved to Iveywood in the 1990s. One night at home with my parents and younger brother, we were startled when we heard policemen over loud-speakers advising that if anyone was in the house they should stay low and away from the windows. A man, armed with a gun, had run into our backyard during a police chase. Unfortunately for him, our house is like a dead-end — big walls on two sides with barbed wire since our neighbors on two sides are businesses. They arrested the man but they didn’t find the gun. He probably ditched it along the way.

Around the same time, my middle brother and his co-workers were held up and robbed at gunpoint a number of times. It always happened as they were closing the restaurant where he worked. It happened frequently and it was scary. For a while, it seemed to happen almost every weekend.

Yet, I’m not afraid of guns. Sure, I probably would not own one and, yes, I believe that there should be more regulations involving guns. However, I truly believe that there are deeper, rooted issues behind the gun violence that is engulfing our society. At the end of it, it is a person who is pulling the trigger. I think that until we can face the issues at the foundation of gun violence — poverty, racism, hatred, lack of tolerance, mental illness, a disregard for human life, etc. — until then, we will not solve the true problem. But again, tighter gun regulations, in my opinion, is a step in the right direction.