The success of Everett and Jones barbecue as a business is based on the values that have sustained the family for over four generations.  Dorothy King, owner of Everett and Jones, reflected on her mother’s motivation to start the family barbecue business in 1973; “Her children were her motivation.  She always wanted her children to support themselves, be independent.” 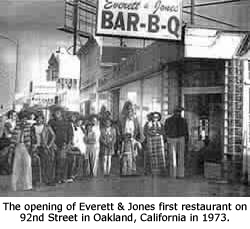 Families migrating from the south in the ’50s brought southern culture and cuisine.  For the Everett family, one led to another.

Dorothy and Cleveland Everett already had three children and one on the way in 1952 when they decided to move to California from the small Alabama town of Westpoint.  They would have five more children in California; yet Dorothy found herself a single mother struggling to provide for nine children after she and Cleveland separated.

Dorothy Everett was a giving spirit.  Even with nine mouths to feed at home. She would be the first in the neighborhood to provide a meal to families facing loss and tragedy.  Dorothy King, daughter of Dorothy Everett, remembered how her mother responded to a family in the community facing the death of a loved one. “She always gave back.  She would say, ‘We gotta take some food to the family,’” King said

Everett was employed as a domestic worker and tended a smoke pit part time to make ends meet. She had a vision and the determination to act on it.  She was known to say, “Dream a dream that makes you happy.”

She started her own barbecue restaurant with a loan from a close friend, Cora “the Angel,” in 1973. With $700 and a week’s line of credit from suppliers, Everett and Jones was born.

The first location was at 92nd Ave in East Oakland.  From its inception, Everett and Jones was a family enterprise with all siblings and their partners contributing to the business’ success.  If fact the name, “Everett and Jones” came from the married name of Dorothy’s daughter, Annie Everett-Jones.

Door- to- door advertising, free samples, and word of mouth quickly spread the word about the down home barbecue in the Town. After only a year in business, the family opened its second restaurant in Berkeley.  In 1975, the third Everett and Jones restaurant was open for business.

While celebrating three years of success, the family faced tragedy as a pit fire burned out of control, damaging the original restaurant beyond repair.  The family held together to reopen a new restaurant one year later only one block from the original location.

To see her dream realized, Everett stepped back from leading the Everett and Jones franchise to allow her children to take on leadership.  She told her children that with her at the helm, “You guys ain’t learning nothing.” She gave each team of children a restaurant.  In short order, one after the other began to struggle.  King said sibling rivalry did in her restaurant. “We would argue over who was in charge,” she recalled.

Eventually, all the restaurants failed except the Berkeley location.  Everett came back to save the family business, thoroughly disappointed that her children were not able to take the opportunity to become independent.

King, also disappointed with the failure of her restaurant, left Oakland for Denver, Colorado.  Her business savvy and her community commitment allowed her to become a leader in the African -American communities in Denver.  She turned her own negative experience with domestic violence into a determination to provide housing for women surviving domestic violence.

King became a housing advocate, providing a safe place for dozens of women to live. When she returned to Oakland, she continued her housing advocacy work, becoming a founding member and the first executive director of Dignity House West. Yet, the family business was calling her.

Today, Dorothy Everett’s daughter and namesake, Dorothy King, heads the family business with support from sisters and spouses, just like in 1973.  The difference is that, today, nieces, nephews, and grandchildren are working their way up the Everett and Jones ladder towards leadership.  King is preparing the next generation to do what she did.  She says that her mother’s legacy and her children motivate her.

The matriarch, Dorothy Everett, had a vision that spanned generations; “I always believed that God would make a way for us. I had a dream. I wanted to build something that my children could fall back on.  He answered my prayers.”

I am an Oakland native who grew up in the early 1970's. My parents moved the family to Texas in the 1980's to get my brother and me away from the violence of the neighborhood. I returned in the early 1990's for good. I became a classroom teacher and found my niche working with African American boys. I later began working in community based organizations. For over 25 years, I have worked in the Bay Area.
My interest in media grew out of my attempts to keep up with my students and their new forms of communication. I am ready to take my experience to the next level through training, peer exchange and doing.