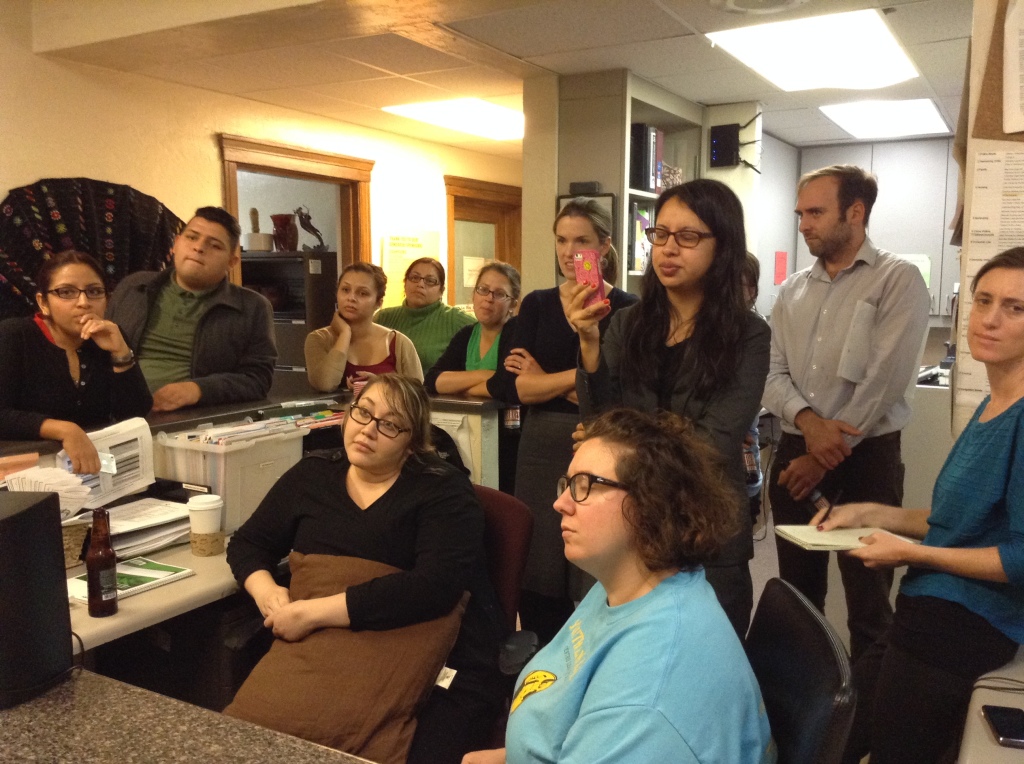 Centro staff gathered around the monitor during President Obama’s speech 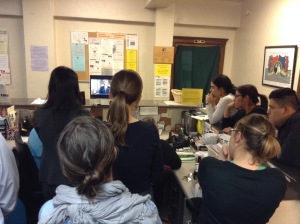 Fifteen minutes before the president announced his Executive Action on Immigration, top Oakland officials called Eleni Roubatis-Wolfe, Immigration Program Director of Centro Legal de la Raza. They wanted to know, like the many people who called Centro in the hours before the announcement, details of the administrative relief and the effect it would have on the immigrant communities of Oakland.

Located in the Fruitvale at 3022 International Blvd, Centro Legal de la Raza has been a pillar of justice for the Latino, immigrant, and low-income communities of the Bay Area for over 40 years. Centro, as it is referred to by the staff, provides legal assistance in the area of immigration, employment and housing and has earned a strong reputation in the Bay as a leading legal organization that has been providing training and workshops to organizations across the Bay. I am the operations and finance assistant for the organization.

On Thursday evening, Centro staff watched the announcement huddled around a 16- inch monitor by the reception area. Their feelings were mixed. On the one hand, 4.9 million people could benefit from Obama’s Executive Action, a much larger number of people eligible for administrative relief compared to Obama’s last Executive Order on Immigration (DACA) in June 2012.

The most recent action means that undocumented parents with American children will get to stay together and stop fearing the ever-present claws of deportation. Too often families are separated when one or sometimes both of the parents are deported and the children are left to foster care.

On the other hand, it fails to provide relief for the other 5-6 million undocumented people who fall into several categories – people who don’t have immediate relatives who are American citizens; couples and partners where one of them is undocumented but they don’t have or can’t have children; migrant farmworkers; those convicted of three or more misdemeanors (excluding traffic offenses);those with a significant misdemeanor of five numerated offenses; those who receive a sentence of 90 days or more; people with DUI’s and people with criminal convictions who have already paid their debt to society. (Unfortunately, these are members of communities that are stopped disproportionally by police officers due to racial profiling.) 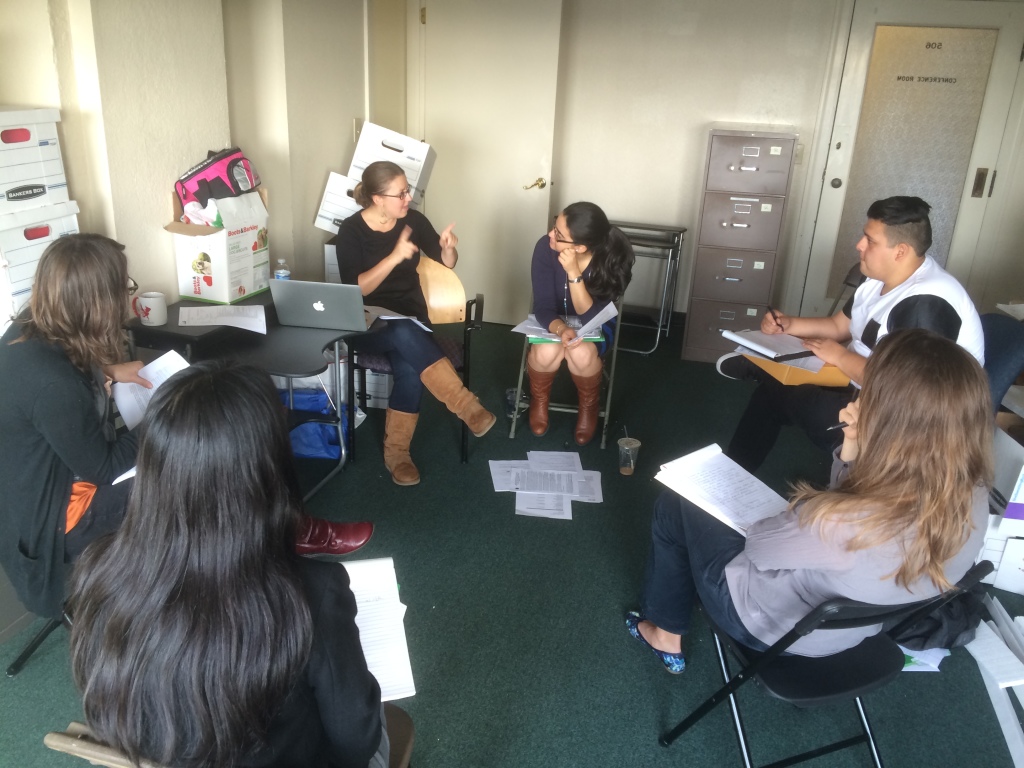 So, it is guaranteed that the separation of families will continue. Furthermore, the fact that the Obama administration has deported more people than any administration in history makes some immigrant rights advocates feel like this victory is more like crumbs tossed from the table to appease an unhappy Latino constituency.

For Wolfe, this is a step in the right direction. And there is a lot still to be done.

“While ending the threat of imminent deportation and being able to lawfully work will have a profound effect on our community members’ lives, it is not enough,” she said. “We must continue to fight for a comprehensive immigration reform that will end the devastating effects of mass incarcerations and deportations of undocumented immigrants.”

She lamented that “any kind of Executive Action should not be tied to increased enforcement because that will add to the separation of more families.”

Magdalena Guadalupe, Immigration Attorney at Centro  shared her reaction. “I wish [Obama] would’ve done more but I’m happy he did something to help some people. Hopefully this is a stepping stone for Congress to do something more,” Guadalupe said.

Unfortunately it is uncertain how much support Centro will be able to provide to those who qualify for administration relief.  Already, the immigration team has had to double in size to provide relief to the refugee children from Central America coming to the Bay.

“The kids are up against attorneys paid by the U.S. government to get them deported” said Claire Fawcett, Immigration Attorney at Centro. Access to an attorney can make the difference between life and death for migrant children.  For many, being deported is a death sentence because of the threat of gang violence at home. “With policies in place that speed up deportations, these children don’t have time to wait.” Fawcett says.

Centro Legal already has done intake on more than 700 unaccompanied minors from all around the Bay Area, and is representing more than 250 clients with more being added every week.

When asked about the most  impactful case to date Fawcett said, “It changes week to week. Recently it is a minor who witnessed gang members attack a member of their family with a machete and raped another family member in front of the child.” With such deep traumas, you hope that these kids are getting the proper legal assistance for a protection they are guaranteed under the law.

Without a doubt, there will have to be more funding for staff for Centro to continue to be the immigration leader it is in the Bay.

“We’re going to think as a group on what we can do and what we can’t do. We can’t work more hours than we are already working,” Wolfe said. “If we don’t get funding for increased staff, we are not going to be able to take a leadership role in the East Bay in terms of planning workshops, educating attorneys, and setting up Know Your Rights clinics because it’s not humanly possible. We need to get funding.”

As of 2011, there were an estimated 500,000 undocumented immigrants in the Bay. It’s possible that Bay Area non-profits will not have enough resources to provide the legal services necessary for people seeking administrative relief.   People have already started to come to Centro to see if they qualify. Centro is taking contact information on everyone who potentially qualifies and creating a database so it can call a community meeting once the details and legal intricacies are sorted out.

The applications will not be available to parents until May 19th, 2016. Centro is working closely with the Oakland City Attorney to make sure any fraudulent notaries and people falsely advertising expedited assistance are reported. These kind of fraudulent activities are already happening.

Bianca Sierra Wolff, Executive Director of Centro said in a statement on Thursday: “Centro Legal will continue to represent those who are not covered by the president’s announcement, particularly those individuals who are languishing in immigration detention centers and who remain separated from their loved ones.  We cannot rest until we are able to once and for all correct our unjust immigration system and finally let undocumented individuals move out of the shadows and live free from fear.” 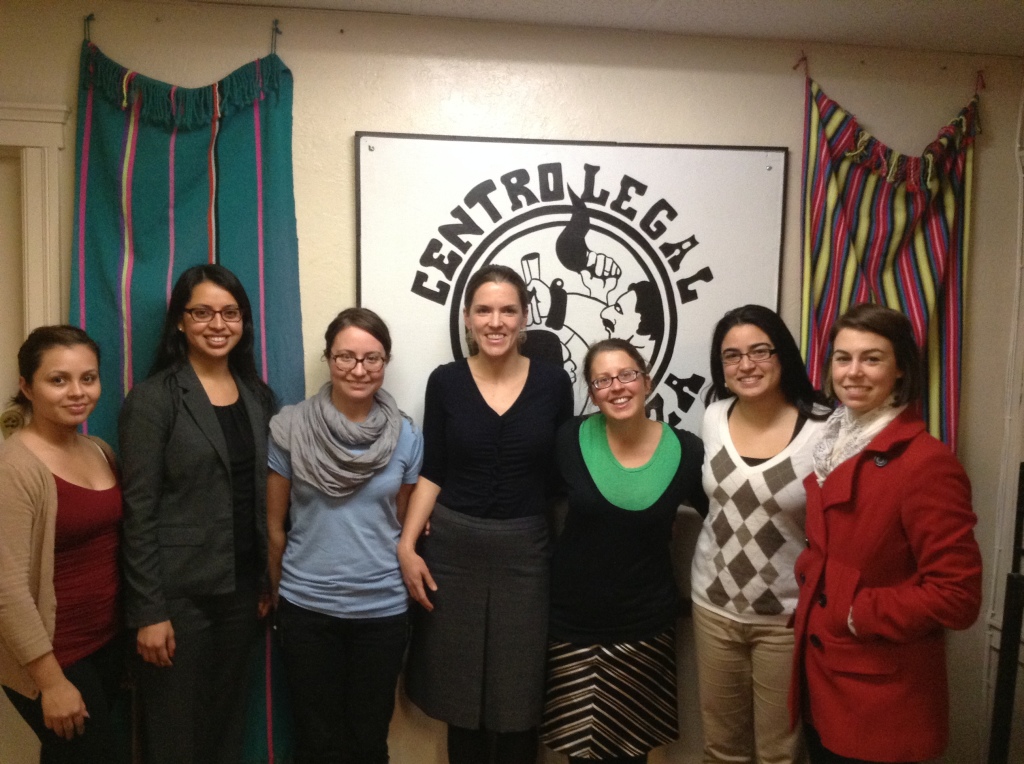 Some of Centro’s immigration team

(Some of Centro’s Immigration team)