Barbara Zavala – The Personification of Giving Back

The morning wash flapped in the breeze in the backyard of the Oakland Catholic Worker (OCW), near the corner of International Blvd and 50th, on a recent Tuesday morning. Upstairs, a young mother — a houseguest with her family of four from Guatemala — made breakfast in the kitchen with her toddler at her side.

Crammed into the small side office, eight neighborhood women paid rapt attention during this first day of fall ESL classes. In the front office, a case worker reviewed her notes before accompanying houseguests to medical appointments, work possibilities and to register their children at the local school.

Nearby, a middle-aged staff member was locked into his computer screen, planning an upcoming Peacemaking conference. Downstairs, several of the 14 houseguests did their daily chores: cleaning the bathrooms and tidying the lounge; organizing the trash/ recycling area which also serves as a neighborhood bike workshop each Saturday; and sorting supplies for Thursday’s food distribution which draws up 300 local residents weekly.

Moving briskly and often, minding each of these scenes, House Manager Barbara Zavala stopped for a few minutes in the large dining room to catch her breath and describe her work.

“I do everything related to running the house, which is mucho, mucho,” she said in a blend of English and Spanish and with a hearty laugh. “I’m busy all the time but I love it.”

Besides managing the house, Zavala oversees the preparation of hot lunches which are passed out twice weekly to 20 or so homeless or low- income people who knock on the front door. 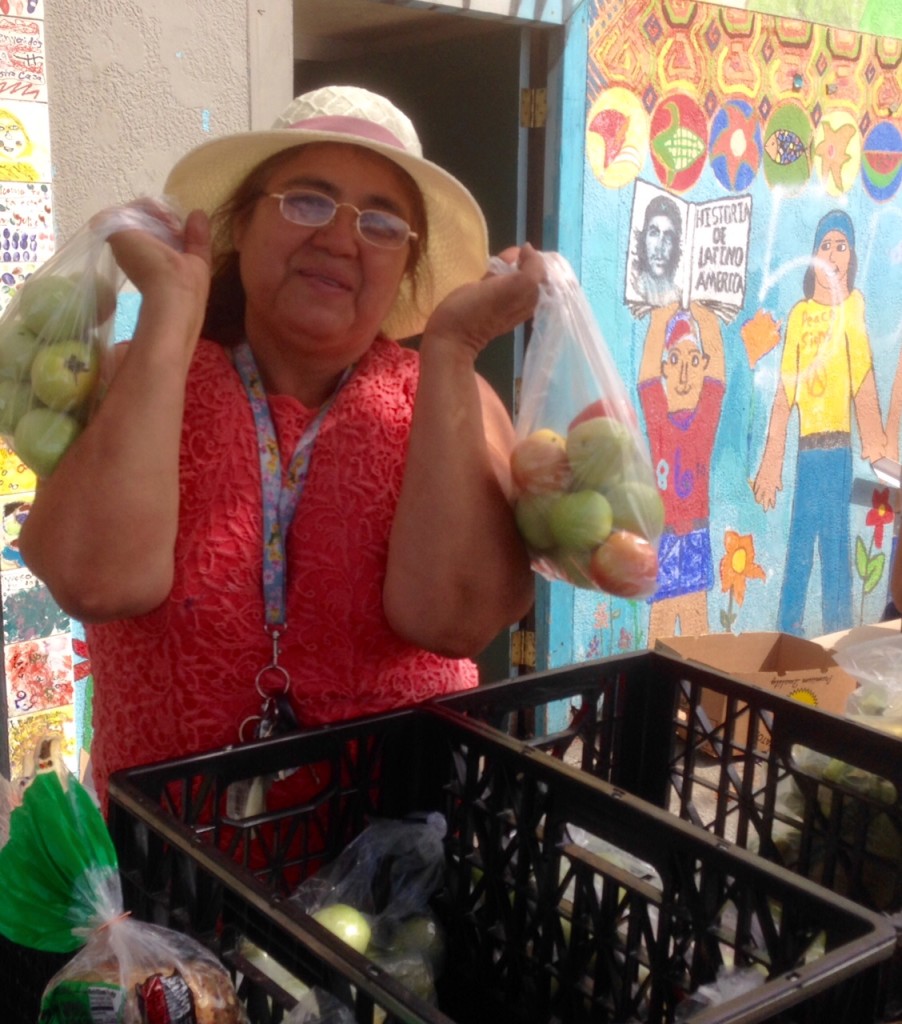 Every Thursday, her day begins at 7 a.m. when she starts passing out tickets for the weekly distribution of fresh produce and staples. (OCW is an Alameda County Food Bank –  designated distribution site). Zavala is familiar with many of the hundreds of folks — day laborers on their way to look for work, mothers dropping their kids off at school, people on their way to the laundromat or car wash — who return at 11 a.m. to gather supplies that help nourish their families for another week.

Zavala, who lives with her husband in the small front room of the two- story building, sets the rules and the tone for all the house activities. She budgets and makes all the purchases for the household — currently, three couples with seven children among them — not counting the four full time staff members who receive small stipends and the steady flow of volunteers who often snack around the large dining room table.

Houseguests, who are homeless and undocumented, stay for up to four months. Each adult is assigned a daily chore which rotates weekly and, along with Zavala, takes a turn preparing the evening meal.

“I had to make new rules for the house when I first got here,” she said. “It was hard to establish the rules, but it’s OK now. Everyone understands. I have a short meeting with the guests every week. I explain the rules and discuss problems. I make the schedule for chores and dinner. Sometimes people don’t understand the way we do it here. But little by little, poco a poco, explaining the rules, talking to them, it all works out. The guests are easy to work with and fun to be with.”

OCW, which opened its doors as a soup kitchen and shelter in 1981, re-purposed itself as a house of sanctuary for refugees fleeing the wars which raged across Central America in the 1980’s into the 1990’s. Several former seminary classmates teamed up with recent Salvadoran refugees to provide a safe place for Salvadorans and Guatemalans forced to flee the US-funded conflicts in their homelands.

They found respite, work, and saved money over several months before settling in E. Oakland. Since then, more than  1,000 refugees — economic refugees in more recent years, with many from Chiapas and Guatemala — have passed through its doors, including Barbara Zavala. 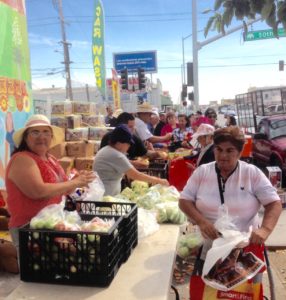 “I came from El Salvador in 1990,” she recalled. “My husband was killed during the war. It was very bad. I had to leave my eight children behind. I had to come to find work to support them. It was very hard.”

Zavala stayed at the OCW for two months, saving money before finding a room in a shared apartment. She worked constantly: cleaning houses,  providing childcare, and selling produce on weekends at a local flea market.

“I had so much work to do for my babies,” she said. “Working, working, always working. Seven days a week, all kinds of work.”

Eventually, she found employment as the cook in the home of the priests at the Jesuit School of Theology in Berkeley where she worked for nine years. “I liked working with padres very much. They sent me to cooking school for six months. I got to know the priests very well from all over — Mexico, Columbia and India,” she said.

All the while, Zavala sent money to El Salvador to support her family. Four children eventually joined her and still live close by. Meantime, her four other children and 10 grandchildren live in the house which she purchased in her small hometown near Cabanas, where she will visit this December.

“It’s much better there now,” she said. “There are some gangs but it’s nothing like the war. I’m so excited to go back. All of my family will be there, all of my brothers are coming back, one from Honduras. When I’m with them, I’m so happy. I love being with my grandchildren.”

She worries about the OCW house in her absence.“People come day and night,” she said, “looking for work, needing help with something. Someone needs to be here.”

She paused for a moment and added: “I love this house. I love working with all the people, everyone — guests, staff and our many volunteers. I like talking with people in the food line as they pass through. It’s hard to describe. I just love this place very much.” 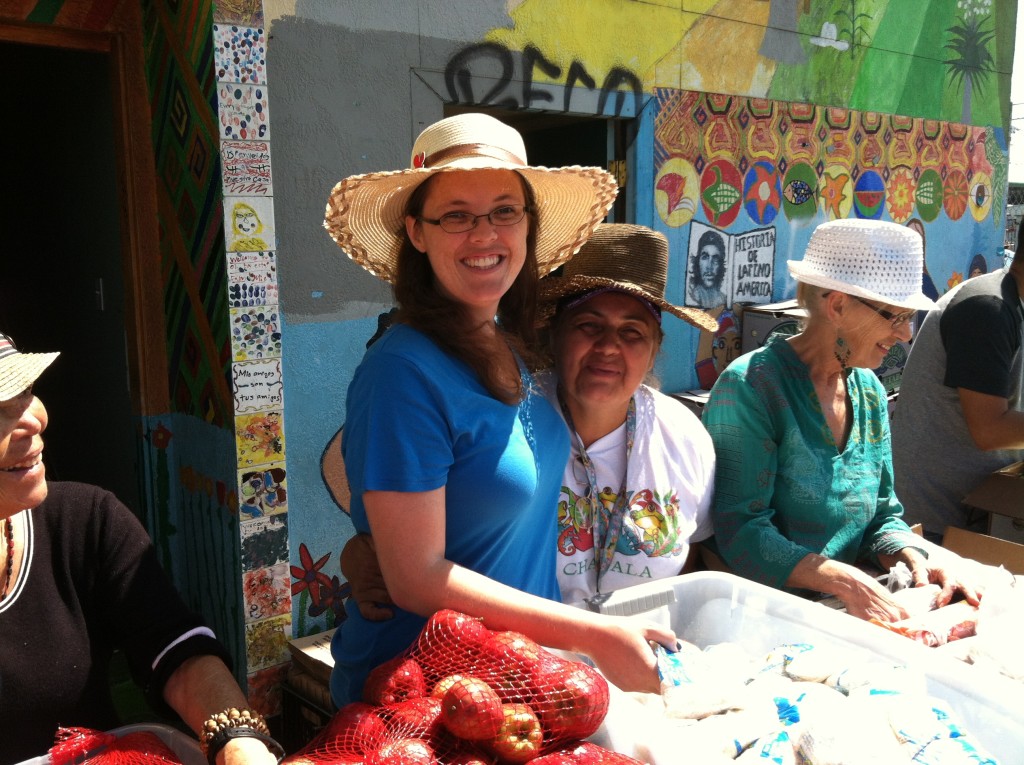 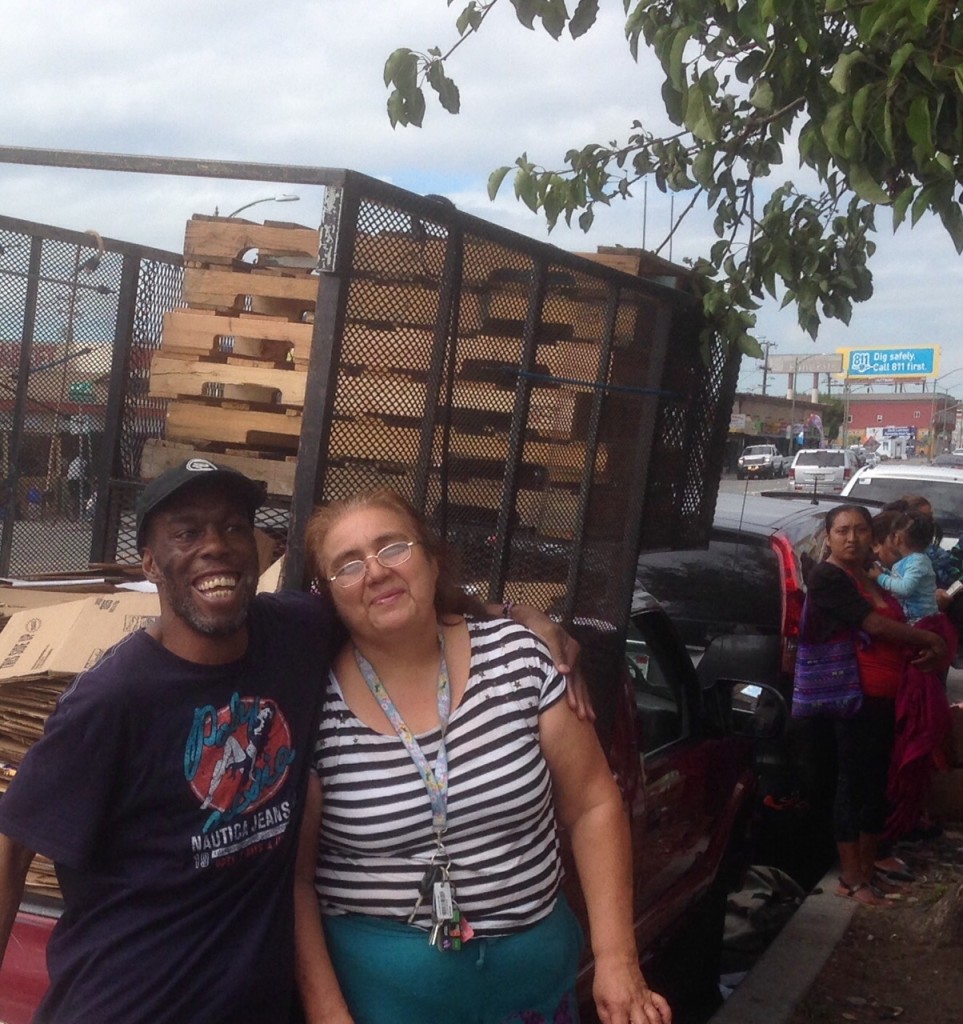 Volunteer Jason Gray and Zavala at a food distribution