The six- feet high, 30- foot long The Tree of Life mural-on-canvas sweeps across the entrance of the Oliver Art Center at the California College of Art (CCA). A vibrant tree forms the center of the visual tales of the artists’ journey from Honduras, El Salvador and Guatemala.

To the left, are deadly scenes of village life: along a field of ripening corn, a gunman points his weapon at a young woman. Below, a man with a machete stands over a decapitated body. A paved road leads to the border and scenes of prison corridors and jail cells.

At the base of the Tree of Life, a young person rests, leaning her head against the trunk, dreaming of her future. Then, there are scenes of children painting a mural — a mural within a mural — a woman holding a baby in the stars and stripes and a girl holding up a US passport, symbols of freedom and legitimacy.

Snapshots of village scenes form the border of the mural. Many are innocent: a flower in bloom, a hand touching a bible, a donkey pulling a cart. Others are more ominous: a family massacred, a helicopter flying overhead, the border wall.

The Tree of Life is not the work of a single artist. Rather, it is the collaborative work of 55 young artists, immigrant children — or, as they have become known in the media, unaccompanied minors — in juvenile detention.

The images of wave after wave of immigrant children who flooded the southern border two summers ago have largely faded. Yet, the number of such children fleeing the poverty and particularly the violence of drug trafficking in their Central American homelands is swelling again.

The number of children making the harrowing journey across Mexico to the U.S. border is on a pace to surpass the surge of 2014. (See references below).

While media attention has receded, the stories of immigrant children remain largely untold. The Tree of Life, unveiled on the west coast for the first time at the recent Border Fracture Conference at CCA, tells those stories in visual form.

With fellow artists, Claudia Bernardi, professor of diversity studies and community art, facilitated the creation of The Tree of Life at a juvenile detention center and brought it to CCA as part of the conference. Introducing the mural to an audience of 50 or so, she described her role as an “ambassador” and the mural as “the way to see the crisis and violence at the border from the perspective of the minors who crossed it.”

Bernardi’s work as a community artist is rooted in her experience as a young person coming of age during Argentina’s “dirty wars” of the 1970’s. She held weekly art classes with Central American refugee children in East Oakland through the 1990’s into the early 2000’s.

Later, having participated as part of the Argentine Forensic Anthropology Team in the investigation of El Mozote massacre in El Salvador, she decided to return to El Salvador to establish a school of art and community development. While teaching a range of artistic techniques, she took care to let local artists explore and express their individual and group memories of the long civil war.

The school, which continues under local leadership, served as a template for her continuing work with people experiencing civil conflict from Guatemala to her native Argentina to Northern Ireland. The most recent expression of this model is with immigrant children in U.S. detention facilities, the result of which is now on display at CCA. 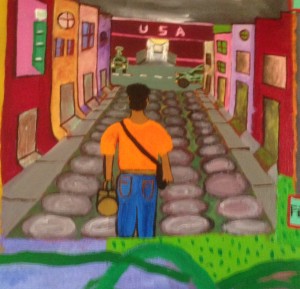 “The migrant children are saying that the violence they see in their countries is replaced with violence at the border, if they survive the journey,” Bernardi explained. “Many give themselves up because they feel it is safer to be in a U.S. jail than being in the middle of narco and human trafficking at the border. Freedom is not an option. Now they are dealing with the criminal justice system.”

Murals traditionally celebrate historical figures and events. This mural, Bernardi said, “is a continuous present tense. For these kids, there is no clear way before them.”

She highlighted particular paintings within the painting and talked about the artists, each of whom she knows: the 14- year old Guatemalan girl trapped and peering out from prison; the Honduran boy who buried his father one day and left for border the next morning.

Of the more than 57,000 children detained during 2014, roughly 90 percent have been placed with parents or close family members. Alameda County continues to absorb the second highest number of unaccompanied minors in California. More than 400 are currently students in the Oakland public schools where they have case managers and receive mental health services. They are the fortunate ones.

Paradoxically, perhaps in part because of its persistent bright colors, The Tree of Life evokes a spirit of hope and possibility. The tree is strong and sturdy. The last scene on the 30- foot panel shows a boy and girl waiting for the car of family members coming to pick them up and take them to a new beginning. 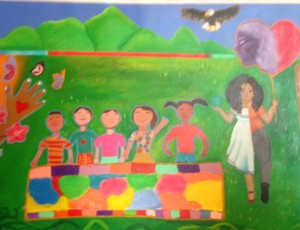 In Bernardi’s words: “before starting the long journey to the North, the unaccompanied minor had dreams and hope that now feel unreachable. Their past is filled with stories of poverty, threat, narco traffic and death. Their present is perilous, fragile. It is unavoidable to ask this question: How can I help you? The images are very small, very silent, like their stories. Come close to see what they have to tell you.” 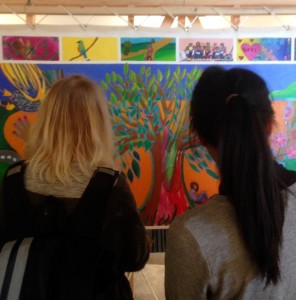 Please note that The Tree of Life mural is no longer at CCA but will be on display from April 4 to April 22 at: Multicultural Community Center (MCC) Room 220, Martin Luther King Jr. Student Union (MLK Building)
UC, Berkeley Corner of Bancroft and Telegraph Phone: (510) 642-6528

Current statistics from the Department of US Customs and Border Protection (http://www.cbp.gov/sites/default/files/documents/BP%20Total%20Monthly%20UACs%20by%20Sector%2C%20FY10-FY16TD-Jan.pdf)

And, regarding the response of the Oakland public schools —
http://www.npr.org/sections/ed/2015/10/20/447014644/a-year-later-the-school-system-that-welcomed-unaccompanied-minors