I called Acta Non Verba (“ANV”) to see if I could stop by for a tour of the farm and to interview Kelly Carlisle, the founder and executive director of the organization. Little did I know that the phone call would lead me directly to her. Carlisle answered the phone. I briefly introduced myself and asked if I could come to the farm to take pictures and interview her.

“Can you be here in 20 minutes?” Carlisle said. Another group was coming to tour the farm as well. Like any eager reporter, I said yes! Twenty minutes later I was hopping off of Uber on the corner of 83rd Avenue and E Street.

At the ANV office, Carlisle greeted me. Carlisle talks and walks; all you have to do is spend a minute with her and you’ll see that she is very much a woman on the go.

According to the ANV website , Carlisle is a veteran of the United States Navy and the recipient of many awards, including the Navy and Marine Corps Achievement Medal. She is also an an Alameda County Master Gardener. A native of East Oakland, she has been working with youth since she was 14. The minute she starts talking about her work, you see her passion for making her community a better place.

“There’s been a huge increase in obesity and diabetes. There’s an almost 40 percent dropout rate here in this area,” Carlisle said.

The farm is located across the street from the offices of ANV, in a corner of Tassafaronga Park in East Oakland. It was a gorgeous afternoon, the other visitors and I sat under the redwoods to learn more about ANV and Carlisle’s goals for the farm. Her philosophy can be summed up by “deeds, not words”—the literal translation from Latin of the name of ANV.

Carlisle said she was inspired to start ANV by the readers’ comments about San Francisco’s Kindergarten to College Program. “The comments were so negative,” Carlisle said.

Some said that the children benefitting from the program had no future and the program wouldn’t help get them out of their situation.  “Who gets to decide?” Carlisle asked. “The idea that kids can’t make it through 10th grade hurts.”  You can see the pain it brings her as she says it.

Carlisle decided that, like the San Francisco program, she wanted to come up with a way for children from East Oakland to invest in themselves. And so, ANV was born.

One of the primary goals of ANV is to create a safe place for the youth who participate in the program. ANV recruits low-income students, ages 5-17, who are interested in working at the farm for one or both of the growing seasons.

Carlisle loves to garden and she wanted to bring gardening to an area where gardening isn’t an integral part of the community. Carlisle wanted to show children the actual skills of how to grow food because she feels this is important for children growing up in neighborhoods that have suffered from poverty, crime, and a history of institutionalized marginalization.

She also wanted the family members to see their children actually working and being able to provide fruits and vegetables from the farm to their families. The ANV staff believes that the skills of caring for a farm and the crops will empower the children to excel in their future endeavors. In addition, ANV provides the children with extra-curricular activities that are often not available due to lack of opportunities, resources, or both.

When ANV first started, the staff passed out flyers to get the word out in the surrounding neighborhood. Carlisle also has helped with the gardens of nearby schools. ANV has a small staff and benefits from community volunteers.  (Click here to volunteer). 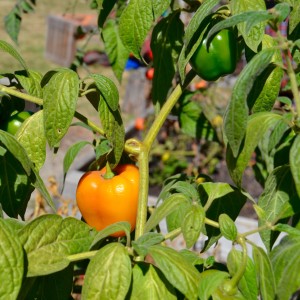 In 2011, ANV signed the agreement for the land at Tassafaronga Park with the City of Oakland. Compost is generally donated by Waste Management and ANV does not have to pay for water as the city provides it for free. The organization also receives plant donations from nursries  like Annie’s Annuals and Perennials. Recently, the water was shut off for a month as the City did some repairs at the park, which posed some challenges.

However, on the day I visited, the tomato and pepper plants looked great and it amazed us all that it was the first time in weeks that ANV was able to water the crops.

“A great example was this one time when we grew purple broccoli,” she said. “No one wanted it. Towards the end when we were harvesting it, a man from the community who had been helping asked if he could take it home to his mom. Get this, he took it to her as a bouquet!” She described the reaction when she grew different colored tomatoes. “When people saw the black tomatoes for the first time, they were like what is that?” Carlisle said. Again, no one wanted to go near them.

“There is so much that I see in ANV’s future. I really want to expand the Community Supported Agriculture (“CSA”) program,” Carlisle said. Currently, ANV provides vegetables to some local restaurants through a CSA. ANV is currently working on proposals to provide after-school programs for the housing developments around Tassafaronga Park. Drip irrigation is one of Carlisle’s dreams for the farm, and a way to save water during the current drought crisis.

“I would also like to start a mobile food stand that can be moved around the community,” Carlisle said. And of course, Carlisle would love to obtain more land; specifically she hopes to obtain a piece of land where she could start a Veteran’s garden, another passion of hers.

In the meantime, Carlisle is moving forward with ANV and making a difference with every step. There are struggles with having an open farm in East Oakland. Someone fully moved into their greenhouse—“matresses, poop bucket, snacks, everything,” Carlisle said. The vandalism, however, hasn’t been too bad.

Still, ANV is trying to make a difference in this community. As we sat at the farm, young people, ranging from middle schoolers to teens just out of high school, appear to be smoking on the benches at the park next door. This scene illustrated the importance of Carlisle’s idea for ANV. The kids in our community have a high drop out rate and face many dangers. They need programs that will give them options. Carlisle, ANV and the farm are exactly that.