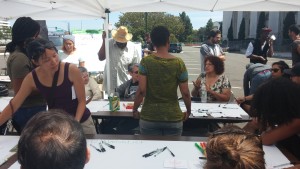 At the East 12th Street Wish List planning forum last week, affordable housing activists and community members gathered under tents to exchange ideas, listen to music, and brainstorm about their community vision for a hotly contested small parcel of land at the southwest corner of Lake Merritt– the E. 12th Street parcel. From a stage, Comedian Sampson McCormick entertained the crowd by reading city court documents in a fiery preacher’s voice.

“This is exactly what the city should have done all along,” said Monica Garcia. She and the other event organizers wanted to involve people whose voices are often not heard regarding public real estate dealings.

They met at city hearings about the parcel, through the citizen’s action group called Eastlake United for Justice (EUJ).
EUJ challenged Oakland’s City Council on its proposed sale of the long-vacant land. The sale to Urban Core, a developer who proposed to build a 300-unit luxury condo high rise, was nearly approved.
EUJ and other community members pointed to a California law that states that surplus property must be offered to affordable housing developers first.
“Consideration of low-income residents isn’t a conversation that is happening in Oakland”, said Brytanee Brown, one of the event organizers. “It’s all about market- rate housing. Who is that for?”
So on a Sunday afternoon, in the parking lot of Henry J. Kaiser Center, the stage was set for a true community dialogue. About 50 attendees participated in a round table discussion about what they love about Oakland, what the challenges are about living here, and what they would like to see built. 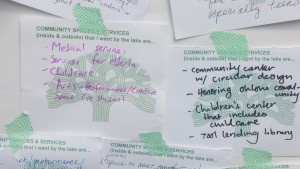 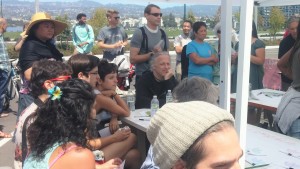 Participants wrote their thoughts on index cards and posted them to an idea board.
Though affordable housing was the central issue, suggestions went far beyond a simple block of apartments. Ideas ranged from vegetable gardens, to small store fronts for community classes, to a walk-in clinic and even a public indoor pool. Oakland Unified School District representatives announced they are considering submitting a proposal for affordable housing for teachers. 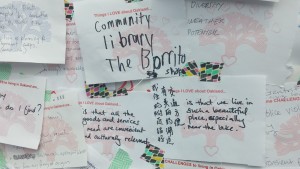 “You CAN increase the number of residences in this city without pushing out historic residents,” read one of the messages on the idea board. “Invest in public housing, not-for-profit housing, cooperative housing. There are many creative solutions, it is just taking time and patience to explore and take risks.”
“This area is becoming more and more exclusive in terms of the housing that’s available,” said Kiernan Rok, an East Lake resident and Oakland public schools educator. “East Lake is one of the last affordable neighborhoods for middle- and lower-income people. Historically it has been a landing spot for immigrant communities, and I’ve already seen it changing in the last 10 years.”
Back on the stage, performers from Urban Youth Radio sang songs honoring family and “the 510” to a cheerful crowd.
Children flopped in the bounce house; the smell of cooking hot dogs filled the air and speakers took turns at the mic to share their stories of connecting to Oakland through business, activism, and community building.
Irene Van, with VietUnity, said she had gone door to door to encourage the participation of Vietnamese elders in East Lake. She found that many didn’t know about or understand the controversy around the East 12th Street property.
“We are a people who have been through war, displaced, kicked out of our homes, and at some point enough is enough.” Van said. “For us, part of this conversation is building solidarity with other communities of color.” Van said some elders she spoke with wanted a tutoring center, as well as affordable housing.
As the afternoon was winding down, a warm informality settled on the crowd. People spoke to one another in small groups; at the round table, people talked with architects and urban planners about design concepts for the parcel. Sketches showed terraced gardens, an alley of studio bungalow units, playground spaces, and many other unexpected features. 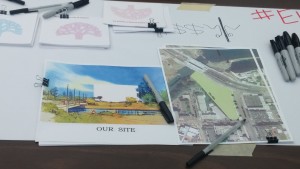 The Wish List gathering highlighted the come-as-you-are style that is a hallmark of Oakland in general, and East Lake in particular. It also illustrated the serious need for communication with the powers- that- be regarding a development that reflects East Lake and its many vibrant communities. With enough voices, perhaps they will be heard this time.