The first thing that catches my eye is the middle-aged blind guy with his cane across the street. He and a man roughly the same age stand at the corner in front of Taco Bell. As the pedestrian signal flashes, they start across MacArthur, the assisting man holding the other’s upper arm. I can’t tell if they’re friends or they just met up at the corner. There’s an ease in their interaction as the companion says he’s going to hit the pedestrian signal to cross 35th at MacArthur. I follow them across this busy intersection and they part company at the sheltered bus stop. 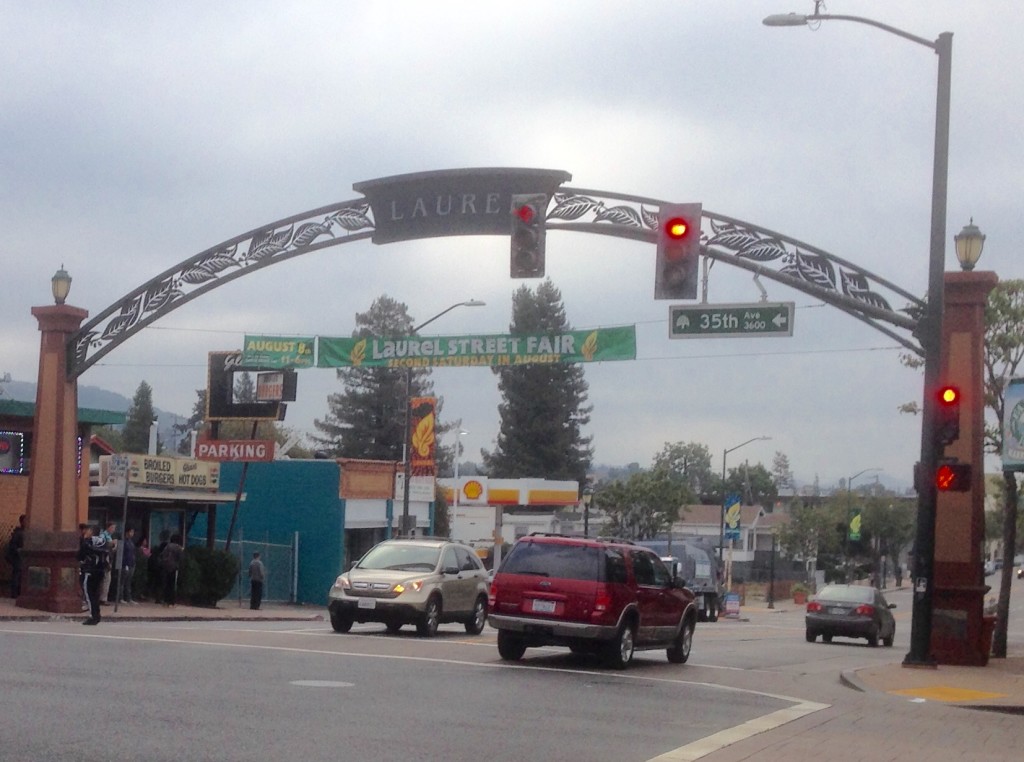 8:30 AM at 35th & MacArthur is not the hyper swirl of activity that I had imagined. There’s steady traffic to be sure, but the four corner bus stops are not overflowing with commuters. In another week, this will change when students will swarm the corners on their way to nearby schools. Now there are a one or two folks waiting on the northside. Larger groups —  no more than seven or so, representing the diversity that makes Oakland unique — hang out on the opposite side. Many work their smart phones to pass the time before heading to the hills or down to Fruitvale BART or the alternate paths to either East Oakland or towards downtown perhaps all the way to San Francisco.

I notice the steady grinding of traffic as I take a seat by myself on the corner bench, a kind of overflow spot for peak travel times. Some drivers accelerate hard to beat the light; others just drive way too fast for these crossroads. Pick-ups and bigger trucks rumble by. Buses slide around corners, sometimes sounding off an air brake. But most cars pass through smoothly on their way to morning destinations. Intermittent pauses at the change of signals break the noise briefly before it picks up again.

I begin to track a man, dressed casually with head phones and working his smart phone. He visits the four corners: Taco Bell side to Farmer Joes’s  and onto LaFranchi’s. He exits with a Gatorade in hand before finishing the circuit by crossing the street to the 54 stop. He peeks into Metro PCS, but returns to his smart phone and waits. A few minutes later, my gaze drifting elsewhere, and he’s gone.

In his place, I pick up a middle-aged, stooped woman with a hand cart. As she pushes it slowly across 35th, she hobbles to one side. She is favoring a slender left leg, walking in slow jerks. She’s not oblivious to her slow pace but apparently accepts that drivers will notice. Her cart is full of laundry with folded towels just under black garbage bags, no doubt returning from the laundry mat just up the street. She leans against the pillar which marks the entrance to the  Laurel District. A half dozen folks of mixed ethnicity wait for either the NX express to San Francisco or the 57 heading downtown. No one offers her a seat but she seems content, now leaning on her cart.

I keep an eye on her to see what happens when the bus arrives. The driver lowers the stairs for her and turns his head, following her as she finds her seat. There’s no verbal interaction but just direct, professional attention before he pushes off into the intersection.

I look the other way for the blind guy who’s still standing just off the curb waiting for his ride up the hill. The 54 apparently runs less frequently than the MacArthur lines. A crowd has gathered, mostly seated. The blind man is talking to another guy at his side. I decide to wait to see how his interaction goes. The bus pulls up and, as the doors open, folks wait for him to board. Again, the driver is businesslike, more preoccupied with the last rider’s bus pass, seeming to question it authenticity

The contrast of ambient sound is striking as I pedal my bike the five blocks home. I leave behind the steady drone of traffic. As I turn the corner at Kansas St., a mom is walking with her daughter down the street. I hear birds again and a dog barking. A lady sneezes behind a closed screen on what will be another sweltering August day.