A Ride on a Cable Car

I occasionally glance over at the photo of my sister Peg which sits on the window sill near the kitchen sink. It’s an unframed snapshot that at times slides cock-eyed into a slit in the little shelves next to a coffee grinder, clock, flashlight and other knickknacks.

Her fist wrapped around the front pole of an overloaded cable car, she’s looking back at me for a second because I told her to. I think that’s my hand around the pole just above hers, the rest of my body leaning back with the Kodak Instamatic. She’s clear-eyed and smiling, with the recognition that this shouldn’t really be happening. 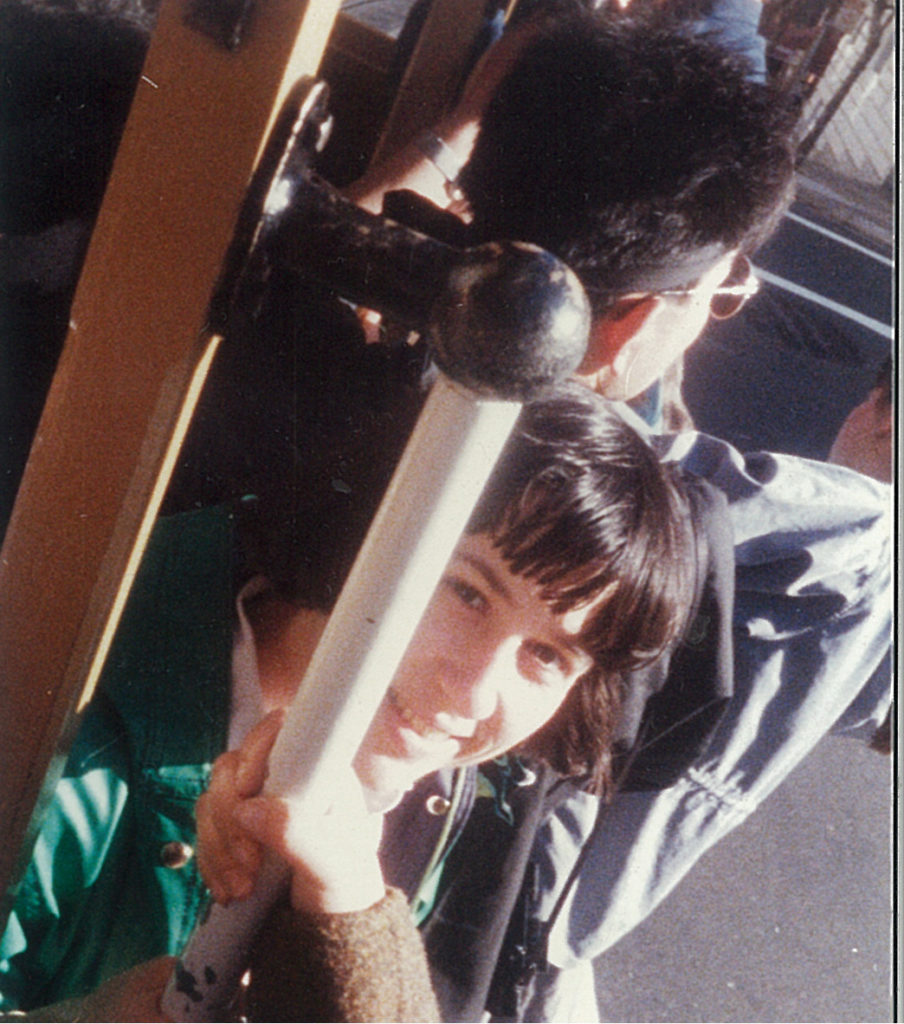 No, it shouldn’t be happening with the pin in her ankle, the result of being airborne from the leap off a second- story balcony several years earlier. Come to think of it, it’s pretty crazy that our parents — alarmed by my recklessness and sitting safely inside — had flown across country with her at age 32 for this Bay Area interlude.

The trip happened during a brief window when — despite thousands of seizures, and thousands more ever-changing handfuls of pills to control both the seizures and her sometimes violent response to her plight — Peg seemed to be finding her place in an adult program back home in Pittsburgh. She was even negotiating buses on her own in downtown Pittsburgh. In the moment of the photograph, she’s holding on for dear life on the jerky ride up Powell Street as any sane person would.

That week — which included hang out time with her favorite cousin, Julie, in Sausilito, wine-tasting in Sonoma, and catching both Bobby Hutcherson shows at Kimball’s — marked a kind of “last hurrah” for Peg. Her severe form of childhood epilepsy had eluded control by medication; both the disease and the treatment heightened a certain over-sensitivity. The diagnosis of schizophrenia had stuck with her by early adolescence, unlike any treatment regimen.

Ironically, a trial placement which moved her from a gothic-style institution in the backwoods to the big city had brought a degree of real world engagement. Work training opportunities and closer proximity to family had shown promise. Regrettably, and maddeningly, this trial would shortly end. The powers-that-be would rule that Pittsburgh was “out of county”  and mental health clients had to receive services in their home counties.

Still, this photo gives a glimpse of the resiliency that led up to it: the little girl who outperformed her older brother in the classroom through primary school, and perhaps, the reason for his relentless teasing; the separation from family at 12 to live in distant “institutions” in open wards with similarly stressed women two, three, and four times her age; the long slog through mental health settings more intent on locking people up than figuring out how to make it unnecessary in the first place. It’s enough to make you mad.

I think I bottled a bit of that rage, for a time with real bottles, before figuring out that it could find its expression in classrooms and schools to let kids and schools know that it didn’t have to be that way. I know during my career in special education, I pressed some administrators and colleagues while doing what I could to make students know that they could do much more than what was expected of them.

My brothers found similar career paths; the way out was the way in. Jim, while railing against absurd caseloads, steers blind people through big city streets and college campuses until they can do so themselves. John, livid at the distraction of endless paperwork, gets kids with limited cognitive skills on bikes so they can join their non-disabled classmates on rides. Pete pushes elderly folks a little further, stretching out their lives in bodies and minds that are slipping away.

Peg died from cancer 15 years ago, but she left her mark.

She never should have hopped on that cable car, which made it all the more reason to do so.