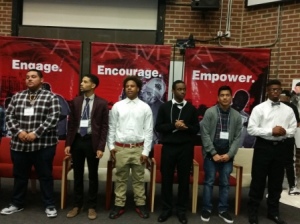 All of the young men in the picture were asked, “What two things keep you in school.” Sixteen-year-old Luis Ramirez, shown second from the right, answered, “Number one, the love and support I receive from my family, friends, mentors and former teachers and number two the need for a diploma to get a job.” The other young men shared  their top two reasons and other speakers inspired the attendees to become societal givers. Our black and brown boys need more educational options instead of exposure to cycles of violence, which increases the need for programs like Ceasefire and Oakland Unite.

Oakland has a choice. Invest in our children now or pay later to salvage wrecked lives. I prefer Wilson’s, “Community Ready,” approach given in his message ( http://youtu.be/tzdcFVP8xD0 ).