Her Resilience: Women in Control of their Own Image

Early in the morning on April 5th, 2014, the body of a young woman by the name of Kimberly Robertson was found, raped and beaten in Oakland’s F.M. Smith Park.  The incident took place just down Park Avenue from where recent college graduate Hazel Streete lived at the time. She said: “I’m no stranger to violence; I grew up in Richmond. I’ve witnessed gang shoot ups, all kinds of things. But for some reason this incident in my adult life, this struck me.” 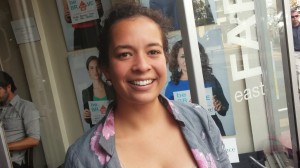 Streete read an article by Yasmin Golan about the murder that touched her deeply with its final haunting line: “all that’s left of Kimberly Robertson is a handful of wilting flowers.”

“And that just… I would go to bed thinking about it, I would wake up thinking about it, it was in my dreams, just that particular line.” Streete recalls. “And so I woke up one day and I was like ‘Why don’t I do something about it? Why don’t I make a mural?’ At first it was intended to be a memorial for Kimberly Robertson, but I realized really quickly that it’s an issue that affects women all over Oakland and outside of Oakland, and across the world.” Thus the project “Her Resilience: a Mural for Women Affected by Violence” was born.

Streete is a born project manager. She realized she needed a team to help, so she reached out to the artistic community and met Nicole Gervacio, who became lead artist on the mural. In an e-mail, Gervacio spoke of what inspired her to get involved: “We have many goals with this project: to create an image to remember and respect for the women the community has lost to urban violence… and to provide and portray the female body in a respectful and beautiful way.” Gervacio and Streete decided the the mural should focus on images of women– actual women from Oakland’s communities of all races and ages– who have lost their lives due to violent acts.

To do so, Streete additionally gathered a team of women mainly from her community at Mills College (she holds a bachelors’ and master’s degree from the school).  Gabrielle Rae Travis, for example, is in charge of Community Outreach on the project. Streete felt her “soft skills” were needed to respectfully portray the women whose faces appear in the mural, namely a longtime connection with Oakland, grassroots activism,  and skills in journalism and poetry. Travis was tasked with reaching out to families who are in the process of grieving, and helping them tell their stories and share the images of their lost loved ones.

Elizabeth Welsh, project and policy organizer, is a professional grant writer, and Streete tapped her to help with the legalities and finances. She said “finding time to work on this project was not always easy, but it was always a labor of love.”

“The leadership is going to be entirely women. I know that sounds extreme… but I think the world has a lot that is 100% men, and so I think it’s fair to have at least one space that is intentionally led by women,”  Streete said.

The next step was finding a home for the mural. The team looked at FM Smith park, but because the park is an historical landmark, the Parks Department would not allow modifications to the structure. The “Her Resilience” team members even started an online petition to the city to put the piece up, but after consideration, they chose to move  somewhere else that would be more visible from the street. They looked at businesses in downtown Oakland, but came up against difficulties getting the necessary permissions.

On Park Avenue, about a half mile up the street from FM Smith, is the Park Community Garden. It sits on an empty lot slated for a housing development project that never materialized, and is currently used as a shared garden space. Here “Her Resilience” finally found a home for their mural.

Now that “Her Resilience” has a home, the project has nailed down a timeline: the painting will begin on Valentine’s Day, (Feb. 14th), 2015, and is set to be unveiled for International Women’s Day, March 2nd, 2015.

Park Avenue Garden caretaker Tobias Barton expressed his take on Streete’s struggle to get the mural up: “Everywhere these women went they were told ‘no’ by some white man.” Streete laughed when I told her this and said “As a young woman of color, it could be easy to get stuck on that and just stop. So I’m calling upon other women of color and all our supporters to say ‘yes’.”

“I think Her Resilience is something Oakland needs. Oakland wants this, it’s just a question of who will step up and do it,” Streete said.

Her Resilience is seeking funding to continue the project. You can watch their fundraising video here: