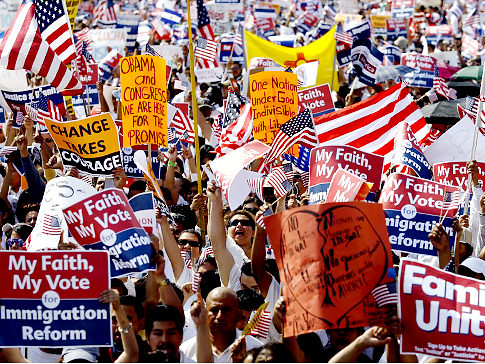 Reactions to President Barack Obama’s Executive Order on immigration drew mixed responses from East Oakland residents. Known formally as the “Deferred Action for Parental Accountability and Expanded Deferred Action for Childhood Arrival” programs, these actions were long in coming but surprisingly unspectacular by all counts, with the exception of ideologically-opposed, law and order conservatives.

According to the National Immigration Law Center, the president’s order directly impacts the following groups- certain undocumented parents of U.S. citizens and lawful permanent residents will not be deported; youth who came to the U.S. as children will have temporary permission to stay under a “Deferred Action” classification.  These programs are expected to help 4.4 million people, according to the Department of Homeland Security; most of them  have lived continuously in the United States since January 1, 2010  and have not been arrested for a felony or some misdemeanors.

Conversely, several groups are not covered by the executive order.  Presente.org reports those groups include the parents of DREAMERs (those who were brought into the U.S. illegally by their parents when they were children), seasonal and agricultural workers, LGBT immigrants who don’t  children, women victims of abuse who have escaped their spouses, black immigrants who are already jeopardized by a higher risk of racial profiling, immigrants who have a prior criminal offense but who have been rehabilitated and people living in border communities who will experience a further spike in immigration enforcement by the highly-militarized border and its attending culture.

Those who were either directly impacted or who have family members or friends affected by the order were bitter-sweet. They said it was welcomed as one, small, step forward – but no more.

Carmello Zavala, an immigrant from El Salvador who was granted asylum more than 20 years ago when he fled the bloody civil wars in his country, was happy to hear the announcement.   However he felt “…more needs to be done so that others not covered can find hope.”  Similarly, Esperanza Adamas, who immigrated from Michocan, Mexico many years ago, hopes further changes will be made “…for the sake of family members currently living in the United States.”

East Oakland resident and San Francisco State Professor of Native American Studies Andrew Jolivette offered qualified support of the executive action which he said was “….late [in coming] and did not go far enough”.  He was less than complimentary of those Americans who oppose immigration reform based on their claims about those who have entered illegally. He noted, “…the vast majority of “Americans” including “founding fathers/colonists” entered the country illegally and committed and continue to commit mass acts of genocide”.

Enrique Valencia from Parent Leadership Action Network, which serves many East Oakland families, said, “The President’s executive action is good for families it benefits and is a testament to the grass roots activists’ work over the last couple of years. It is one step. The community needs to keep the pressure on the President, and Congress.”

Lest one think only Latinos are impacted by immigration issues,immigrants from other parts of the world weighed in.  Abel {last name not given] who operates a weekend vegetable stand at the Fruitvale Farmer’s Market is a legal immigrant from Vietnam.  She lives in Fresno. While she was happy to hear the news of the president’s action, she too felt it did not go far enough.  She has friends living in the U.S.  who will not be covered by the act despite the fact that they too work hard and are responsible citizens.

Professor Stan Oden, author of “From Blacks to Brown and Beyond: The Struggle for Progressive Politics in Oakland, California, 1966-2011” , said, “The executive action was long overdue and the undocumented people living here shouldn’t have to live here in fear of deportation.” He believes most Republicans refuse to recognize the humanity in the undocumented.

Jerod Brown demonstrated far more knowledge about the president’s action than the average American.   He pointed out  that contrary to popular opinion, what the president outlined was not a pathway to citizenship.  He wondered if the president had “…support from both the House and the Senate to pass substantial immigration reform”.  He has co-workers who will be affected both positively and negatively by last week’s decision.

Other East Oaklanders held varying opinions of what the president announced.  Don (no last name given) wondered about “security and whether criminals were entering the country.” He favored deporting those who commit crimes.  In a similar vein, an East Oaklander whose Twitter user name is “Ookiee” tweeted, “….people should not be rewarded for breaking the law. Simple.”.

Undoubtedly, the president’s use of his executive powers will continue to stir debate and tumult as the national debate around immigration reform continues.  More likely than not, the pathway to citizenship many seek will be part of new Congress’s  agenda in 2015.