A Ride through a Neighborhood 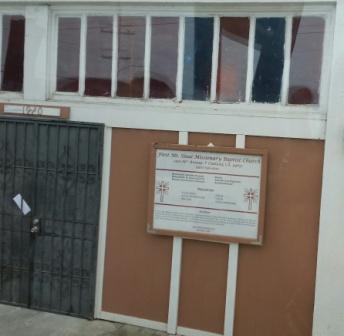 I could hear, “We’re tired of this,” echoing off the walls of First Mt. Sinai Missionary Baptist Church. Brenda Payton, Oakland Voices coordinator, told correspondents  from Sacramento and Oakland Voices how members from this seemingly small East Oakland Church walk the streets in their neighborhoods.  We took in the church’s smallness as we listened to the enormity of the task— Cease Fire—an effort to rid communities of gun violence, one block at a time

We witnessed East Oakland’s tranquility first hand on Saturday, March 14th. As we traveled through East Oakland, we saw people in their yards, walking the street and engaged in shopping. No signs of fear – just a community at peace. 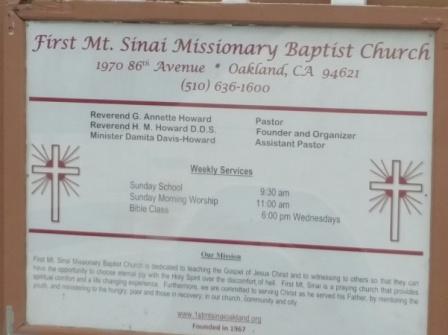 We visitors and the community benefited from the numerous hours walked by engaged parishioners and community residents  working with the Oakland Ceasefire program. The program is directed Ms. Reygan Harmon and serves predominately black and brown men actively engaged in shootings, ranging in age from their mid – 20s to 30s,  most of them lacking social and job skills.

Those echoes I heard faded away as we circled the petite church. They were replaced by car sounds and everyday sights of people enjoying their neighbor. I could almost hear them saying “thank-you” to those community volunteers who helped them reclaim their neighborhood.