On election night I found myself at the headquarters of Libby Schaaf’s election party. I call it a party because it felt like one. The alcohol was copious (and free) and the people many. All ages and backgrounds. “A good picture of Oakland, minus the hipsters.’ as my Oakland Voices colleague,  Tiffany Lacsado,  described the people present at this two-story former restaurant.

This election season I attended and covered two Latino Political forums in the Fruitvale, one for mayor and one for city council,  another Mayoral forum in East Oakland and a school board forum at an East Oakland Middle School. Seeing that I was so politically involved, my friends started asking what I thought about the candidates when election day came around.

They asked me things like who they should vote for and who I was going to vote for  to which I would respond the same thing I tell the people who kindly asked me if I had registered to vote: I am undocumented and I can’t vote.

But this isn’t about the fact that even though I’ve lived in this country for over 20 years and consider it home, my opinions and thoughts have no direct effect on the results of every election that I’ve witnessed since I turned 18. This is about the fact that through Oakland Voices, I discovered a way in which I could better inform people so that they can make better choices when they get to that voting booth, an activity I’ve only experienced through the descriptions of others. Being at the Schaaf headquarters on Election Night, and live tweeting the happenings definitely felt like I was part of the democratic process, if only as an observer. 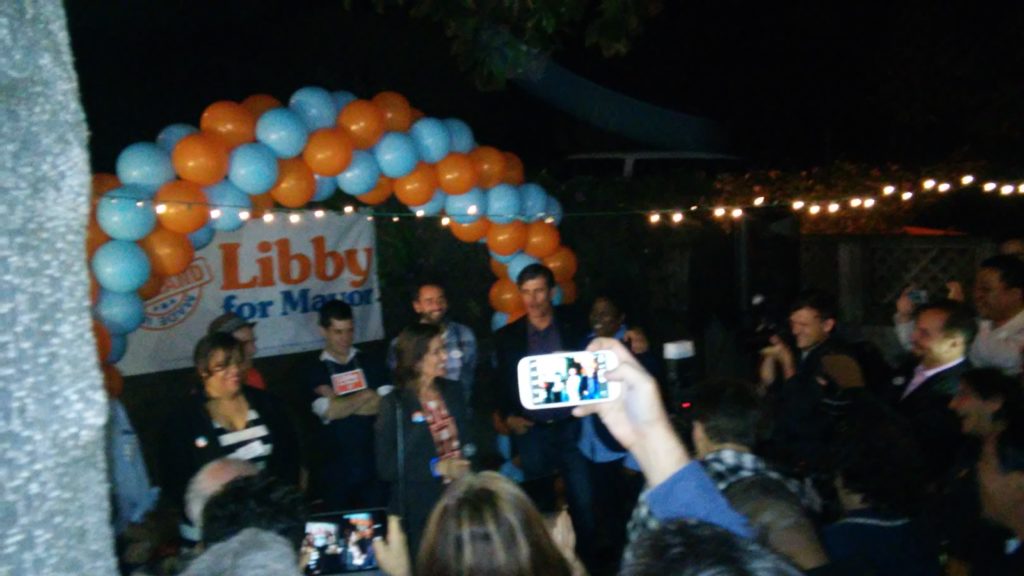 When the music stopped at 11 pm, Schaaf got on the stage to tell us that “Prosperity and growth have seemed to have happened all around us and somehow skipped [Oakland]. But doesn’t this feel like it is Oakland’s time finally? This is Oakland’s time. This is our chance to make our city as beautiful as it deserves to be–and I mean clean. With some roads that you don’t fall into and to take care of our children. We are not doing a good enough job making sure that our kids are succeeding and are set up for success.”

Whether or not Schaaf makes good on her promises, I believed her and I felt like I too had helped made Oakland better. My roommate voted for Schaaf and maybe it was because of my quick rundown of the candidate’s ideological stances, who knows. But the fact that I might have had an effect on her decision and that of others felt really great.

It was nice to experience one part of the democratic process. The waiting part, and the culmination and conclusion of the mayoral forums that show the ideologies of the candidates. Election night created schisms across the country, but in Oakland things ended in a hopeful tone. It was great to record the events of the night through Twitter, photos, videos and notes and to also discover ways in which I can make my shadowed voice be heard.

Erick Chavarria is a native of Mexico. He has been navigating Gringolandia ever since he moved to the U.S. at the age of five. He is very compassionate toward social issues and has been active in grassroots movements, particularly those aimed at Immigrant rights and Latino issues. He hopes to shift perspectives through his writing.

In one East Oakland neighborhood, school isn’t out for summer. Fifteen days after public education advocates started a sit-in on the nearly 100 year-old campus of Parker K-8 school, classes are back in session for […]