Being the first newspaper in the country to have an African-American editor, The Oakland Tribune carries a tradition of diversity. Today we see this tradition continued through the Oakland Voices program it started a few years ago. Oakland Voices is a community journalism project that seeks to report the rich stories that often go unnoticed in the negative narrative about East Oakland. The issues and successes we cover represent a point of view that is not often portrayed in the mainstream media, sparking conversations around the intersections of race, class, and sexuality across our communities. 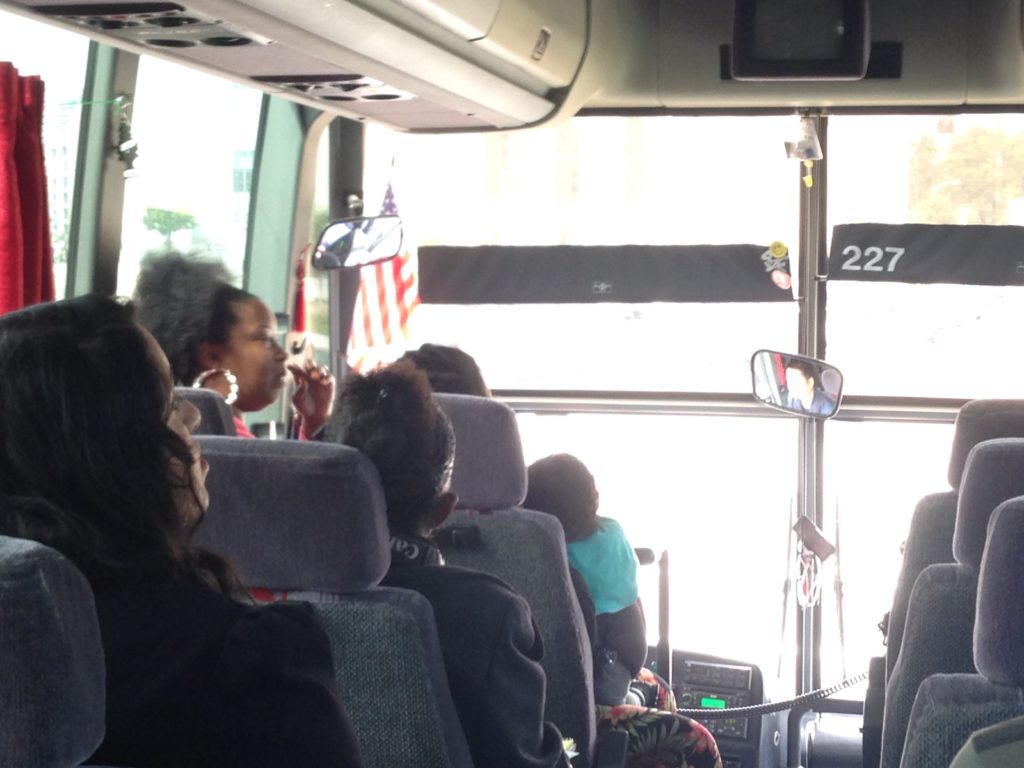 On the Saturday, March 14th both Sacramento and Oakland Voices 2014 cohorts came together to share these stories. We met at the Oakland Tribune and ascended unto a bus big enough to carry a High School Marching Band. We saw parts of Oakland that I often don’t get a chance to explore on my bike, my mode of transportation.

We heard about the history of buildings like St. Augustine’s Church, a historic building where the Black Panther Party kicked off  the first Free Breakfast Program for School Children that spread around the nation.

We discussed the tyrannical politics of Lionel Wilson, former Oakland Mayor and the first African American Mayor in the country. His years in office were marked by a plethora of controversial stories. “Did you know all of this?” I asked my fellow cohort, Sandra Muñiz, who was equally fascinated by the details.

We made a pit stop at the East Oakland Sports Center and toured the facilities to discover an array of affordable activities for the community, such as a fully -equipped gym, an array of dance classes and a fitness and aquatic center.

As we traveled down International Boulevard, a main artery of East Oakland, we all took our turns talking about our experiences with this Boulevard.

We talked about the history of gangs on International and Roze Castañeda from Sacramento Voices told us about similar stories in her community.  Castañeda talked about a hybridization of gang life.  As the children of former gang members navigate a society where they don’t find other people with the same violent childhood stories, she said they create “cliques” within themselves, continuing the tradition of segregation by gang association.

In East Oakland the gang conflicts started dissipating when the city of Oakland started implementing after-school programs that guided young men of color. Muñiz told us about the ways gangs used to control  certain blocks on International Boulevard, often shooting members of rival gangs if they were found on their turf or even people who simply failed to respect the traditions of the neighborhood–e.g. wearing the wrong colors.

The food havens of the Boulevard were also heavily discussed. Oakland Voices Sergio Martinez emphasized  culinary institutions like Tacos Sinaloa, Tacos el Grullense, Jalisco Restaurant, and Cam Huon that have been bringing communities together for years.
All in all the opportunity to interact and share our city with Sacramento Voices proved extremely educational for everyone.