The disproportionate number of Trans non-White women who have been killed was on the mind of Aubrey Mariko, 22, on February 24th as she published her last Facebook update, a photograph of her knee over the red railing of the Golden Gate Bridge and the Bay waters below with a caption that read, “Being Trans sucks!”

The night before she jumped off the bridge and took her life, Aubrey cited the recent Trans killings around the world and asked in a Facebook update if she was going to be next. 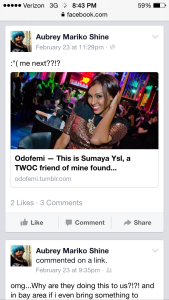 She wasn’t always so hopeless. In a description about herself on her website, http://ilove4life.me, Mariko wrote: “loving and sharing communities, especially locally, is my passion”

In December of last year, Aubrey was awarded a year-long fellowship with Youth Impact Hub Oakland, a pipeline program for low-income youth of color that seeks to address social and environmental issues by having participants start enterprises.

Aubrey had proposed a project called: Stop Stigma Radical Rally that sought to advocate for awareness on mental health struggles. She hoped that her proposal would “be the beginning of a radical battle and stance towards ending all sorts of discrimination and bullying…through our self-expressions we have the ability to change how society views us, and enabled with our minds, and spirits we are able to fight for change.”

“Aubrey was always raising awareness on Trans issues, talking about how Trans folks of color were so excluded from the lgbtq (White gay) community and the Trans White community itself,” said Jorge Hernandez, a friend of Aubrey’s. She was involved in several activist movements, including the opposition to changes in Oakland’s Nuisance Eviction Ordinance that added prostitution and pimping to the activities that would be cause for eviction.

“What hurts the most is this amazing person who had so much to offer feeling like they didn’t have any options left,” wrote Lisa Evans who knew Aubrey through Youth UpRising in Oakland. “If that’s the way someone who was as resourceful and knowledgeable about the non-profit community and its resources feels, what does that say about the rest, you know?”

Aubrey would take the 57 bus dressed in colorful clothing, her hair colored a bright blue. “She wasn’t afraid about the oppressive nouns used against her. She exposed herself to a lot of people in ways that we often repress out of fear.” said Hernandez.

Hernandez said Aubrey was in the foster care system for a large part of her life. She dealt with sexual molestations and rape. These are the kind of stories, the voices that are unheard when White people are the poster faces for social issues that affect People of Color to a larger degree.

The reality is clear, Transmisogyny and Transphobia falls heaviest on Trans women of color, according to a 2012 report from The National Coalition of Anti-Violence Programs. It found a three-year trend in which Transgender women, LGBTQ and HIV-affected People of Color experienced a greater risk of homicide than LGBTQ and HIV-affected White people.

Though Trans women of color experience greater levels of discrimination and violence, the public is more likely to hear the stories of White Trans women. Such is the case with Leelah Alcorn, a White Trans, middle- class 17- year- old whose suicide made international headlines and sparked many conversations about Trans issues.

Or the story in the New York Times about Sasha Fleishman,  a White, genderqueer (neither female nor male), middle- class 17-year- old who  suffered second and third degree burns on their legs after a teenage boy lit Fleishcman’s skirt on fire on the 57 bus in Oakland, the same bus Aubrey took to go home. The Times story reported that Fleishman arrived from the hospital to a “street crowded with reporters and photographers…cards, letters and packages poured in, including some from Canada. An online medical fund raised $31,000 in donations. Several high schools had sponsored skirt-wearing days; so did a local bookstore.”

Meanwhile Trans women of color in detention centers around the country continuously suffer sexual abuse and are often forced to choose between being in solitary confinement or being raped. Transgender women make up only one out of every 500 detainees in immigration detention facilities, yet  they are the victims in one out of every five substantiated cases of sexual assault, cites the Transgender Law Center.

Trans White violence is not any less appalling than violence against Trans women of color, but the fact that the media does not pay attention to Trans issues until they directly affect White people is problematic and undermines the struggles and needs of Transgender women of color. By having White Trans women represent the Trans community as a whole, the media fails to shed light on Trans women of color.  We don’t see the programs, research, policies and legislation necessary to procure their safety.

Aubrey’s tragic death is a powerful example. It was not reported in the local news media outlets or her hometown paper. According to the mainstream media, it’s almost as if she never existed.

My light skin and male cisgendered identity give me a privilege in this society that does not allow me to speak for Trans People of Color. Trans journalists from around the world at planettransgender.com have long spoken about this.

“A Transwoman is slain every 29 hours, yet we make up less than one percent of the world’s population. Transgendercide is taking place,” an article on the website reads. “Certain segments of society have declared war on us and we are dying at a rate that endangers the very existence of our community.”

Aubrey posted this article on her Facebook page the night before jumping off the Golden Gate Bridge.

She was laid to rest in power on Tuesday, March 3rd. Her legal guardians buried her as a boy using the “legal” name that was given to her at birth. Aubrey had the support of her friends and Trans community, all the resources the Bay provided for Trans youth, yet she didn’t have the privilege of unconditional parental love for the person she shined on to be.

Erick Chavarria is a native of Mexico. He has been navigating Gringolandia ever since he moved to the U.S. at the age of five. He is very compassionate toward social issues and has been active in grassroots movements, particularly those aimed at Immigrant rights and Latino issues. He hopes to shift perspectives through his writing.