Early on in the summer, I met mayoral candidate Joe Tuman, endorsed by the Oakland Tribune, at Love Our Lake Day. He spoke with me about after-school programs and the Oakland Police Department, and even gave me his number in case I wanted to ask him more questions later. It was a surprisingly kind gesture, one that stuck with me. When the Tribune asked us at Oakland Voices to cover the mayoral election, I offered to write from his headquarters at The Grand. It was bound to be an exciting evening.

At Tuman’s 6th floor party suite, just after the polls closed, about 15 people were seated around the television quietly chatting with one another, noshing from the cheese platters and sipping on homemade mint juleps. Tuman, a devoted marathoner, was intently relaxed, a posture one sees in endurance athletes before a big race. 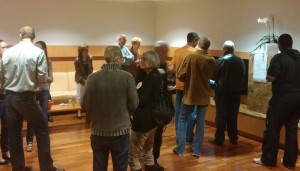 Supporters waiting for the results

Most people I spoke with were old friends and supporters, perhaps a tax bracket and age group higher than the average Oaklander. Towards the end of the first hour, students of Tuman’s from San Francisco State filtered in, along with his campaign manager and family members.

“He’s in third!” someone shouted. The room got chatty and the energy picked up.

As I took notes from a quiet corner, Tuman appeared and offered to give me an interview. Once again I was struck by his generosity with his time, especially on this important night. We talked a bit about the results, then I asked him what his biggest surprises were. He bit into a chocolate cookie and looked up, thinking. “Campaigning was a lot more effort this time. I’ve been at this for 16 months now. I thought I’d be able to spread it out over a longer period of time, but it just…” he made a gesture like a water level rising. “But I liked knocking on doors and just talking to people.” 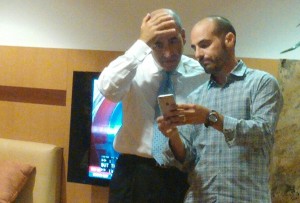 Joe Tuman reacts as the returns come in

As we spoke, his candor grew. “There are no friends in politics, only shifting alliances. You would think I would know that.” He was frustrated with endorsements that didn’t come through, funding processes, the difficulty of being a city hall outsider. 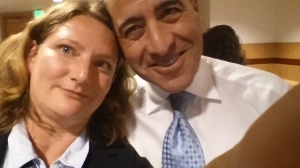 Me and candidate Joe Tuman

I thanked him and let him get back to the party. Around 9:30, he began what felt a bit like a concession speech to his supporters. It was a moment that existed outside of win or loss, punctuated with real gratitude for all those who helped him along the way. At 10 o’clock, most of us were on our way out the door. After getting a quick photo, we shook hands again, and it was all over.

The long campaign came to an end in a few hours.