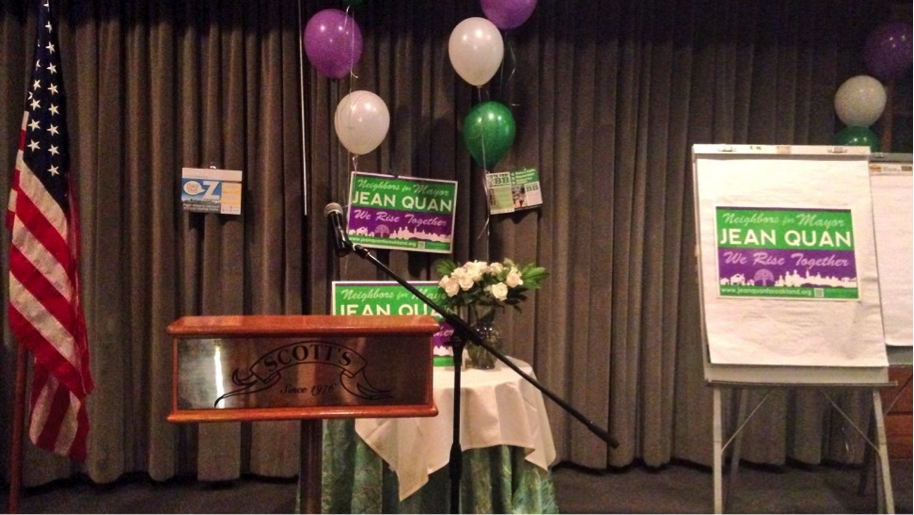 No confetti, no raucous crowds here, just a bluesy ambiance set by the live jazz playing in the background. The bluesy sentiment and folks talking work, life and family was a somewhat lackluster atmosphere for a multi-ethnic, very Oakland-esque crowd of 100 plus attendees and Quan supporters.

The highest point of Jean Quan’s election night party was when the Mayor walked in. The energy shot up as the crowd chanted “Foour more years.” It was reminiscent of the fans at the Oracle Arena who proudly and stubbornly chanted to bring the doomed Mark Jackson back. But when Quan took the podium, her fate as the mayor seemed clear. Oakland’s arguably most polarizing mayor, Oakland’s home-girl wasn’t coming back.

Quan fielded the usual tons of questions from the media, mostly questions about her thoughts on possibly losing. She referred to her track record. She staunchly stood by her accomplishments of creating a grassroots coalition of voters in Oakland – voters who have historically been unengaged and underrepresented – and carrying the city through difficult times. I expected this. I appreciated it. I appreciated Oakland’s first woman and Chinese -American mayor to stand by her tenure, albeit, arguably the most polarizing in Oakland’s recent history.

Her reverberating declaration: “I’ve been the best mayor in Oakland’s recent history”, caught me by surprise. For me it was the denouement of Quan’s tenure, her final refusal to be cast as a lame duck. 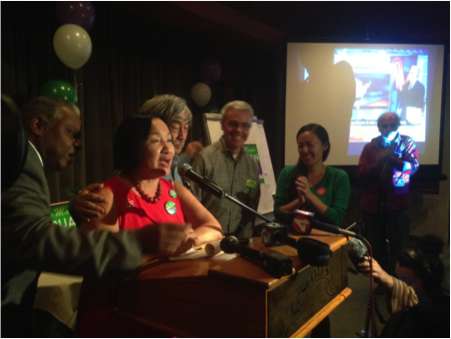 When reporters and supporters asked about the first round of voting results, Mayor Quan stated that it was “early”. The energy of the crowd began to fade, despite the smiles and inquisitive reporters. Quan’s spirited husband, Floyd Huen, stepped in, and did the usual thanks to the campaign team. And as Huen did the closing of curtains—thanking and telling supporters to go home and rest, my experience covering the 2014 Mayoral Elections, at least Mayor Quan’s election night, became anti-climatic.

The bluesy renditions came at an opportune time. It was barely 10 pm. I checked my email one last time before I decided to call covering the mayoral election a night. I saw an Oakland Voices colleague’s email on Libby Schaff’s election night party. Excited at the election results I assumed, Schaff exclaimed, “Does everyone understand how lucky I am to be made in Oakland?!” I chuckled to myself.

As the jazz subsided, and the crowd dissipated, I walked past former Assembly Member and Deputy Mayor Sandre Swanson who had this cool look on his face. We shook hands as I said, “Where’ve you been, and when are you running for Mayor?” He shook his head no, and said, “I’m running for senate.”