A sea of mostly empty circular tables adorned with white table cloth greeted me when I arrived at Scott’s Seafood Restaurant, Jean Quan’s campaign party location Tuesday night. Live music substituted for conversation before Quan’s spirited faithful trickled in to celebrate victory and slowly a medley of supporters’ voices began to compete with the musicians. Both electrified the once empty room. 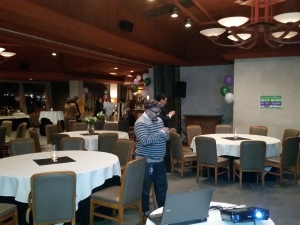 Families brought children, whose dangling feet swung  from their chairs, and it was great seeing young adults like Ramon Emanuel engaged in political dialogue.  This was Emanuel’s first political campaign and he said, “Working with the mayor on the campaign was a fun experience.” He went on to express a desire to become an Oakland police officer, because he believes Oakland needs more officers from local communities. I hope his dreams of serving Oakland aren’t lost, because he supported the wrong candidate. 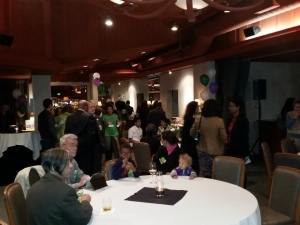 I spoke to Joyce Gordon of the Joyce Gordon Gallery and she said, “Quan was great. She gets things done.” A sentiment Merlin Edwards, another business owner echoed; however, he said that Quan’s  personality needs improvement.

Everyone  enjoyed the free flowing Mexican- style entrees and lemonade, while some purchased bar drinks to compliment their meal. The crowd’s  excitement grew to cheers when Quan arrived, dressed in red. TV reporters nudged out the print press for space close to the lady in red with their bright lights and microphones. Defeat wasn’t part of Quan’s lexicon that night. She highlighted in a speech about her outreach to the Latino Community and how her ground work would eventfully lead to the first Latino mayor. 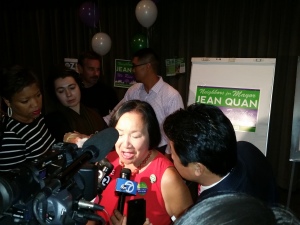 The big screen telecast mostly showed national election results of the republicans gobbling up the country like in an old pac-man game. A political romp,  which reminded me of Don Meredith’s Monday Night Football song he would sing, “Turn out the lights the party is over,” – a sure kiss of death.

Quan didn’t sing Don’s song Tuesday night. If she had, it would have sucked all hope from the room. Instead, the lady in red told everyone to wait until Thursday when all of the absentee ballots were counted. Unfortunately,  time and voters weren’t that kind to Quan.

The desire for instant gratification runs deep in youth culture; however, acquiring perseverance comes from enduring defeat. Let’s hope one of the lessons learned by the youth in Quan’s bid for reelection was: don’t quit. 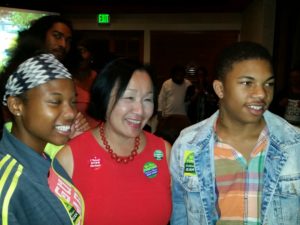 The mayor with two of her young supporters

I hope Meredith’s lyrics don’t represent Quan’s parting song. Hopefully, she prefers Sly Stone, “You can make it if you try,”  words our children can bank on, because they need all the encouragement we can give them. And if a picture is worth a thousand words, then Mayor Quan standing with two young community change agents is worth a farewell heartfelt song.