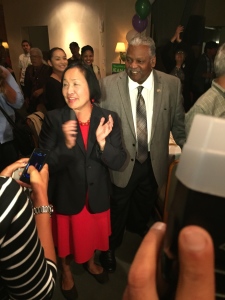 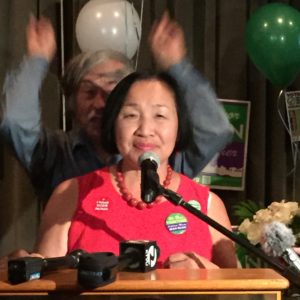 Mayor Jean Quan greeted by supporters (her husband, Floyd Huen, leading the crowd behind her)

I got my first election assignment under my belt. It was quite a unique and fun experience reporting for the Oakland Tribune.

I was assigned to Jean Quan’s campaign headquarters, which was located at Scott’s Seafood restaurant in Jack London Square. As I arrived I was not sure what to expect, especially when I saw five news vans and several cameramen standing around.

Polling places were closing in about 20 minutes when I entered Quan’s headquarters, but she was not there. As a matter of fact, there were only about 10 supporters on hand. As supporters trickled in, live jazz music serenaded the crowd. The free buffet kept a steady line of hungry supporters. At its peak, there were about 100 lively and festive supporters.

Of course the media had now surrounded her; bright camera lights were turned on and many bloggers and photographers were recording or taking pictures—arms and elbows hovered over my shoulders. I pushed in and also took several photos of Quan and supporters.

I had been asked to send “color feeds” and to capture quotes along with pictures. In the frenzy, I crouched down, typed up my quotes, linked my pictures and Tweeted, Instagrammed and even emailed my color feeds to the lead reporters. This was my first official live report. For the next two hours, I would take plenty of photos, capture lots of quotes,update my social media and e-mail the main reporters.

The next morning I would see my quote “Four more years” in Matt Artz’s article in the Oakland Tribune. It was exciting to read that “Oakland Voices Correspondents contributed to this story”, and for me, it was even more exciting to read my quote.

Overall it was a great experience. Proud to have been part of a city of Oakland specific event. 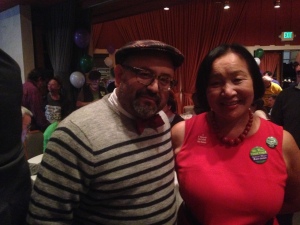 Me and Mayor Jean Quan on election night