It’s not often that I play tour guide in my hometown of Oakland. Usually when family or friends visit they want to see iconic places like the Golden Gate Bridge, Coit Tower and Fisherman’s Wharf, all which are across the bay in San Francisco. March 14,  our community journalist colleagues from Sacramento Voices drove over to Oakland to see what we feel is iconic, traditional and unique about Oakland. 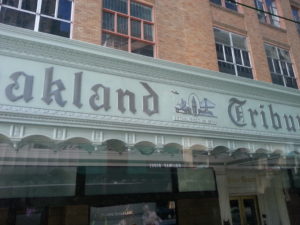 We started a the most iconic of buildings in Oakland, the Oakland Tribune Tower. As an Oaklander, I must admit it is my favorite building in Oakland. One can see this building from many different locations. I still have dreams of having a milestone birthday on the top floor (right above the Oakland Tribune letters). Martin Reynolds , senior editor at the Oakland Tribune, explained the history of the building. The Sacramento Voice correspondents seemed engaged and intrigued as they looked out the windows of the large bus chartered for our tour.This first stop set the tone.

We then made our way to the Lake Merritt and the farmer’s market that happens every Saturday in front of the Grand Lake Theater. Reynolds described the farmer’s market as a “microcosm of Oakland.” Ironically,  we saw a group of young Latina mariachi dressed women with musical instruments in hand, kids of all ethnicities playing and many vendors offering many different types of

Across from the Farmer’s Market is the old Kwik Way building and next door is the bar, Hearts and Daggers. What was most exciting about this tour,  my fellow Oakland Voices’ correspondents began to give oral histories of what use to be at these locations. For example, Hearts and Daggers used to be the old Serenader’s bar, which was African- American owned.

Next we moved on to deep East Oakland. We drove past recognizable places like the Oakland Coliseum and the East Oakland Sports Complex. As we drove, we had rich conversations about the Black Panthers, the Hells Angels motorcycle club, Felix Mitchell and the politics that have shaped some businesses in deep East Oakland.

The highlight of our tour was probably our drive down International Boulevard from 98th Avenue to 1st Avenue where International ends and Lake Merritt begins. Le’Ana Powell, Oakland Voice correspondent, said, “you can see African Americans, Latinos, Southeast Asian, Polynesians.”

As we drove down International, the correspondents learned of new restaurants like the Masala Cuisine restaurant on 79th Avenue and International which specializes in Indian food and the food truck that serves good tripe soup. We all agreed we should have pulled over and eaten at one of these spots.

As a person who grew up in Oakland and who frequently drives through these neighborhoods, it was nice to hear from my fellow Oakland correspondents and to learn rich histories of some of the establishments we drove past. More importantly, talking about and explaining the nuances of my town to my Sacramento colleagues reminded me of why I am so proud to be from Oakland. It felt good to hear, show and tell well- balanced personal stories of struggle, hope and optimism from my colleagues’ personal journeys and Oakland experiences.