‘Want to spend the rest of your life in prison?’: A Judge’s Advice & Some Murky Testimony 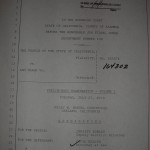 Because in the end, Lam chose to plead “no contest” to the charges against him, there was only a preliminary hearing, which took place almost exactly a year after the original incident, which was the night of July 31-August 1, 2009.

The entire preliminary hearing lasted four days, concluding on July 31st, 2010. The purpose of the preliminary hearing is to establish whether or not there is enough evidence to go to trial. Both the defendant and “the People” have a chance to call witnesses and present other evidence.

The court transcript runs to 390 pages. Much of it is like reading a play, with characters for whom one may feel more or less sympathy, or find themselves believing or not, including the judge, counsel and witnesses.  Having never read a court transcript before, nor having attended a trial or hearing in any capacity, I was somewhat surprised at the proceedings. A great deal of profanity was included, and there were a lot of contradiction on the part of the witnesses. I was also surprised at how often the judge addressed Lam directly, although Lam himself did not testify during this preliminary hearing.

Much of the transcript is also very repetitive and tedious.  There was a great deal of focus on the text messages sent from one of the witnesses – a 16-year old girl I’ll call J – who was in the rear seat of the car along with the victim. The messages were written in what I think of as text lingo – for example, “Man brah I swear ama go bad on dees of chap bustah ass” – and were a bit hard to decipher.

There was extensive examination and cross-examination about the texts, and what some of them meant. The initial texts sent to someone who was not present said that another boy, S, had shot them. But during testimony, J. said that she meant to write Lam, not S, although she texted that it was S. on two separate occasions that night. At the very least, that would seem to raise a lot of questions.

There had been 4 people in the car – the driver (who was a teen-aged boy), and three teen girls, one of whom, Alicia, was eventually injured. J and both of the other girls, including the victim, were called as witnesses, but the boy was not. One of the local neighbors testified for the defense that she had seen three African American teens running away from the scene, but there was no corroboration of this by any other witness. Also, according to the Lam’s lawyer, although he found her to be a credible witness, her testimony was treated dismissively by the judge.

As I was reading the transcript, I tried piece together exactly what had happened that evening, particularly the events that led up to the shooting. This much seems not to be in dispute: the victim and her friends attended a “college party” in  East Oakland that they learned about from the victim’s sister. They arrived that night, and left around midnight. They were driving around East 16th and 35th Avenue. That’s where they saw and were seen by Lam, and several others.

At some point, around midnight, there were several shots fired into the car through the rear window, from the direction where Lam and the others were standing. One of those bullets hit Alicia in the head.

When J realized Alicia had been shot, they found a nearby cop, who called the paramedics. Alicia was taken to the hospital, while the others were put into separate police cars, questioned at the scene and also at the police station. Although Lam was identified as the possible shooter, he was not arrested until nearly three months later, at his home, on October 22,  2009, and has been in custody ever since.

Beyond that, there is a lot of back-story about who attended funerals of recently killed gang members, rivalries among various gangs such as Border Brothers, Norteños and Sureños, and so-called “turf hoppers,” or “leyvas” – those who associate with people from both gangs, and the testimony given at the station to the police investigator. I was surprised to read how often the witnesses recanted or contradicted their police station testimony, and claimed not to recognize their own signatures or recall their own statements. One witness initially refused to appear, was eventually arrested, and had to be brought in from Santa Rita Jail.

Of everything I read in the public documents available at the Alameda County Courthouse, I was most astonished by the judge having spoken directly to Lam, and by what was said in a persuasive attempt to convince Lam to take a plea deal of 25 years.

“The summary of the evidence, I do think, is powerful,” the judge said directly to Lam. “There seems to be quite a bit of evidence against you. They have a very persuasive case.  It seems to me if you’re willing to take 20 years, you should be willing to take 25 years, when it means you will get out of prison. It’s a definite period of time.  You could still see your family, you could still see your friends. You could still get married, have children, still live a life.”

“You’re only 19 or so,” the judge continued. “I’m sure it’s difficult to conceive or imagine that many years in custody. But I think that leads some people to go to trial and after they get a sentence with life, then think, ‘what did I do? I’m here for the rest of my life, most likely.’ There’s not a huge difference, I don’t see, between 20 years and 25 years, when it means you get out. You can have a life.  And quite frankly, for a fleeting moment, I thought, ‘Oh you want a trial? You want to spend the rest of your life in prison?’’’

I actually was not aware that the judge would or could speak directly to a defendant, nor pressure him to take a plea deal rather than a trial. Lam’s lawyer told me it was unusual, but not strictly prohibited. Apparently, it had a profound effect on Lam, and he chose the guaranteed 25 years, of which he would serve at least 85%.

In reading this, I had to remind myself that I am not re-trying the case, or attempting to assign guilt or blame. The case is a completely settled matter as far as the State of California is concerned. There can be no appeal with a plea deal. And Lam, whether or not the solely responsible party, is now three years into serving his 25 years. I was able to visit him in prison and ask him his side of the story.

Before taking that long trip out to see him, I had an opportunity to speak with the victim and her mother.

Next: Alicia’s Story, Part I