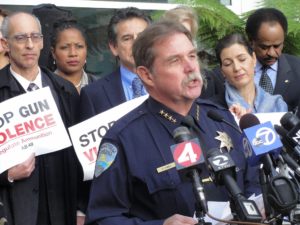 After a year with 131 murders in Oakland – not the city’s highest ever, but the most since 2005 – and after the massacre in Sandy Hook took 26 lives, mostly children, we started 2013 off with another teen killed in a crossfire in East Oakland.

What I want to highlight here is that she wasn’t a target, but collateral damage, due to the frequent use of guns to settle arguments, guns with large ammo magazines.

February 1st’s shootings after Art Murmur, probably caused by an argument or bad drug deal, killed one and injured three, including 2 women walking nearby.

On January 11th, Oakland experienced 4 gang-related shooting deaths on a single day. Oakland police confiscated several weapons with high capacity ammo magazines.  One of those magazines could hold up to 100 bullets.

We certainly have far too many guns in the hands of our youth. But it’s also true that the nature of these weapons have changed over the last few decades. These aren’t your father’s Saturday Night Specials. Many guns have become militarized – they have huge ammo magazines, they fire quickly, and some are capable of piercing what were bullet-proof vests used by police and federal agents.

I’m a bit old-school here. I remember Jimmy Cliff brandishing a 6-shooter in the 1972 Jamaican gangster film The Harder They Come. In those days, even semi-automatic pistols carried 7, 8, sometimes 9 shots. That meant there wasn’t a great advantage in using these military-style guns in gun fights. Not then.

If you were in a gun battle in those days, theoretically, with a revolver, you might save a bullet or two so you didn’t have to reload. Fewer shots meant less collateral damage.

But today, Glocks and Berettas can carry 20, 30 and sometimes more shots. These are the guns of choice on the streets of Oakland.  That makes them potential assault weapons and in the terrible mass-shootings of the last 12 years, these weapons have been involved more and more nationally and more even here in Oakland.

I had not realized how high the ammo capacity had grown for the now common hand guns until I caught a documentary on “America’s Favorite Handgun: the Glock,” and heard that Glocks usually have ammo clips of 20 and 30 bullets. That was only a few weeks after a friend had been caught in a cross fire between 2 cars going down MacArthur Blvd between 82nd and 73rd Ave.  My friend said, “they just kept shooting,” and estimated 30 or more shots were fired.

OPD Sgt. Christopher Bolton, the staff aide to Chief  Jordon, added to this theme by explaining, “the Oakland Police Department has seized an increased amount of high-capacity magazines for use in both pistols and rifles. It appears that these magazines are more prevalently carried or used in crimes on the streets of Oakland. A search of all incident reports containing the key word string of ‘high capacity magazine’ revealed an average of 60 offenses per year in the last three years. From  2007 through 2009, the average is 22 annually.”

One way to read that is that the rate at which weapons with high capacity magazines are used in Oakland crimes has almost tripled in the last few years.

Speaking to the experience of OPD crime lab technicians, Bolton added, “they have been seeing more extended mags for pistols and most of the rifles recovered that we examine have high cap mags, usually 30-40 rounds, but [we]  have seen capacity of up to 100 [rounds]. ”
Indeed, the infamous 2011 killing of 4 police officers storming an East Oakland apartment was based on an AK-47 assault rifle with 30 shot magazines.

The assault weapons ban used to limit magazines for semi-automatic weapons to 10 bullets. After Sandy Hook, that sounds like a reasonable limit. And I am happy that many legislators are considering reviving and strengthening those limits. California Senator Dianne Feinstein seems to have taken the lead on this in Washington.

Closer to home, East Bay State Assembly Members Nancy Skinner and Bob Bonta have introduced AB 48 which attempts to regulate and register ammo sales, which are not currently reported, and ban the sale of conversion kits that add more bullet-carrying capacity to existing ammo magazines.

According to Rep. Nancy Skinner, “It is easier to buy ammo than to buy cigarettes.” I think that should be tightened-up and I think the many mothers and fathers who have lost children to senseless gun violence would agree.

While I have been a long-time advocate of gun-control and would personally approve of serious legislation to restrict access to these lethal weapons, I recognize the effectiveness of the NRA and the gun industry in arguing for the constitutional freedom to carry weapons. They will resist most efforts to restrict access to guns, even the military-style semi-automatic assault rifles like the AR-15 Bushmaster used to kill those 26 people in Connecticut.

Do ordinary civilians need ammo clips of 100 bullets? Do hunters need more than 10 shots to down a deer?  Apparently some companies in the gun industry believe 100 round clips should be standard. Here’s a link to a review of 60 and 100 bullet magazines for AR-15 semi-automatic rifles. I find it very hard to believe that hunters actually need these military type magazines.

But I think even dyed-in-the wool NRA members – those sometimes called “gundamentalists” – would have difficulty explaining why common citizens need to carry ammo magazines of 30 or more shots. Does everyone need to be in a Hollywood-style shoot-out?  I really hope not.

In the  Tucson, AZ shootings 2 years ago in which 6 people were killed and 12 injured, including US Representative Gabrielle Giffords, the shooter, Jared Lee Loughner, used a Glock 19 with a 33-round magazine.  That weapon is currently legal and available in most states. It was also the weapon also used by Seung-Hui Cho, who killed 32 people on the Virginia Tech campus,  in 2007.

Captain James of the Emeryville Police, who spoke at the Oakland press conference in support of AB 48, later told me that large ammo clips led to rapid fire even by seasoned police officers. He described this as a kind of adrenaline-induced  “tunnel vision” where officers often loose track of the number of shots they fire. He said that when the standard police weapon was a revolver, officers would report firing 2-4 shots but would actually fire 5 or 6 shots, generally emptying the revolver. Nowadays, Emeryville police carry semi-automatic pistols with 15 round magazines and they often report firing only 5 or 6 shots when they actually fire 10 or more shots, sometimes emptying the 15 round clip.

Captain James thought teens and tweeners in gun battles would be less restrained than police officers and that was leading to more shooting wounds and deaths, especially among the non-combatants. If you fire a lot more bullets, he reasoned, you are likely to hit more people, including unintended victims.

We are seeing a few more mass shootings in America, especially in recent years, but the number of victims has increased. And this is because weapons with large ammo capacities are now legal and easily available.

According to Tom Diaz, the senior analyst for the Violence Policy Center (VPC) in Washington, who was a guest on the NPR program “Fresh Air,”  with improvements in gun technology since the 1980s, hand guns now have assault weapon features such as rapid fire and large magazines. Some, such as the FNH Five.Seven 5.7 mm pistol, can use armor-piecing ammo and are preferred by drug cartels and terrorist groups.

VPC’s Legislative Director Kristen Rand said, “High-capacity ammunition magazines facilitate mass shootings by giving attackers the ability to fire numerous rounds without reloading. An effective ban on high-capacity magazines will help prevent tragedies” in the future like those in Arizona, Colorado, and Connecticut. 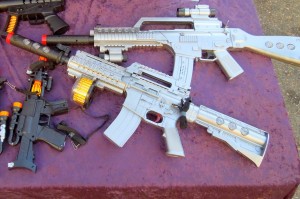 As I write this, in New York State senators just voted for the NY SAFE Act of 2013 which tightens restrictions on reselling guns and creates a registry for assault-style weapons, plus restricts ammo magazines to 7 bullets, from the current NY limit of 10. Our state’s proposed AB 48 only seeks to implement the prior federal limit of 10 bullets in a clip.

And earlier this month, former president Bill Clinton told Associated Press “I grew up in this hunting culture, but this is nuts.  Why does anybody need a … 30-round clip for a gun?”

Oakland is awash with guns. I say register all ammo sales to find out who’s stockpiling it. I say  limit ammo capacity of these guns to limit their lethality and to prevent more tragedies like Aurora, Col., and Newtown, Conn. We already have had one mass shooting in Oakland.  Let’s prevent any more.

I say, “Let’s clip the clip!” Ten shots should be enough to down a deer or kill an adversary. Let’s reduce collateral damage on our streets and prevent a future ‘Baby Hiram’ shooting from happening.