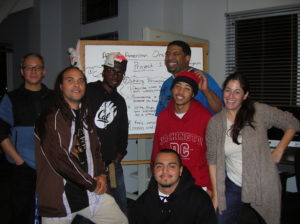 Zusman is a storyteller and oral historian. She created Story Bridges to help people tell their stories. She was particularly inspired by her work with elders in senior living facilities, where she found some seniors who were interested in stories as ways to create legacies. “It was a good place to look for prospective storytellers. Some people are very interested in telling their stories, some not. But it’s very impactful for everyone. I started noticing that people would have massive breakthroughs right in front of my face, and it was hugely transformational.”

Zusman describes storytelling as a path to community health. “When we are able to voice our truth and truly listen to one another; we see similarities where we once saw only differences, and in many cases, we can learn to respect each other. Our central focus is about health and healing.”

One of Story Bridges’ projects with the Oakland Unified School District is the African American Oral History Project at Edna Brewer Middle School.  African American high school students are trained there in oral history methodology. They learn interviewing skills and camera work. Because the students often go out into their communities to collect stories, they also learn how to present themselves in professional ways.

A major focus is interviewing their middle school students at Edna Brewer Middle School. African American elementary school boys are asked a series of questions about what their lives are like, how they perceive themselves, and how they think they are perceived by others. “Some kids have to worry about how they walk down the street,” Zusman notes, and even “what they are wearing.”

Casey Briseno, 18, is a senior at Ralph J. Bunche H.S., and a Story Bridges intern. He has been interviewing 4th and 5th  grade African American boys at Parker Elementary, asking them about growing up in Oakland.  He says many of them see Oakland as a “bad place,” because of drive-by shootings and drug dealing. But some will also say this city is a “good place, if they were born and raised here, they have their family and their culture.”

“These interviews have changed my thinking (that) this upcoming generation would be worse than us,”  Casey explains, saying he loves his Story Bridges project and the young people he’s working with. “They’re smart. Their eyes are open to what’s going on in Oakland.”

Another Story Bridges intern, 18 year-old Eric Nobles, describes Story Bridges as, “a very chill environment, learning to interview people, law agents, kids, people in the streets, people in Oakland. The Oakland Tech senior feels he has gotten a lot out of his internship. “I’m more aware of Oakland, the people, their thoughts about the community.”

Story Bridges also helps its interns develop their social skills. Dewey High School senior Sean, 17, has been with the program since last spring. “This has helped me to overcome shyness. I’m more comfortable talking to strangers.”

Although he was born and raised in Oakland, after interviewing younger students, Sean is not sure he will continue living here when he has children of his own. “It’s too violent,” he explains, pointing to the black-on-black crime that especially bothers him. “I don’t want (my children) growing up having such a negative perception.”

For Zusman, it’s important for people to understand that young people do care, regardless of what we may make of their academic performances. She says they have demonstrated wisdom, curiosity and awareness, and an eagerness to contribute to the larger stories about our society. Story Bridges aims to bring that energy and interest to light.

You can learn more about Story Bridges’ mission, services and programs at www.storybridges.org.