Going to Prison, Part I

I drove down to visit Lam in the Kern Valley State Prison (KVSP)  the weekend of December 7ththrough December 10th. I checked in by phone and email with the Public Information Officer, Lt. Jeff Smith, to help plan my visit. I learned what I could bring into the prison with me during my visit: almost nothing except my identification and a plastic bag filled with quarters, if I wanted to treat Lam (or myself) to any of the vending machine foodstuff available in the visitation area.

I thought it might have been a nice gesture to bring some cookies, or perhaps a book or other small gift, but I learned that I could absolutely bring nothing in with me other than the quarters and identification. 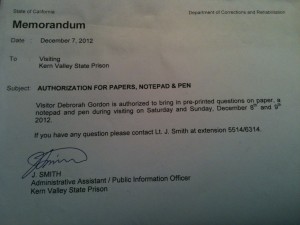 Special dispensation was necessary for me to bring in a pen and a pad of paper.
Photo: Debora Gordon, Oakland Voices

Lt. Smith said he would write me a note allowing me to also bring in a pen and pad of paper. My request to bring in a laptop computer, cell phone, voice recorder and/or camera were denied.

Although 250 miles away, getting to the town of Delano – about 25 miles north of Bakersfield, off Route 99 – was a breeze. I had an appointment with Lt. Smith at 3:00 p.m. and arrived with time to spare.

Lt. Smith explained to me how the prison population is organized. Prisoners are housed, in part, by the type of offense: Level 1  and 2 Offenses are crimes such as DUIs, drug offenses and petty theft, and are not housed at KVSP.

Level 3 and 4 Offenses are more serious crimes, such as rape, assault, murder and kidnapping. I asked why Lam was incarcerated at KVSP instead of San Quentin, which is much closer to Alameda County, and I was told that San Quentin is overcrowded, and many of those serving very long sentences will be sent elsewhere.

Where they are housed within their section depends on the type of crime, as well as the inmates’ education and work history. Lam was housed in an area of the prison known as the Sensitive Needs Yard (SNY), which can include inmates who need special protection from other inmates, such as child molesters, those who have committed non-violent crimes and those who might be unable to survive in the general population, particularly if they are not in gangs. There are many gangs within the prison walls, including the Aryan Brotherhood, the Black Gorilla Family, the Mexican Mafia, Nuestra Familia, and the Nazi Lowriders.

About 70% are high school dropouts, about 30% have high school diplomas and about 5% have college degrees. Most also came from low socio-economic backgrounds, many whose families were below the poverty line. Inmates are from 18 to 80 years old, with an average age of 36.

They are also classified according to the types of privileges they have, such as access to the yard to exercise, the day room to watch TV, access to classes, and being permitted to have a job (for which they are paid eight cents an hour). Lam has an A1A classification, which is the best work and privilege group.

Services offered by the prison are classes in Adult Basic Education – which is equivalent to instruction at grades k-8 – and Adult Secondary Education, for high school classes. College classes are available through correspondence courses. 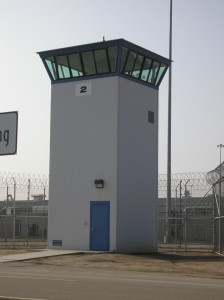 Inmates also have the opportunity to learn welding, engine repair, and office skills, assuming that they have the proper classification. There are also several mental health programs such as Alcoholics Anonymous, Narcotics Anonymous, and clinical case management.

Lt. Smith also explained the “multiple layers of secured perimeters” of the facility, including watchtowers, and multiple electrified fences with barbed wire.  Escape would appear to be impossible, although there was an attempt while I was there.

Next: Going to Prison, Part II: Getting Inside, the Visitation Room, Escape Attempt and Lockdown