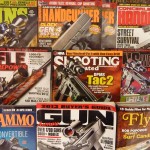 On a recent visit to the Walmart store in the heart of East Oakland, I discovered that the world’s largest retailer carries tons of magazines about guns.

Tactical arms. Shotguns. Concealed pistols. You name the type of gun, and East Oakland’s Walmart has a magazine that’s devoted to it.

I wasn’t looking for gun magazines, or any magazines at all, really. I stumbled upon the magazine aisle while searching for HP printer ink. The fact that the Walmart store even had a magazine aisle was a little surprising. To me, at least. It was a pretty extensive one, too, with a seven-foot high double-decker rack taking up the entire length of the roughly 30-foot aisle. 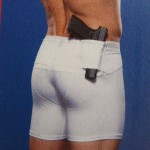 Gunderwear! The shorts holster – a great place for packing all your heat. (Concealed Carry)

One of the magazines, Concealed Carry Handguns, featured an ad for special underwear in which you can holster your concealed Glock, Beretta, Sig Sauer or Colt. The buff, Caucasian underwear model was pictured in several poses, including one from the rear, with his black metal tool nestled on his right hip, stuck in the waistband holster of  his tight-fitting white briefs.

There’s also an ad depicting a white woman wearing a thin, orchid-colored dress that a gust of wind has blown up to reveal a gun secreted in the garter of her sheer, thigh-high black nylons. Sex and guns. There seems to be a connection.

Another photo in Concealed Carry shows a white man aiming his gun at a poster depicting a Black man in a knit skull cap, who’s menacingly pointing a gun at the viewer. The photo accompanies an article about snub-nosed revolvers and their efficacy in close-range shooting scenarios, or “’bad breath distance’ gunfighting.”

Or, maybe not. I drove down 880 South to the San Leandro Walmart, just two exits past Oakland’s. They too had an extensive magazine selection. But they had about half as many gun magazines as the East Oakland store.

What about gun magazines in stores other than Walmart? Bookstores are a dying breed so there aren’t many to choose from. But I visited Fog City News in San Francisco’s financial district to check their inventory.

Fog City News is devoted to magazines, and stocks a vast array of titles, from art to almost X-rated. On its website, Fog City claims to carry the largest stock of magazines in the Bay Area, addressing subjects of every description. At first I thought they didn’t carry gun magazines. They were so well hidden on the top shelf of a rack that you wouldn’t even notice them. 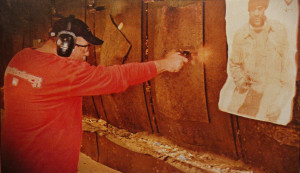 Solmi, 18, a Fog City employee got up on a step ladder to point out the gun magazines. There were seven of them. Who decides which ones to carry? “We all decide,” Solmi said, referring to herself, her coworkers, and the store’s owner. But the decisions stem from customer requests, she told me.

I contacted Walmart’s media relations office and asked them to tell me how gun magazine decisions are made in Oakland and at other locations. It’s been more than a week, but Walmart has not yet responded to my request for information.

One thing’s for sure, though. Guns are big business at Walmart. It’s the largest seller of shotguns and ammo in the United States, wrote Eric Lichtblau in an April New York Times article. Lichtblau also reported that a Walmart executive was the co-leader of the criminal justice committee of a conservative group that supported stronger self-defense laws in shooting incidents. That group, the American Legislative Exchange Council, successfully advocated “Stand Your Ground” laws. 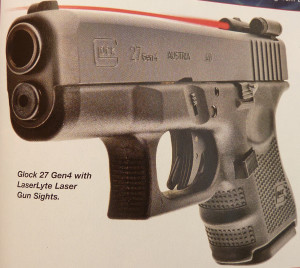 Walmart withdrew its support for ALEC after the tragic Trayvon Martin shooting, in which the gunman, who is accused of murder, claimed the “stand-your-ground defense” in shooting the unarmed Black teenager. In leaving, according to Reuters, Walmart cited “concerns about ALEC’s decision to weigh in on issues that stray from its core mission.”

Oakland’s Walmart does not sell guns. But it will help you make an informed choice when you decide to get one. Operating in a city that is notorious for its shootings, that’s a sound business strategy.