This ongoing series explores the unusually diverse racial terrain of the eastside of Oakland, California. It asks members of East Oakland’s varied racial groups why they chose to live there, where they came from, where they’re going, how they see their own race, and what are their experiences with members of other races. 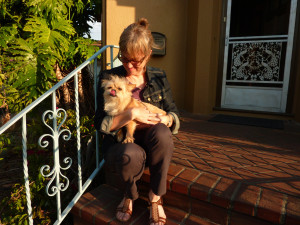 If you were to play a word association game and “East Oakland?” was the question, “white people” probably would not be the answer. Maybe your first association with “East Oakland” would be “crime,” based on all the news reporting that seems to focus on that aspect of what’s happening in that area. And when you think of “crime” in Oakland, you may not conditioned to think of crimes committed by white people.

In the Bay Area’s collective consciousness about East Oakland, white people might not even exist. Yet, according to US census website, “white persons” make up 34.5% of Oakland’s population, while “black persons” total just 28%. Of course, those percentages vary from district to district, but it’s certainly not at all unusual to see a white person in any part of Oakland, east or otherwise.

Dena Proctor — a 51-year-old white woman of English and Irish ancestry who laughingly referred to herself as a WASP (White Anglo-Saxon Protestant) — has lived in East Oakland for the past nine years. She moved there from Berkeley to live with her partner when he bought his first home there in 2003.Proctor lives in a modest single family house on the crest of a foothill in the Maxwell Park district, which is centrally located in East Oakland.

“It’s not slick – there’s an un-slick element,” Proctor said of her neighborhood. “But I really quite like it.” It has its problems, like the guy who apparently operates as an unlicensed car dealer and keeps at least four junky vehicles parked around her house at any given time.

And serious crime has hit close to home, including a home burglary across the street from her house. A woman was robbed at gunpoint down the street as she was coming home from work.

It helps that the neighborhood has a strong community group, Proctor said, although she doesn’t participate in it. She said she has a “waving relationship” with most of her neighbors. Since getting a dog a few years ago, she’s befriended an Italian-American woman in the neighborhood who runs a dog daycare business, and she’s gotten to know other dog owners in the neighborhood.

Does Proctor ever experience any racial hostility? “Kind of, yeah,” she admitted, “but not in any direct way.” There was a road rage incident on MacArthur when a black motorist called her a “white bitch.” But in those situations, people will just pick out any identifiable characteristic to hurl a cheap insult at you, she said.

Intellectually, she knows that too much can be read into appearances, but a young black male strolling through the neighborhood, wearing dreads and his pants cinched at the groin, will put her on alert.

Proctor does have black friends, and in fact her partner is black. She’s also friendly with the interracial couple (black and Asian-American) across the street. And she frequently talks to an elderly African American woman in the neighborhood who slowly makes it up the street with her walker every day, looking to get a little air and a break from her dialysis. 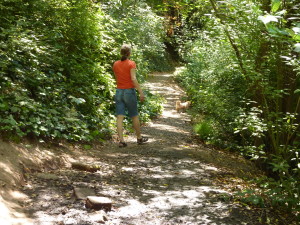 What about gentrification? “If  gentrification means people getting shot while driving in the neighborhood,” Proctor dryly retorted, referencing a shooting that occurred about a week ago, a couple of blocks away from her home. “We haven’t seen any gentrification or any big changes since the market bottomed out,” she said. “One black family moved in the neighborhood within the past year. And even when things were looking up, High Street” ‑ a major artery bordering the Maxwell Park district ‑ “didn’t look any better.”

One of the worst things that happened to Dena in Maxwell Park involved a car accident. It was a hit and run, in which a guy in a beat-up Cadillac sideswiped her Toyota Corolla. Proctor followed the dreadlocked driver and found him few a blocks away, assessing the damage to his car.

She got out of her car and asked him, “What were you thinking? I suppose you don’t have any insurance.” He said, “Yeah, let me just go to my car and get some information.” He went back to his car, jumped in, and took off, she said. Realizing “how stupid it was to chase him,” Proctor got back into her car and went home. 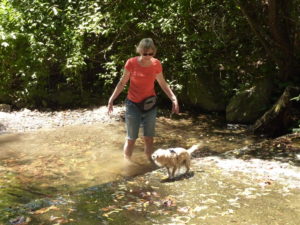 One of Proctor’s favorite places in East Oakland is Sausal Creek Trail near Fruitvale Avenue in Oakland’s Dimond district. She often takes her dog, Kate, there and they disappear into a lush, storybook forest that no one would believe is in the middle of a concrete jungle.

Another much-loved spot is the Mills College pool, which makes aquatics programs available to the local community. Other little gems are the La Farine bakery on Fruitvale and the Peets coffee shop, just a couple of doors down from the bakery.

The best thing about East Oakland? “Just having a home, your own space,” Proctor said. “It’s an affordable neighborhood where, overall, the good outweighs the bad.”