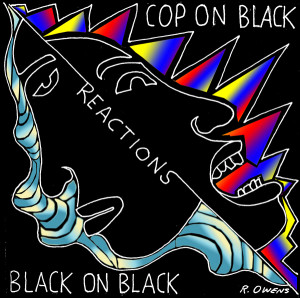 Hundreds of people showed up two and half weeks ago for a rally at Oakland’s City Hall, protesting the police brutality and racial profiling that they said resulted in the shooting death of Alan Blueford, who was an 18-year-old high school student.

There was no rally for Hector Matias, an 18-year-old restaurant worker who was Oakland’s 108th homicide victim of 2012. Or for Wilbur Bartley, the city’s 107th victim who was shot dead inside his cell phone store after being robbed. They were not shot by police.

Hector and Wilbur were the victims of thug brutality, not police brutality. They weren’t killed because of racial profiling by police. Nobody organizes a rally to protest thug brutality.

It seems that if you’re not killed by a cop, you’re a just a garden variety homicide victim. People don’t get too upset. You might get an impromptu curbside memorial, with shiny helium-filled balloons in various shapes and sizes. You might get veladoras – those candles adorned with religious figures. And empty beer, wine and liquor bottles, with their contents poured out in commemoration. And RIP signs on cards or spray painted on buildings.

The typical, garden variety homicide victim in Oakland will get a mention in the local newspaper. If the homicide victim was a noteworthy person in the eyes of the journalist – say a business owner or an athlete of some sort – the article reporting his death might be longer than the usual 80 or so words.

The local TV news might mention the killing in passing. The well-dressed, impeccably coiffed anchor might say, “A man was found fatally shot inEast Oakland today, near 73rd and Bancroft. It was the city’s 110th homicide this year. Last year at this time, there were 109 homicides.”

Then the newsreader will move on to the next story, unless a reporter happened to encounter any relatives or friends or neighbors of the victim at the scene. In that case, there will be close-up shots of the  distraught acquaintances, expressing their horror and disbelief, and exclaiming that it was so wrong and so unexpected that something like this happened.

And then, the victim of the day will be forgotten until the next man, woman, or child gets shot and killed. Most likely the next dead body will be that of a young black man, shot and killed by another young black man. And, most likely, the killer will get away with murder, given the Oakland Police Department’s low rate of success in solving crimes, as evidenced by the annual report of the OPD’s criminal investigation division.

People seem to get up in arms only if a cop does the killing, à la Oscar Grant or Alan Blueford. If it’s black on black, it’s business as usual. But if it’s cop on black – oh, damn, it’s on! Now we’re going to get mad and go out in mass numbers and protest with fists in the air, waving slick, screen-printed protest signs.

It’s like using the N-word. It’s OK to use that racist term if you’re black, but if somebody from some other race dares to use it, there’s going to be a federal case made out of it. And all the while, rappers and their (white) record companies profit from the sales of N-word-powered product that would be condemned as racist if anyone but black artists were making it.

That’s the problem. It’s OK for black people to be racist toward each other. It’s OK to profiteer in self-hate. But as long as the self-hate goes on, the “garden variety” killings will grow. There will be no en masse protests, unless somebody other than the usual suspect does the killing.