White-On-White Crime Makes Lots of Noise, Even if You’ve Never Heard of It 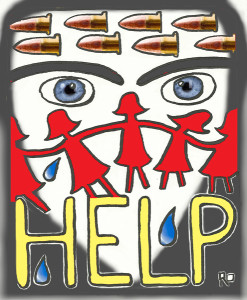 Mass murders get some people all stirred up. TV news shows become obsessed and devote all their attention to the homicides and to peoples’ reactions to them. You go to work or to the supermarket and that’s all people are talking about. The President of the United States even breaks into national television programming to deliver a speech decrying violence and the use of guns to shoot innocent victims.

You rarely see such a horrified national reaction to the “day-to-day” murders that happen in places like Oakland and Chicago and Detroit. Never mind that these “smaller-scale daily killings,” as one national news service characterizes them, are far more common.

The victims of homicides from mass shootings totaled 151 in 2012, reports motherjones.com. There were 131 homicides in Oakland alone last year. The city of Chicago ended the year with 506 homicides, according to the New York Times, while officials in Detroit said that the number of lives taken was 411.

While having never uttered a peep about the daily killings that plague cities across the country, President Obama broke into a National Football League game telecast last month to make a solemn, sincere pronouncement in response to the 28 people slaughtered in the Newtown, Connecticut massacre. Photos even showed the president apparently – and understandably – wiping away a tear over the bloodshed.

Then, on January 16, the president called a major press conference to announce measures to reduce gun violence, including background checks, and bans on assault weapons and ammunition clips that hold more than 10 bullets.

To be very clear: those mass shootings were awful. They all are. Painful, heartbreaking tragedies, and I feel for any parent, husband, child, and friend who has lost someone they love this way.

Maybe you can chalk it up to the general attitude of politicians when it comes to addressing certain cities’ dilemmas. Take California governor Jerry Brown, who said “Certainly I want to help where we can, but Oakland has to solve its own problems.” Please.

Some people I’ve spoken with claim that the Newtown killings got a White House reaction because the victims were white. Actually, a lot of people seem to be saying that. And they’re not all non-white.

A Washington Post article reported that mass murderers are overwhelmingly white middle class males. And, according to Northeastern University criminal justice professors James Fox and Jack Levin, most of the victims of mass murderers are white.

Curiously, you never hear the phrase, “white-on-white crime.” So unrecognized is the idea of white-on-white crime that Wikipedia – which normally has an entry for anything you’d ever (or never) want to imagine – doesn’t even make any mention of it.

Do a Google search on “white-on-white” and you’ll find entries for a cleaners,  a bridal shop, a designer of decorative items for the home, and Jack White, a musician who fronts the White Stripes band. But you’ll get no results for white-on-white crime.

But punch in “black-on-black” on everybody’s favorite search engine, and one of the first results you’ll see is a definition, courtesy of merriam-webster.com: “involving a black person against another black person, as in black-on-black crime.” Most of the search results for “black on black” appear to be about crime, violence, or rapper’s lyrics.

And yes, Wikipedia does have an entry for black on black crime, which redirects you to “Race and crime in the United States,” where there’s still no mention of white-on-white crime.

Maybe, despite what so many critics in big cities are claiming, the president’s reaction to mass homicides didn’t had anything to do with the perpetrators’ and victims’ race. There is, after all, no such thing as white-on-white crime.