To a Cop On a Chase, a Stolen Car May Be Worth More Than Your Life 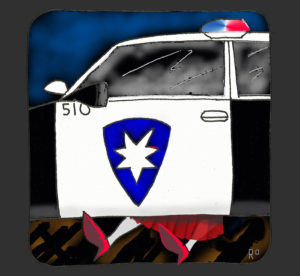 What’s more valuable, your life or a stolen vehicle? To most people, that’s probably a no-brainer. Your life, of course.

Let’s rephrase the question. What’s more valuable to a police officer chasing a suspected car thief – the stolen car, or your life?

Judging from the frequency with which innocent bystanders are getting injured or killed as a result of a high speed police pursuit on busy city streets, you might say that a human being’s life doesn’t carry quite as much currency as an SUV on the run.

Just last Thursday, three people were injured in San Francisco’s busy South of Market area. Police were chasing a Lincoln Town Car that had been reported stolen. The pursuit led to a collision with three other vehicles, including a car driven by an Oakland man whose passenger had to be taken away on a stretcher.

And Sunday night, KTVU reported that the driver of an allegedly stolen sport utility vehicle was killed in San Jose, losing control of the SUV and crashing after a police chase on Highway 101.

On the last Saturday of January, the California Highway Patrol were alerted to an SUV that had been reported stolen in El Cerrito, and chased the vehicle all the way to the Oakland hills, resulting in a collision that left one passenger dead and four others injured. The driver got away.

Just before the New Year, the California Highway Patrol’s chase of a man in a BMW after a routine traffic stop in Oakland turned tragically deadly when the BMW plowed into the side of a car transporting five passengers, killing one and leaving three others injured.

A witness to one of the police-chase killings in Oakland was quoted as stating that “these kids” need to learn to make better decisions and be accountable, and that what they’re running from isn’t worth risking your life.

But those lessons appear to be ones that “these police,” in their positions of authority and as public servants, should also be held responsible for learning. After all, it stands to reason that if these suspects or traffic law violators were not being chased at high speeds on city streets by police, this unnecessary maiming and killing of innocent bystanders would not have occurred.

In a 2011 internal review of the Oakland Police Department’s pursuit policy and practices, the OPD’s inspector general found that police tracking of pursuits and accountability for those pursuits was seriously deficient, with barely half of the pursuits being reported as required, and much of what was reported being inaccurate.

The inspector general also found that police were reluctant to end pursuits even when conditions were extremely hazardous, perhaps explaining why 21 uninvolved third parties were injured in a 19-month period as a result of crashes of police-chased vehicles. The inspector general cited evidence of a police culture that minimizes the threat of injury that police chases pose, and places a greater priority on catching a supposed offender, even if the offense is relatively minor.

What makes these cops engage in such risky high-speed chase behavior, with such utter disregard for the human lives that are held in the balances? Would they act this way if they worked in their own suburban neighborhoods, where most of them live, where their own daughters, mothers and sons might be walking down the side street on which they’re hitting 90 mph in pursuit of a red light runner?

Somehow, I don’t think so.