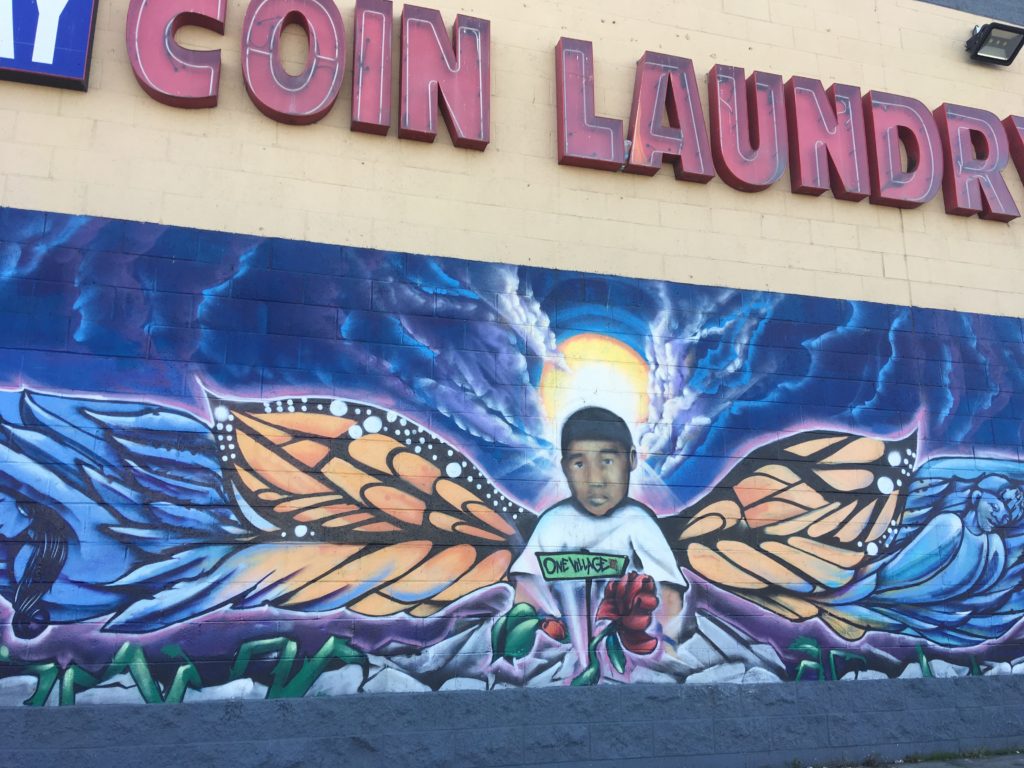 The East side of the O in the Wild Wild West, California’s desert and no man’s land.  This desert isn’t only craving water but thirsty for so much more.

Seminary to Havenscourt is not yet “the deep” but it’s so deep. Liquor stores and laundromats; check cashing’s and smoke shops.

The largest most dominant landmark along International between Seminary and Havenscourt is capitalism at its finest, staking claim to our bellies and our minds. Smells of greasy french fries pouring out into the streets luring people in to spend their last dime. None other than Mr. Ronald McDonald’s creepy white face summoning in the masses and laughing at the way his plan has been successful beyond measure.

The McDonald’s not only serves as a cheap addictive source of weight in one’s belly, but it’s entrance way acts as a nook for the man who is always laid out in front and often times sits up to pull the door open, asking for spare change. There is always a group of older men who eat breakfast together in the morning and never forget to tell all the girls how pretty they are as they make their way to the line. There is always a baby or two in a stroller, usually with shoes but often times not, and black soot hugging the bottoms of their feet.

Inside is always some wild and crazy episode of “What’s going on at Mickey D’s today?” One morning I went over to get some coffee and an older man and woman came in yelling. They looked like they hadn’t had a hot shower in days; the woman had matted hair and a short skirt and the man, who was a little shorter than she was, was all in her face pushing her, telling her he “wasn’t playing with her.”

I was at the register and I looked at the cashier and she looked back at me in the same disbelief like, “Are we going to have to all jump on this guy and save this woman when he swings on her right here in the McDonalds line”? The man was pushing her all around the area in front of the counter, everyone was looking and getting ready to jump in when suddenly a new character entered the scene, stage left, and jumped onto the counter with his wire cutters. He grabbed the “donate to end cancer ” box and cut the wires connecting it to the cash register. In no more then 2.5 seconds he ripped the metal box from the counter, coins  flying everywhere, and he sprinted out the front doors like a quarterback for the Raiders. What in the hell just happened, I thought. The man continued to push the lady right out the other door on the drive through side. “It was all part of the plan!” said the young lady working the cash register and shook her head.

Another day about mid afternoon a van speeding down International lost control and crashed into the entrance, driving right up onto the curb. Still another time, there was almost a fight in the drive through- all you heard was a lot of yelling and then you saw a man get out of his car and walk up on the car behind his.

You never know what you’re going to get at McDonald’s on International between Seminary and Havenscourt, a Big Mac or a wild scene of pain and poverty. Capitalism constructed a dark situation, where unhealthy food is sold across the street from the housing authority housing complex and down the street from the liquor store.

The parking lot is the pick- n- pull car parts hook up with all kinds of cars propped up in the far corner, sometimes with hoods up being filled with water or coolant. The usual suspects are always laid out in front- covered in grime, in need of a hot shower -under the dying flower baskets that sit below the windows. East 16th, the one-way street directly behind the McDonald’s has become a local dumping spot for everything from old mattresses to dressers and just piles of clothes.

Across the street is the Little Caesar; they have bullet proof glass and you have to speak through the opening. Next door is the mural of the toddler who was killed by a stray bullet years ago as his mom was pushing him in his stroller. The mural is below the big COIN LAUNDRY sign and the little boy is in front of the moon with monarch butterfly wings and a red rose breaking through concrete.

But sprinkled in between the liquor stores, the laundromats mats, the McDonald’s and Little Caesar there are hope dealers, serving up hope for the Lo (low price), no taxing. Every morning I see the same monk in his burnt orange robe and prayer beads walking down Seminary to International. I’m not sure how he got there or how long he plans to stay, but he is there, everyday like clockwork.

The Rainbow Recreation Center’s entrance way , decorated with  vibrant murals of the Black Panther Party, sends messages of a time when our people fought by any means necessary to have hot breakfast for kids, community health clinics and community policing, to all the young people standing out front or going in to shoot some hoops.

Every Friday morning the church on Seminary and East 17th has a line around the corner of people with their bags and push carts to pick up donated food.

On East 17th and 62nd, behind the McDonald’s is Alternatives in Action High School, where I work and where young people show up everyday against all odds to be seen, to be heard, to build community, to hold space and have space held. Just last week the seniors finished their college applications. Not all of them, but a good 75 percent. And it was no easy feat. It felt like a never-ending process of “I give ups” and “No I’m not going to do it”, to late nights after school and reading and re-reading college essays. Young people whose parents didn’t finish high school learning how to navigate the systems of higher education. Young people who would be blessings to any institution of higher education out here, because their stories tell the unfiltered truths of survival, loss and learning to love when no one has shown you how.

The joy and the pride of college application submissions reverberated through the concrete like an electric shock. Now I’m not saying that college is the end all be all pot of gold at the end of the rainbow, quite the contrary. But the power of saying yes I can, after everyone has told you no you can’t will move mountains.
Across the street is Green Leaf Elementary where 3rd graders are learning mindfulness techniques – how to stop and take deep belly breath’s when everything around you feels like it’s crashing down. And hope is dealt everyday, sprinkled through it all.