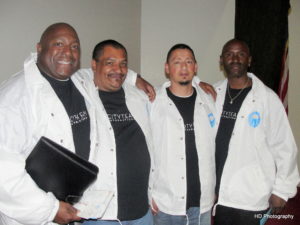 Members of City Team participated in the Lifelines program at Allen Temple. They have since started their Friday Night Walks. Photo: Howard Dyckoff, Oakland Voices 2012.

Oaklanders are marching to demand an end to gun violence.  There have been youth rallies, peace marches and on-going night walks in the most violence-plagued areas of East Oakland. Many of these events are headed by church groups and community organizations banding together with the City to re-launch the Cease Fire program that Oakland first attempted 3 years ago.

Pastor Mike McBride is helping the city foster this new relationship with East Oakland neighborhoods. “With so many young men being killed each year,” McBride said, “we believe that as a community of faith, we have to take action and press for the full Cease Fire model.”

City leaders plan to kickoff the new program with its community partners before the end of this month. The Mayor’s Office and Oakland Police are working closely with several of these organizations to implement Cease Fire in several neighborhoods.

One of those is the national, faith-based  group Pacific Institute for Community Organizations (PICO). Even though Oakland has gone for the last 3 years without an official Cease Fire plan in place, Oakland’s PICO office has developed its own programs inspired by Boston’s successful Cease Fire strategy.

PICO’s Lifelines to Healing project aims to reduce gun violence in high-risk communities through a coalition of community groups, local clergy, and government agencies at all levels. Lifelines first brought together local church leaders – including Pastor McBride and Rev. Billy Dixon, Jr. – to head Friday Night Walks, during which marchers listen to the concerns of, and show solidarity with, residents in East Oakland’s more violent neighborhoods. “We are planning on going out rain or shine,” Rev. Dixon said, “and eventually we will be moving to all the parts of Oakland that need this kind of attention.”

The group has also coordinated with the recent Peace March from both East and West Oakland to City Hall that was planned by Soldiers Against Violence Everywhere, a faith-based group in Oakland.

Oakland’s Lifelines is a new project. Mayor Jean Quan and activist Rev. J. Alfred Smith, Jr. announced the project last month at Allen Temple. But many residents who attended were hopeful for its success, including Marilyn Lawson. She works with youth in East Oakland and has been involved with the family of Hadari Askari – a 15-year old shot to death in Oakland in July.

Lawson said she hoped city officials and all of her neighbors would “come outside of their comfort zone and get out in the community.  I’m going to continue to work with people in my community, especially the youth, so that they can empower themselves in a positive manner, while continuing to work towards having a better dialog with the police.”

Oakland first tried Cease Fire effort was incompletely modeled after a program created in Boston in the late 1990s. That city’s Cease Fire evolved into a long-term partnership between city administrators, the police department, and  black clergy who worked directly with gang members and offer alternatives to violence. Boston’s program put legal and social pressure on influential gang members.

In Boston, the program worked, according to the National Network for Safe Communities (NNSC) – an organization that helps implement Cease Fire and other anti-violence programs across the country. Because federal and county law enforcement agencies were part of Boston’s Cease Fire enforcement coalition, agreements were struck with gang members, and violations and bad behavior were met with stronger legal penalties. Failure to avoid violence meant strong enforcement and maximum sentences, both for the targeted gang members and others in the gang.  That added peer pressure helped the agreements work

Other Cease Fire programs modeled on the Boston experience also take this carrot-and-hammer approach, making it clear that no further violent behavior will be tolerated.

Boston succeeded in reducing juvenile shootings to zero for several months and Cease Fire programs in cities like Stockton and Chicago have show reductions in homicide rates of 30 to 44%.

“When the [violence] intervention is well implemented,” explained David Kennedy, director of the Center for Crime Prevention and Control at John Jay College of Criminal Justice in New York, “there are significant results in  the target cities. And when these programs are reduced or stopped, the intervention that violence creeps back. ”

“In some projects, only a few neighborhoods were targeted, so these can be compared with areas that were not targeted,” said Kennedy, who was involved in the original Boston Cease Fire program and has been a resource for Oakland’s latest effort. “Some cities have compared reductions in gang violence by individuals and we see impact on the targeted individuals and not on others.”

Research on Cease Fire’s impact suggests that increased safety and order in a neighborhood encourages residents to follow legal and social norms and solve problems collectively.

Critics and city officials alike say Oakland’s Cease Fire failed in 2009 because there was no coordination between city administrators, neighborhood organizations, and sate and federal law enforcement agencies.

“[Oakland’s first Cease Fire program] didn’t have full city support and no technical assistance or support from the powers that be,” Reygan Harmon, the mayor’s staff person focusing on public safety, acknowledged. “Also, there were not enough [community] partnerships across the city.” Harmon also explained that, at the time, Oakland “was not under contract to provide services for Cease Fire, so it was not fully implemented.”

Another problem with the first effort was the lack of on-going support by community organizations to work closely with at-risk youth and returning offenders. For this latest effort, a broad coalition of clergy and Oakland churches is already active and taking to the streets.

Oakland Police Sgt. Christopher Bolton said the new Cease Fire will fix some of those mistakes by involving “partnerships with the entire community.” Pastor McBride and Rev. Dixon are working closely with city officials to forge those relationships and get Oakland residents involved in Cease Fire-related programs. “We don’t believe you can do Cease Fire without getting everyone on board,” explained McBride.

To ensure Cease Fire’s success this time around, Bolton said that the Mayor’s Office is “enhancing” its partnerships with several city, county, and federal agencies, including Highland Hospital, State Parole, and the U.S. Attorney’s office.

Bolton said the city’s main partner is the NNSC, which is providing technical assistance and direction on implementing Cease Fire to the city through the California Partnership for Safe Communities.

Oakland will fund the new Cease Fire program with a $2.2 million grant it received two years ago from the Department of Justice as part of the federal Community-Based Violence Prevention Demonstration – designed to offer cities several ways to reduce violence, including outreach and education, job training, and employment.

With this money comes strong planning and administrative help from community non-violence advocacy groups, and from John Jay University. The federal grant calls for the City of Oakland and its partners to conduct call-ins – face-to-face meetings with 250 parolees and probationers with histories of gun violence.

In September and October, there were on-going meetings with all participants in the Cease Fire coalition to hammer out working agreements. This is all led to a formal announcement  in late October when the program  finally started.

While many people are happy to see Oakland launch a well-funded, more robust Cease Fire project, there are also reservations about how the community will be involved.

Few people want to see an end to youth violence more than Kazu Haga, who has worked with Oakland youth.  Haga, an Oakland-based Kingian Nonviolence trainer and co-founder of the Positive Peace Warrior Network,  supports any effort to reduce violence. But he feels that ending gun violence in Oakland requires deeper and longer term efforts.

He spent several days recently working with youth at Castlemont High School after the ethnic violence there. “Their sense is that if the city can’t keep their own police force from killing Oakland youth, why should they? ”

“Cease Fire is very different in each city it’s implemented,”  Haga explained.  “Boston’s had a very short term impact, before violence shot up again. I think the short term success is partially because of how law enforcement heavy it is. Increases in law enforcement have, at best, a short-term impact but you’re not really changing the conditions that create crime.”
Haga said Chicago’s Cease Fire model worked because it “empowered community members to work in their own community,” and because that city’s local Cease Fire projects “were not controlled in any way by law enforcement.”
In contrast, Haga said, many of Oakland’s Cease Fire advocates are directly connected to law enforcement and neighborhood policing initiatives including Measure Y, which “has a rep on the streets as being too tied into the city and OPD, so there are a lot of people that don’t trust them.”