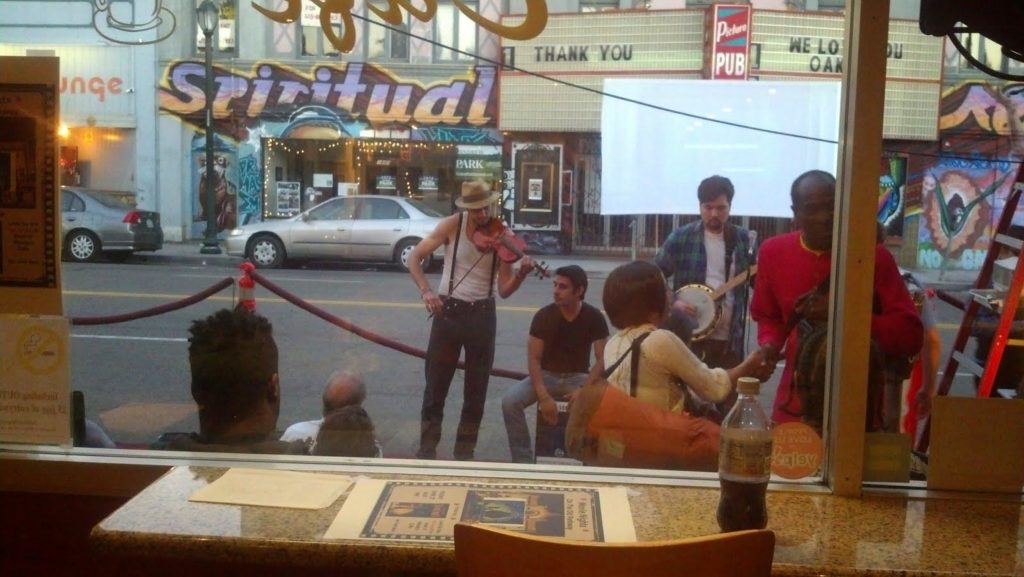 Inside the Parkway Theater on E. 18th Street, the seats are empty and the screens are dark. But
across the street outside, a small crowd gathers around the storefront of Woody’s cafe to watch
a single showing of a movie projected onto a screen outside the old theater.

Families and college kids are setting up chairs and chatting with neighbors before the animated classic “My Neighbor
Totoro” starts. There is a red-carpeted “parklet” set up in three parking spots in front of the cafe,
where local trio State Secrets plays a banjo rendition of the theme song from Tetris, an 80s video game.

Steve Ma, owner of Woody’s Cafe and one of three coordinators of “Movie Nights on the Old

Parkway”, takes a moment to explain the choice to do these monthly movie nights outside his

cafe. “We could have had this at FM Smith park, but it was too closed off. We wanted people to

be walking by and stop to see what was happening,” he said.

Fellow coordinator Claudia Ellinghaus explains how it all happened. “People didn’t come here
after the Parkway closed, and safety was a concern,” she said. At a neighborhood meeting,
Claudia suggested some kind of community movie event to keep the neighborhood vital after the
theater closed in 2009. She was introduced to Ma, who also hoped to revive foot traffic in the
area after he lost business at his cafe.

Ma and Ellinghaus got in touch with newcomer Javier Amaro through community contacts. His

enthusiasm for the project, as well as experience coordinating live events as a part-time
musician made him a good fit.”We do this to maintain people’s attention to the area,” Amaro
says.
And so after a year of planning, Movie Nights On the Old Parkway was born. “We used our own
money. We rented the projector, made the screen, bought the red carpet” says Amaro.
Musicians, volunteers, even the man who assembled the popcorn machine are sourced from the
attendants and various social networks.
The group recently obtained a grant from the city to continue with the monthly summer movie
nights. They hope to purchase a new projector and screen with the funds. When asked if
permits were an issue for having live music and video projections in a public space, Steve Ma
smiles and says “I have a good relationship with the local police.” 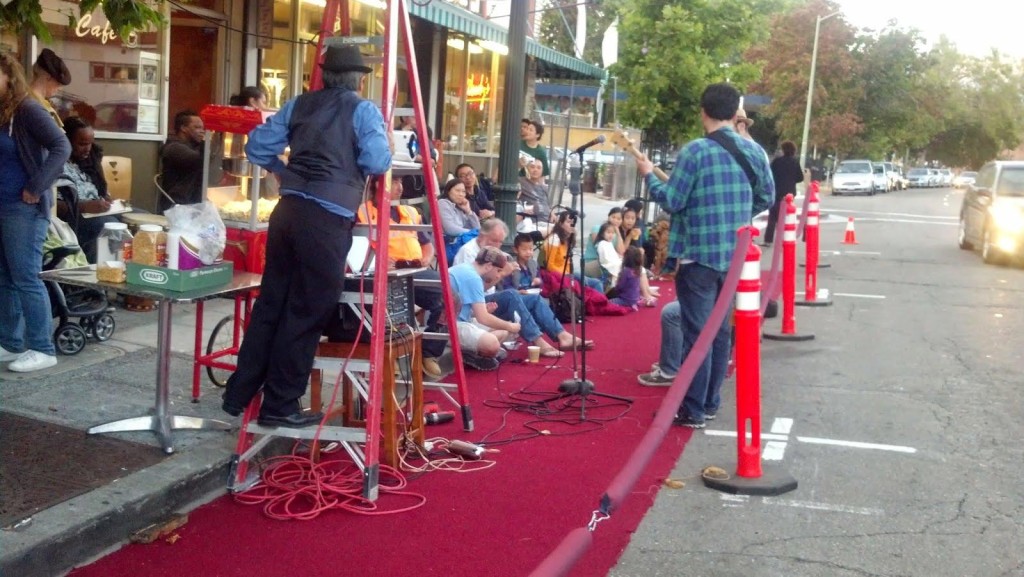 In its prime, The Parkway was a “neighborhood living room”, where people could drink beer, eat pizza, and relax on couches to watch a movie. After it was closed, various local groups raised close to $400,000 to invest in reopening the theater, however bringing the building up to code proved too costly.

The management has since opened up a New Parkway theater in downtown Oakland and the old Parkway building is on its way to becoming office space.

As is sometimes the case in Oakland, it took a bit of community ingenuity to rewrite the ending to an unfortunate story. Bring your own chair; popcorn is free. Movie nights on the Old Parkway take place the last Friday of the month from May through September.
For more information, visit Movie Nights On the Old Parkway on Facebook.