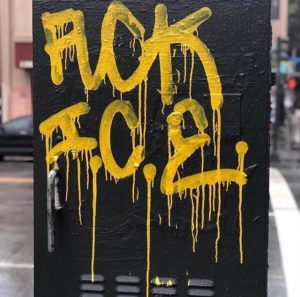 Class was almost over; we were finishing up when Mario jumped out of his seat. “Awww shit,” he sighed with a look of disdain on his face.
“What’s up, you ok?” I walked over to where he was. He had no words, he just held his phone up to my face. I looked at his phone and saw on the screen a message sent out on Snapchat “ICE RAIDS hitting the Fruitvale, tell all your friends and family to be safe out there.” (ICE is the acronym for Immigration and Customs Enforcement.)
“Who sent you that?” I instantly became concerned.
“This girl I know at Arise posted it; the school made an announcement. We gotta make an announcement, shit, this all bad.” He was in a nervous panic, you could almost see his heart beating in his chest. He rushed to the doorway and swung open the computer lab door. At that exact moment Lizbeth, our office coordinator, an old friend and longtime organizer ,was walking through the hallway. Lizbeth always has a calm, grounded demeanor like the deep waters in 100-year-old caves.
“Liz!” I called her name in a nervous excitement to see her. I knew what the threat meant to some of our students and their families and in all honesty, I was scared. “Have you seen this?” I passed her Mario’s phone. She took a minute to look at it. Her perfectly winged eye lined eyes looked as though they were looking into other worlds to receive messages beyond what was written.
She calmly turned back to me and Mario .
“OK. Have we heard anything from anyone about sightings? Has anyone seen an ICE agent? ” She said calm and collected, to reground us. She turned to me.
“Before we make an announcement or alarm the students, let’s get some facts.”

Just days before Lizbeth and I stood in the line at McDonald’s waiting for our coffee having a conversation about how the government was “out of service,” shut down. ‘United States Federal Government shut down’, were the headlines everywhere. The United States government literally stopped functioning because they could not agree what to do in a dispute whether or not to continue the DACA (Deferred Action for Childhood Arrivals) program.
“We’ll see what they decide tonight,” Lizbeth said to me in a deep sigh. Lizbeth is very open about being undocumented. She is a strong support to students who are struggling through what it means to be undocumented and navigating systems of support. When I asked her how she was feeling about everything going on, she looked me straight in my eyes and reaffirmed that she has been here surviving and thriving and she will continue to do so, “This ain’t nothing new.”

A few days later a student of mine came rushing up to me in the hallway. “Hannah I gotta transfer.”

“I need to graduate by 2019, and they’re saying I can’t get my credits from last semester.”

“Come on let’s go out front.”
Sylvia sat down next to me at the round green wire table in the front of the school. Sunbeams reached down through the crisp cold air. The sky was a puzzle of grey, with blue pieces fighting to come through.  The grey clouds and telephone wire backdrop hung low as Sylvia’s hand tapped the table. We called another school; they were no longer accepting students this semester but she could finish here and start there in the summer.
“That way I can get my credits up and still graduate in 2019, huh Hannah? I gotta graduate in 2019.”
“Yea if you get all your credits this semester and go there in the summer you should be able to graduate by 2019.” I did some quick calculations. “Why do you need to graduate by 2019?”
“My mom has to leave. Her TPS (Temporary Protected Status) will expire. She has to go back to El Salvador, you know with everything going on and I want her to see me walk the stage and graduate before she has to leave.”
My heart dropped. Damn. Our home. Our mothers, the first place we know. Where we are nourished and safe, where we grow. What happens to the children whose home is ripped from its home? When re-rooted roots are again ripped from the earth. And what you know as safety and protection is not welcome. What happens to the children who look out ahead and in the dream they once chased, they are standing alone. Didn’t Langston once question what happens to a dream deferred?

I saw the hurt in Sylvia’s eyes. “I want my mom to see me walk the stage. Like she needs to see me walk the stage.” Syliva had one shot. She had to now somehow make up a semester worth of credits, take classes in the summer and transfer to a school with a lower credit count in order to graduate in time. Because if she didn’t, her mother, who works hard day and night to make sure she eats well, has warm clothes on her back, holds her tight when the world seems to be crashing in, will not get to experience one of first huge accomplishments in her life. She will not get to see Sylvia graduate from high school. While Sylvia’s immediate concern is her mom getting to see her walk the stage, what happens once that’s over? What happens after she walks that stage and wakes up to her mother not there?

This country knows all too well how to systematically destroy families. We saw this in the peculiar institution of slavery in which this country was founded. Tearing daughters and sons from mothers, tearing husbands from wives. We continue to see it through the prison industrial complex and “tough on crime” policies.

In January, the Trump administration ended the policy around TPS (Temporary Protected Status) and ordered that all people here under Protective Services seeking refuge in the U.S. from a war torn country, leave. Leave? What does this mean for Sylvia and her siblings, what does this mean for the thousands of children whose parents are now being forced to leave, yet they are allowed to stay?