I’m leaving my $1400 – a-month two-bedroom rented house, locking my closet door; otherwise, known as my front door, with the leaky roof above it.  I lock the two locks on my security door and walk down the steps to my non-shrub lined trail because someone has stolen them!  Neither my front nor back yards have grass because someone has stolen the two packs I’ve purchased on separate occasions, from the inside of my house!  And, as usual, no matter the time, a neighbor is coming in or out of the alley leading to the apartments in the back.

When we moved in, three women, and with several men hanging around, stood by but not one offered to assist.  The best welcome to the East Oakland neighborhood was when my car window was smashed.  Stay, they seemed to say, when my table umbrella, wind chime, and hanging tomato hanger were destroyed, through a tall, locked gate!  Sitting outside on the porch is met by cigarette smoke and loitering. 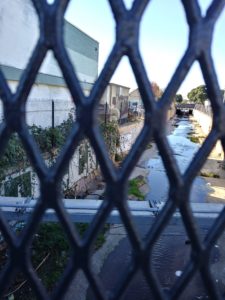 I love the beauty of California and quality of life it offers. I do my best to keep up the standard.  This is made hard by neighbors who constantly litter, are extremely loud, and volatile.  When I’ve asked them to stop, I’ve been cursed and threatened.  The landlord, police, and courts have been involved; however, still I live with very little peace on my City of Oakland neighborhood block.

A 360-degree view of my neighborhood includes mountains behind me, BART trains in front and  a wide, yet dense, high-traffic residential/commercial area.  There are aqueducts within a few blocks that look like long ponds and a small park around the corner.  I can’t walk past the aqueducts without staring and reflecting.  I’ve never seen any children in the park, mostly men. 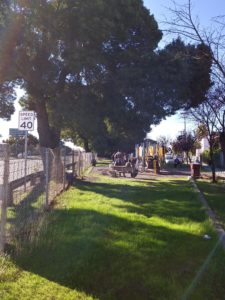 California is like a big suburban town; however, my neighborhood’s urban feel may fool you.  On every other corner, you’ll find a church; every few blocks, liquor-convenience stores.  Every several blocks, fruit and vegetable stores that include mini supermarkets.  Three post offices are nearby; however, none within walking distance.  Conversely, there are three MetroPCS cellphone stores within a few blocks of each other offering different additional services:  UPS, purchasing, and check cashing.  There aren’t many USPS mailboxes or phone booths, anymore.  There are two elementary schools and Castlemont High School close by.  The 580 highway is a few blocks away.

Three libraries are within my neighborhood, one along both the #1 and #73 bus lines, actually within walking distance; and one near the Oakland Coliseum (OC) where professional athletic teams play and concerts and other events are presented.  These usually bring the most crowds to my neighborhood.  OC, AMTRAK, and Oakland airport trains are connected to  the OC BART station.   You’ll see UBER/LYFT shared riders, shuttle buses of local employers, and taxis.  The escalators and elevators allow accessibility, convenience, and luxury.

My block is long, as typical in California, and I-shaped.   It consists mostly of older single homes.  There’s one apartment building located directly across the street from me, while The East Oakland Health Center and a car repair shop are down the block.  Illegal dumping occurs frequently in front of the shop, and homeless people reside in their cars.  On more than one occasion, I’ve asked the owner of the business to clean up the unsightly waste that sometimes sits on the sidewalk for days.  Occasionally, people collecting recyclables rummage through the trash.

I can see the East Oakland Hope Faith Center as I head down the street.  It’s pretty when it’s neon-lit at night. The name instills hope in me; although, I’ve only been in it once, to vote.  There’s a bus stop located on the street below and around the corner for major lines that run throughout Oakland to the city of San Leandro, the airport and Eastmont Township Mall (ETM), respectively.  These routes take me to major supermarkets, drug stores, fast food joints and a few restaurants.  However, there are usually homeless people sitting on the bus stop benches.  Actual riders are unable or willing to sit while awaiting their bus.  Maybe one answer to the homelessness is the Acts Cyrene Apartments, opening soon on 94th Avenue, adding 59 residences to our community!

For the past few months, there’s been construction along the bus line on International Boulevard.  According to a fact sheet emailed to me by Robert Lyles of AC Transit, an $178 billion dollar project called The East Bay Bus Rapid Transit (BRT), paid for by them and other agencies, is going to be a light rail on wheels (like in San Francisco/San Jose).  It’ll provide faster, more convenient service such as the ability to pay on the platform. But there hasn’t been much construction for several weeks, only an out-of-date “No Parking from 8/28 – 10/2017” sign.  I  spoke with Avraham Halwani of Avraham Supplies, who says it’s hurting business because there’s no room for parking. 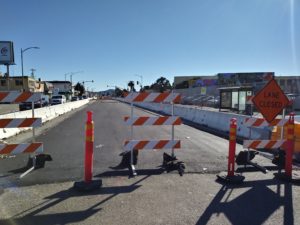 Halwani also said a nearby furniture store is going out of business but there’s no indication.  Halwani’s business has been in East Oakland for several years but is moving due to the poor location for his product of restaurants and bakery equipment.  Contrarily, Perry’s Furniture’s “Going Out of Business” sign is large!  In  a phone conversation, the owner, Shawn Perry, said after 65 years in the community he is closing due to health reasons. The expected closing date is by February and they’ll probably be moving out of state.  Everything is currently up to 75 percent off!!!  I’ve written to the city about using it for a 99 Cents Only Store.  I like to purchase my fresh fruits and veggies there instead of the flea and farmer’s markets.

There used to be three nail shops in a two -block radius, one moved a few months ago.  Now it’s a Metro PCS, next to a corner store that I use less often than the one kitty- corner due to prices and inventory. The next block to the left sat Prime Time Nutrition, mostly for WIC clients, recently closed; there’s another at the Eastmont Mall.  H&M Laundromat is a few doors away, they’re costly as well.  Crossroads Shelter and McDonald’s on 73rd have similar abstract architectural designs in an otherwise regular-looking neighborhood. 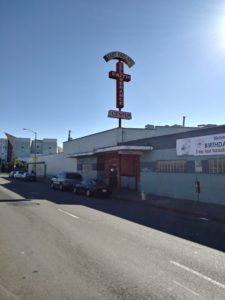 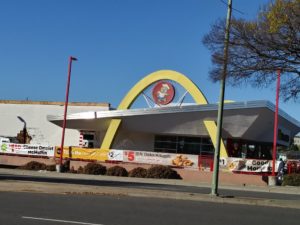 In the next block to the right stands Roots Caribbean Restaurant and Braids and Locs; they popped up pretty quickly a few months ago.  Last week I noticed a Cash for Gold and Silver Store.  The CP Bannon Mortuary and the East Oakland Hope Faith Center sit amidst all, both have large parking lots.  I wonder if they’d make them multi-level if they’d generate revenue for them and build the community.  A new BBQ joint is opening soon across the street from ETM.  A bus depot with the bus connections for several lines sits at ETM that’ll bring consumers from downtown Oakland, San Leandro, and Lake Merritt, an Oakland scenic attraction.

As I board the bus, I’m reminded how a lot of the time, people don’t exhibit manners.  They bump into one another without excusing themselves, they don’t prepare their money before boarding, and they pass gas unapologetically.

In general,  people don’t come outdoors much. However,  one still hears the “N and B words” regularly, and kids talk to adults as if their equal.  Males physically fight females and multiple people are known to assault a singular person.

In conclusion, my neighborhood is diverse, inclusive, and growing but has some major, domestic problems.