The Kinfolks Motorcycle Club’s annual Thanksgiving dinner at Palo Vista Gardens is still an hour away but the dinner guests are already gathering. Joanne Berstine, a 35 -year resident of the senior housing residence, is among the first to arrive. “I know everyone of them church-going boys” she tells me in the light-filled community community room. “And I stand back with tears in my eyes and rejoice. That’s how good they are.”

With the sound system cued to a steady stream of soulful tunes amidst occasional raucous roars from the kitchen where the cooks are prepping the feast, a team of residents puts the final touches on table settings and serve up refreshments.

E (no period!) Riller, a former resident, has walked over a block  through the fence from Lockwood Gardens. “Don’t get me started,” she says. “They go under bridges to feed the homeless. No matter what color, what age, no matter where you come from, those are a truly marvelous bunch of men.”

In the kitchen, a half dozen members of the Kinfolks Motorcycle Club are busy carving the six turkeys that they have smoked over the previous two days. Michael “Bear” Price pauses to offer me a taste as he glances through the window to the dining room. “They be waiting for us,” he says. “Just to see them, the smiles on their faces. This goes to the heart.”

Head cook Joe “Chase” Gullat who runs a catering business explains, “We have fun doing it. We hang out and by the time we’re done joking around, we’re done.” 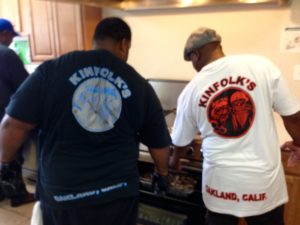 Gullat shrugs off a popular image of menacing motorcyclists and is quick to correct my use of the word, “gang.”

“Bike clubs get a bad name. You’ve got the good and bad in everything you do,” he says. “If one of us gets out of line, we’ll just go tell their mom. We bring Thanksgiving dinner to the seniors here because we can’t forget where we came from.”

Over the clanging of pots and pans on countertops and the rustling  of tin foil, fixings are being put together – home-made potato salad, a green beans and potato medley, and dressing from a secret family recipe. Amid the busy preparations, the Kinfolks aren’t above dishing out friendly jibes at each other.

One of the younger members, Les Washington, needles Cousin Curt: “He’s our AARP man. We go to him to get the discount. Every little bit helps.”

“I’m one of the oldest,” says Curt. “That’s why they give me a hard time. Them’s my little cousins, that’s where the name comes from, we’re all kinfolk. It makes a difference when you’re all raised together. But sometimes, like now, we ain’t related.”

The 15-odd members of Kinfolks are, in fact, all related and grew up together not far from this Havenscourt neighborhood. Brothers, cousins, and children of siblings, when the Kinfolks ride these days – to Stockton, where they have a clubhouse, Bakersfield, and as far as Atlanta, GA – they’re doing what they’ve been doing since childhood, having graduated from mini-bikes to dirt bikes to motorcycles.

Eight years ago, when a of couple family members were residing at Palo Vista Gardens, the club served up its first Thanksgiving dinner. “We took to them and they took to us and we’ve been doing it ever since,” says Curt.

By dinner time, the eight round tables are filled with 85 dinner guests, with roughly half sporting Kinfolks t-shirts. Each guest is personally served by a club member. Second helpings are encouraged. Joanne Berstine wants more dressing and promptly receives a generous portion. Dinner conversation is light, mainly compliments to the cooks and some talk of joining family tomorrow. But mostly, the residents of Palo Vista Gardens simply enjoy the meal. By dinner’s end, a half dozen of them form a dance line and sway to the old blues tune, “When It Rains, It Pours.”

Arms folded, nodding approval to the beat, Kinfolks business manager Aaron “Boss Hog” Johnson tells me, “They remind me of my grandparents. We were trying to find a way to give back and found this community. It’s a pleasure just to see the smile on their faces and sit here and talk to them. It’s just the love of giving back.”