My Spiritual Aunt – in English and Spanish 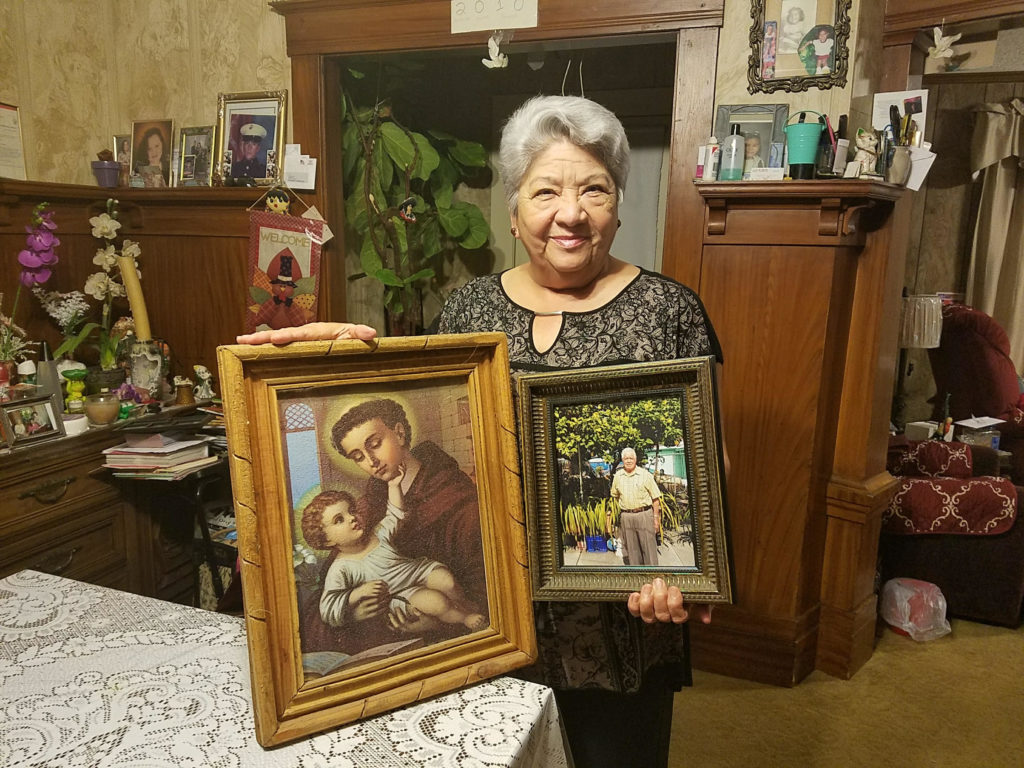 When I was younger, I lost my wallet and turned my house upside down looking for it. I had worked a graveyard shift at work and after resting in the morning, that afternoon I went to get dressed and I couldn’t find it. I frantically tore my room then the whole house upside-down looking for it.  As I growled in anger, in walked help through my front door in the form of my aunt, Socorro Guzman.

She was married to my uncle, Maximino Guzman, so she wasn’t related by blood and there was always a different aura to her than to my other relatives. All my aunts were religious, but she had a spiritually that was flamboyantly shamanistic. She asked me what I lost and then she put her hands on my forehead and, calmly, asked me to follow her in a prayer. We both stood in my dining room and, as my heartbeat returned to normal, she then told me that my wallet wasn’t at my home at all, that I needed to look for it at work. That night I found my wallet in my locker at work.

“I prayed to St. Antonio for you,” she said when I recently asked her about that day. Turns out St. Anthony is the patron saint of lost things, lost people and lost souls.

“I did the same thing another time when your brother couldn’t find his wallet and then we prayed together and he found it! He then lost it again and called me frantically asking me to pray to St. Anthony for him and I told him ‘No! St. Anthony can only help you once. You’re on your own now.’”

I sat down and asked her where her spirituality came from, “When I was young and I misbehaved, I would always go to church and I would also read the book “Imitation of Christ,” without that book, I don’t know where I would be.”

It was this belief and prayer that got her through the deaths of my uncle and two cousins — her daughter and son –Lourdes and Armando, in a span of three years. Armando died on the one-year anniversary of his father’s death.

We sat in the same dining room that hosted so many family parties growing up. “We have lived here now for 46 years,” she said. Around her living room, she has pictures of her grandchildren, great grandchildren and of my uncle and my two cousins, plus, a variety of religious figures as she points out a picture of St. Anthony looking down on us.

She remembered how a picture lead her to meet my uncle. “I was friends with one of your aunts and when your uncle saw a picture of us, he told his family, ‘That’s the girl I’m going to marry.’ I had’t met him yet and didn’t know about this. I asked your aunt, ‘I hear you have two brothers here. Introduce me to one,’ and she showed me his picture and I told her, he’ll do.”

We all had a complex relationship with my uncle. There was a joy going to their house because there was usually a party going on, but he was a hard-ass who demanded that we only speak Spanish in their home. With a bunch of kids eager to talk about cartoons, music, and video games, the Spanish-only rule was nearly impossible. (Later my mother told me he was worried we would forget our first language and our culture.) We would move from one side of the house to the other, to the backyard and then back  again, avoiding my uncle as much as we could. “He threatened to hang anybody from his lemon tree in the backyard if he ever caught them speaking English,” my aunt said.

She was with my uncle until his death four years ago. “He had a stroke 20 years ago and when he was in the hospital and we didn’t know whether he was going to survive or not, I went to church and prayed to God that if He let my husband live, I’ll take care of him everyday of my life and I did.”

He never fully recovered from his stroke and she cared for him, running up and down the two floors while taking care of her beauty salon clients downstairs and her patient upstairs. “I would listen to him move around upstairs and would go check on him whenever it got too quiet. Sometimes I would hear him fall, but I was in a middle of a perm and I didn’t know who to help!”

My aunt said she found closure when he said that. “I was so relieved he let us do that for him. He was never really too religious but it put me at ease and I knew he was ready to go.”

That’s how she found closure with her daughter as well. My cousin Lourdes had been battling a drinking problem but refused to get help. “I would ask her if she wanted us to take her to get help and she would ignore us. Lourdes started getting very high fevers and was shaking pretty badly. “Momma, I’m ready,” my aunt said my cousin told her. They took her to the hospital but it was too late, she died shortly afterwards.

My cousin Armando was different. While my uncle and cousin Lourdes endured a long, drawn- out process, with him, my aunt had to deal with a quick and sudden death. My cousin Armando committed suicide and she didn’t suspect anything. “The day he died, we went to visit your uncle’s grave and then we drove around a little and ended at a different cemetery. We got out of the car and he mentioned how quiet it was there. He drove me back home and then he said he wanted to visit his uncle and then that was the last time I saw him.”

Their house, along 36th Avenue in the Fruitvale District, was just large enough that me and my cousins could run and play, free from my uncle’s overbearing rules, but it was intimate enough that when we stopped running, you could feel the vibrations of a lot of cooking, laughing, and drinking reverberating all across the floors and walls of the house.

I asked her how was she able to learn to speak fluent English and run a hairdressing business for so long. “I’ve been a hairdresser for over 50 years now.” (She still has one client she said she sees on a regular basis.) I asked her how she got away with having her own business and speaking English to her clients. “Because that was work. “ They lived in a two-story house and my aunt had her salon on the bottom floor and the family lived on the top floor. “The first floor I was allowed to speak English because of my work, but the top floor was all Spanish.”

The house hasn’t hosted any parties, except sadly, three rosaries, in many years. My aunt no longer worries about the sounds of my uncle but of her great-granddaughter/my goddaughter running around. She said she sits in the living room and sometimes still talks to my uncle, in Spanish.