Cruising Through The Fruitvale District

The Fruitvale District is huge.  I cruised it on three separate days.  There are three business districts surrounded by residences.  I rode up Fruitvale Avenue and walked along Foothill Boulevard a few blocks in each direction from Coolidge to 36th Avenue to Rutherford.  I’ve ridden by the area on the bus on many occasions and it always appears to be bustling. 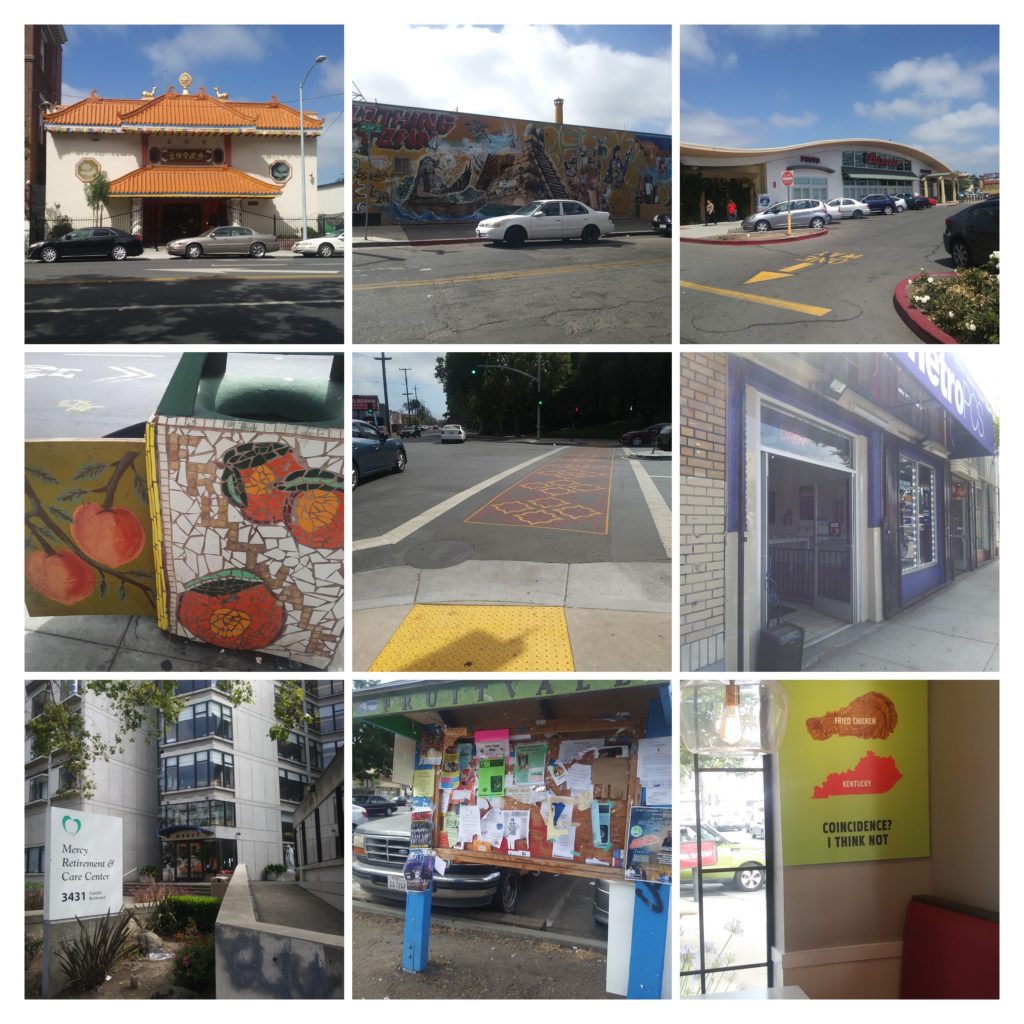 Walgreens is my favorite drug store so I noted it right away.  It’s large, taking over more than half of the block. It has a Redbox inside, DVD video game fans!  It has an abstract architecture design. The Buddhist temple down the street is ornamental. At  Mercy Retirement & Care Center across the street from it, the rooms appear huge with lots of natural light from the large windows.

It’s funny how on one end of the street there is  O’Reilly auto parts DIY, while on the other end is Meineke car care center, along with 1 Auto Repair and A Plus Tire & Wheel., where the work is done by them.  Although I wasn’t hungry, a love for Chinese food and bargains inspired me to stop in at the China Gourmet to sample their small size that starts at $2.15. After ordering,  I was disappointed to discover the restaurant only accepts cash.  There’s one more Chinese food restaurant on this strip.

I saw Reynosa and Los Arcos Mexican restaurants, four others and three food trucks.  KFC was renovated with informative pictures in the inside. Also, Pizza Guys and Pizza City, a bakery, nailery, salon and tatoo parlors; Bay Area Shipping, East  Bay Soccer, and a karate school are also present. Lucky’s Barber Shop was new to me and I plan to get my hair done there.

All of the businesses appeared urban and slightly dirty.  Their clientele were of mixed demographics, although mostly Asian and Hispanic. The trash cans and pedestrian walkways on the streets were artfully painted.  I thought the community billboard was an excellent idea, situated behind the FordGo bikes. The 40 bus runs along the boulevard from San Leandro to Downtown Oakland.

Since 1996, The Unity Council heads the Fruitvale business district.  According to the Wikipedia website, “The area was named by Henderson Luelling, in honor of the many fruit orchards (largely apricot and cherry) which dominated the area in the late 19th century. After the 1906 earthquake, the onslaught of refugees from San Francisco caused a population boom, and the unincorporated neighborhood was annexed into the City of Oakland by 1909.”  According to the Local Wiki website, the area is “home to Oakland’s largest Latino and indigenous population, comprising of 49.5% of Fruitvale’s population.  Fruitvale’s zip code is 94601, …with small neighborhoods, overlapping in City Council District 5.” 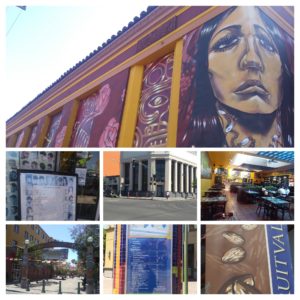 From 29th and International to 39th is part of the Fruitvale District. I walked  by the Goodwill whose ad said they have 50 percent off a different color every Sunday and new low prices such as clothing for $5.99 plus, lingerie for $2.99 and purses for $5.99.  I walked this larger of the two business districts a week or so later.  One of the first things that I noticed was a sign that says the Fruitvale is diverse; however, as I walked through, I could see the businesses are targeting the Latino population.

I stopped in the AC Transit East Bay BRT office.  I was reminded fares were going up on Sunday, July 1st. The project is due for completion by the end of next year.  A flyer says they are hiring in construction. I noted Chase Bank, Bank of America, Citibank, Ace Check Cashing, and Casa de Empemo Pawnbrokers are located in the district for one’s money needs.

The restaurants are mostly Mexican, Mi Grullense Restaurant and Tequila Bar being the swankiest.    I saw a few travel agencies, bakeries, tax preparation businesses, discount stores, naileries, barber shop,  notary publics, insurance companies, all types of medical offices, jewelry stores, cell phone and shoe repair shops, and a church.  The clothing stores are for both genders. There was also a noteworthy amount of wedding stores.

East Bay Wilds appears to be a community garden located in front of an apartment complex on 27th and Foothill.  However, they sell plants, garden benches, statues, planters, antiques, and more and are open everyday but by appointment.

Dominos, Little Caesars and Papa John’s are in the district for pizza lovers.  I purchased some hair gel from Paris Beauty Supply.  There are two Primetime Nutrition centers, the International location appears newer than the one on Fruitvale Avenue.  Oakland Monuments sells headstones from $500-2400, says Rolando, the owner.

Notably, there’s a USPS store, a Fruitvale Shipping Center but they copy, fax, and do IDs according to the window ad.  I walked past A Better Way, Mujeres de Esperanza, Spanish Speaking Citizens Foundation non-profits, a couple of Native American Health Centers, La Clinica, Eyebrow Queen Salon and Opportun, which offers personal loans.  Payless Shoes, Rent-A-Center and T-Mobile are some of the brand stores in the area.

The building at 3136 Fruitvale has been rebuilt from a fire, and is for lease. Fruitvale Public Market, Fruitvale Village and Unity Council are all located in the Fruitvale District within steps of the BART train station.  Unity Council has a senior center that is open Monday – Friday from 9 a.m. – 3 p.m. According to their website, they offer transportation and “over 45 seniors visit every day, many of whom are mono-lingual…  The staff is dedicated to promoting healthy social, educational and physical development through an array of activities.”

You could miss Centro Legal de la Raza.  It looks like an empty building with signs on it.  The hours are posted on a clear poster with black letters on a tinted door. César E. Chávez Branch of the Oakland Public Library is located in the Fruitvale District too.  According to their website, “Spanish language collection is the largest of the system, with 18,500 circulating Spanish items.” They also have a “Seed Lending Library -a free, open to all, without a library card, urban seed project, committed to increasing the capacity of the community to feed itself wholesome food that fosters community resilience, self-reliance and a culture of sharing.”

Brothers and Sisters Barber Cosmo Academy was enrolling students.  The Metro PCS on 37th was hiring and there was a flyer that Avitek Recruit are hiring for maintenance and janitorial.  The residences are mostly single homes.

Approximately one-quarter mile away from Fruitvale Village is Fruitvale Station Shopping Center.  It doesn’t have many stores in it but I frequent FoodMaxx, Sally Beauty and have returned equipment to the Comcast Center.  In March, Ross Stores replaced Office Depot, however, K & G Fashion Superstore, Sketcher, Gamestop and a few fast food joints and variety of businesses remain.