A Woman’s Place – the story of a mural 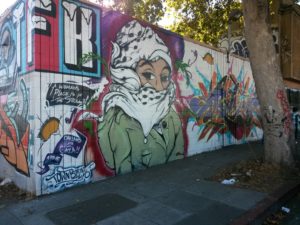 A woman’s place is in the struggle says the San Antonio District’s anonymous artist and community.
There is a story in every piece of art, and this mural located on International Boulevard and 19th Avenue defiantly has made an impact on the neighbors who see it every day.

I first noticed this mural on social media; it was being admired by random people. I saw this art piece around the time Mike Brown, an unarmed teenage black male, was fatally shot in Ferguson MO. This was and still is a depressing time for me as a community correspondent to be inspired to write a story, with all the media coverage every day showing the same thing. Young, and old black, and brown men being gunned down like animals left and right by white police officers. It’s the same story, different name of the man or boy of color, black and brown being shot to death, unarmed.

This piece of art motivated me to pick up the pen and write. Online I commented on the photo of the mural (Nice). What happened after that was unexpected. An anonymous person reached out to me and told me that the mural that I and others had admired was not the original piece of art. It started out as a very different image and this was what it was turned into.

I began asking questions trying to find out the background information on this piece, but it wasn’t easy. I had to go through several different people online, on the phone, until finally I was able to meet the artist and community members involved with changing this mural. Both the community member and the artist wanted to remain anonymous.

I met with the longtime community member first who stated he was born and raised in Oakland and he was from the San Antonio District area. He stated one day he was driving by International and 19th Avenue when he noticed some guys who didn’t look like they were from the area prepping the wall of an unoccupied, privately- owned building.

”I pulled over and asked them where they were from?” he told me. They said that they from Fremont. He then asked what they were putting up. They said they were going to put up some art work because Oakland is booming for the art scene and they wanted to get some street credibility, trying to make a name for themselves in Oakland. Street and graffiti artists are recognized and gain popularity based on the location of their work.

“They don’t deal with bloodshed and protecting their children,” the community member told me.  “They don’t go through what we go
through in Oakland, but they want bragging rights.”  He told them, “Well okay then put up a message to stop gentrification,” and drove away.

A few days later the community member said he drove by International and 19th Avenue again to see what the out-of-town artists put up. He said what he saw made him angry. It depicted a very young woman, girl really, with enormous breasts and extreme cleavage. She was biting her fingernail and had her thumb out as if hitchhiking. 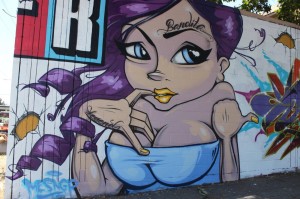 This corridor is well known for sex trafficking of women.  Apparently he wasn’t alone in his reaction. Someone had already placed a poster of Assata Shakur, a proud woman political activist in exile, on the mural.

“We feel we need to have images that empower our neighborhood,” the community member said.  He talked to other residents of the area and they were also offended. Along with another longtime resident, an artist, they decided the image should be changed from something that was disrespectful to their community into something more empowering.

“I live in this community. I have a wife and daughter,” the artist said. “We don’t want our wives and daughters to have to see something like this. We want them to be uplifted.”

The artist changed the mural to feature a woman who is completely covered along with a message that reads:  “A woman’s place is in the struggle” “from Oakland to Gaza” “TOWNBIZ.”

I met the artist at the Chicano Moratorium in San Antonio Park, a celebration of the cultural and political Chicano movement of the ’60s and ’70s.

He filled me in on the importance of street art in the San Antonio community. “Oakland is the home of the Chicano art movement,” he said. “This wasn’t to teach them (the out of town artists) a lesson, it’s to show solidarity from Oakland to Gaza.”

I asked him why he wanted to remain anonymous and not take credit for his artwork. He signs his work with a tag – peps357.

“I put the needs of the community before myself,” he said. “There are lots of people working to beautify the city of Oakland. As a community we are asserting our authority over our own public spaces.”