The Glenview District is a neighborhood in East Oakland that is home to some of the city’s highest- rated restaurants and local businesses. It serves as a crown jewel on Park Boulevard that is within walking distance of many great Oakland landmarks in between Fruitvale and Piedmont. The positive reputation of this area has made it a desired place to live. But if history is doomed to repeat itself, the area is in line for a retrenchment.

Let’s go back 60 years. It’s 1957. At that time my grandparents were a young Chinese couple in their 20s moving into the Glenview District with their father and my two young uncles. Before they moved in, the block was 100 percent white. No minority family had ever lived there.  As soon as they moved in, they became the victims of racial slurs and taunts from neighbors. The harassment would go on for months until my grandfather had enough of their insults and told them that he was going to rent his house to a bunch of lowlifes to destroy the neighborhood. After that those people became friendlier and all forms of harassment stopped. The relationships stabilized and the neighbors started to look out for one another.

Over the next several years, my grandparents had more children; most attended Glenview Elementary. My two oldest uncles dealt with racism from other students when they attended Glenview, however my other uncles and aunts did not. During the mid 1960’s, minorities started to move in to Glenview, diversifying the neighborhood as well as the school.

In the 1980’s minorities began running and owning the local businesses and by the 1990’s members of the LGBTQ community began moving in. Other than a few neighbors with snobby attitudes here and there, the Glenview District had become an ideal place to live. With the neighborhood reaching its peak by the early 2000’s, it was a shock to see how quickly things would start to deteriorate.

Although there were no forms of racism amongst the neighbors, the same cannot be said about Glenview Elementary. Throughout my entire tenure there, my best friend and I were victimized by other students. Any time the students had the same skin color as the principal, who was African American, the principal would punish the two of us while our harassers went unpunished. This treatment did not stop until the principal left years later.

By 2007, crime had begun to skyrocket throughout Glenview – break-ins, burglaries, vandalism, graffiti, theft, and robberies. However the streets around our block had yet to see their worse. I was entering my teenage years where I started to bring over my friends who were minorities to hang out. Things were not chaotic in the beginning, however as crime worsened, neighbors began to look our way as if we were a part of the problem. A simple walk around the block would never go unnoticed. Over the years it would evolve from being tailed and confronted by members of the “neighborhood watch,” to eventually being stopped and talked to by Oakland police officers. None of these incidents ever led to anything, however previous relationships with most neighbors were either altered or destroyed. Both sides developed a distaste for the other. Gossip would eventually travel for blocks and until the end of high school, my friends and I were seen and treated as the local troublemakers. 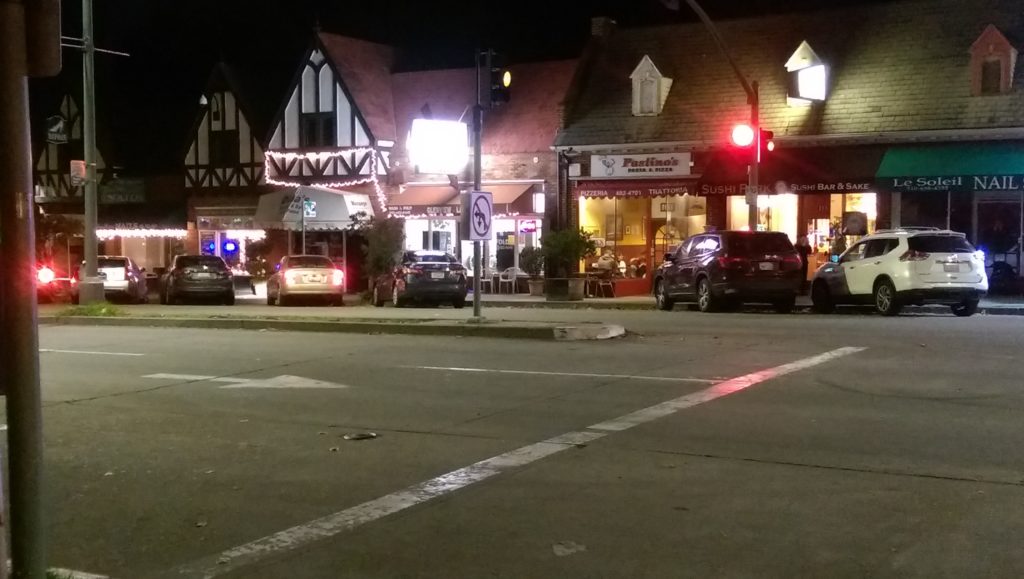 Present day, 2017, nearly all forms of harassment have stopped. A walk around the block by myself or with a friend is no longer disrupted by a biased neighbor or an Oakland police officer. By large numbers, homeowners are selling their homes and moving out of the area and with that unfortunately so are the minorities. Other than the local shops and restaurants in the plaza, the neighborhood is regressing and losing a lot of its identity.

The majority of these homes are being purchased by white collar individuals who are not very friendly and keep to themselves. There is a severe lack of communication amongst the neighbors which has led to minimal trust and selective interactions. In order for the neighborhood to improve, neighbors must be more interactive. Now, you only feel welcomed by the local businesses in the plaza and businesses are not usually the ideal model of  a neighborhood. But now that’s where you find compassion and appreciation for one another.

Glenview has dealt with many obstacles over the years and is currently going through a complicated transition with signs of both loss and improvement. If everyone one could just learn how to properly treat one another again, that original history can be put to rest.