After 10 days of consecutive rain, it seems like the sun and the whole San Antonio neighborhood were coming out to greet and welcome the opening of the Healthy Corner Store in East Oakland. Music with a swinging beat made me put a little motion into my step while the smell of grilling barbecue chicken filled the air at my noon arrival to Three Amigos Market and Deli, 1554 13th Ave., on Saturday February 11. My fellow Oakland Voices Community Correspondent Sandra Tavel and I learned of the Grand Opening a week earlier in a conversation with Shaniece Alexander, Executive Director of the Oakland Food Policy Council. 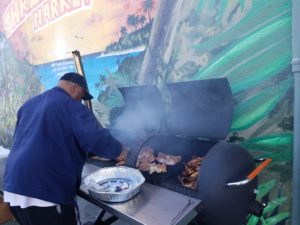 Firing up the grill 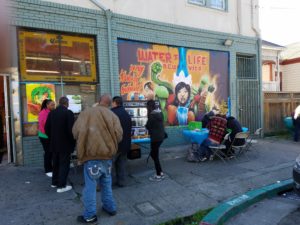 A gathering and a mural

Murals highlighting the power of a natural environment, fresh water, fresh food and clear skies adorned the building. Conspicuous by their absence were advertisements for liquor and cigarettes.

The number of young people working, organizing themselves immediately impressed me. They were going door to door in the neighborhood to invite the community to come out and sample the deli items, have a fresh smoothie, get a raffle ticket and celebrate the work that has occurred.

“Over the last year HOPE Collaborative Project Leaders and Youth Action Board worked alongside the store owner and staff to reorganize the store to highlight existing healthy produce and make room for more than 50 new healthy products,” Ang Hadwin, a member of the Food Policy Council, informed me. She is a project associate in food systems and the lead person on Health for Oakland’s People and Environment (HOPE) Collaborative’s Healthy Corner Store Project. 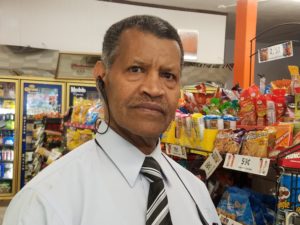 “ I’m grateful that the owner has made such an investment in our community,” said Lianetta Oliver, HOPE project leader and a community member. Oliver learned about food justice from a workshop at her church four years ago. 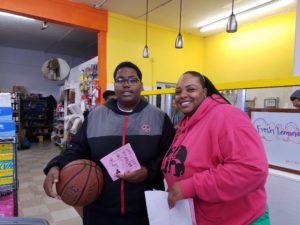 She wondered how she could support healthier food options for her community.  From HOPE Collaborative’s leadership development program, she learned about the extensive marketing of unhealthy options vs the lack of advertising for healthy items. In addition, Oliver learned how to reach out to others and most important to her: “Ronald my 13 -year -old son is learning to be a leader and change agent.” 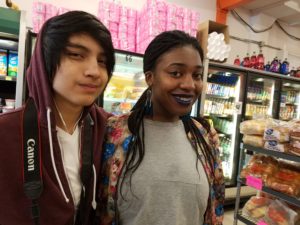 Keys joined while a senior at Oakland High and is now studying media production in the Academy of Arts in San Francisco. Rivera, currently a junior at Oakland Tech, learned about HOPE Collaborative when he was called back to his elementary school to help save the garden which had become so over grown that it was declared a fire hazard and was going to be demolished.
“The garden I helped start was restored and is thriving,” he reported joyfully. He learned of the HOPE recruitment process, submitted the on-line application and after an interview he was accepted and now states, “Media is my thing.”

Rivera and Keys volunteer approximately 12 hours per month in addition to their class work and receive no academic credit for their community leadership. Francisco Zamora, volunteers maybe 20 hours per month. As a senior at Met West High School, Zamora’s work with HOPE is a part of an internship where he earns academic credit.
There are other venues in Oakland that are helping young people learn healthy food practices – East Oakland Youth Development Center (EOYDC), Youth UpRising, and Castlemont High School. These young people will move the food justice conversation forward for years to come.

“This healthy corner store conceptualized in 2012 really is a community- driven effort,” said Sabrina Wu Project Director at HOPE. “The idea for the change, the work for the change—taking down alcohol and tobacco advertisements, taste testing for likes and dislikes, work days to rearrange displays, install new refrigeration, paint and outreach for the grand opening all come from the community.” She said additional markets are in the development stage.

“Access to healthy foods is not as easy for owners,” Hadwin explained. “A person with marketing ideas delivers unhealthy foods and products to the store, arranges display racks, signs, and removes old products. None of those services is available for healthy foods. The owner has to learn which foods are healthy, where to find the healthy foods, pick-up the foods, learn how to store and when necessary remove old products. Funding for permits, equipment, remodeling pose a hurdle for owners.”

HOPE helped the owner crowdfund a $10,000 zero interest loan through Kiva and the City of Oakland. Finally, HOPE assisted the owner in navigating the city and county permitting processes for handling and storage of fresh and cooked foods. 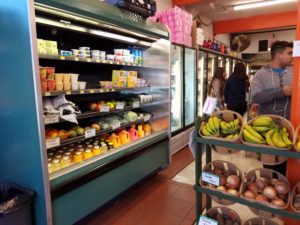 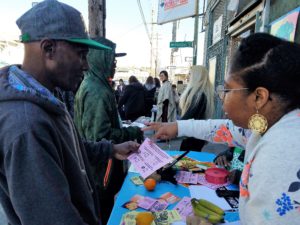 As I moved through the crowd, inside people were sampling and judging several menu items. Outside, neighborhood residents were learning about the scavenger hunt that would qualify them for the raffle. There were art activities. The barbeque aroma, music and sunshine continued to draw people. Cars would stop, people said hello, learned a bit about the store. The vibe was so positive that even when people stopped traffic, I did not hear any honking horns encouraging people to move on.

The common perception is that the corner store is a neighborhood problem. The HOPE Collaborative and Three Amigos Market and Deli change the narrative. Now the corner store can be seen as a resource for healthy living in underserved communities.