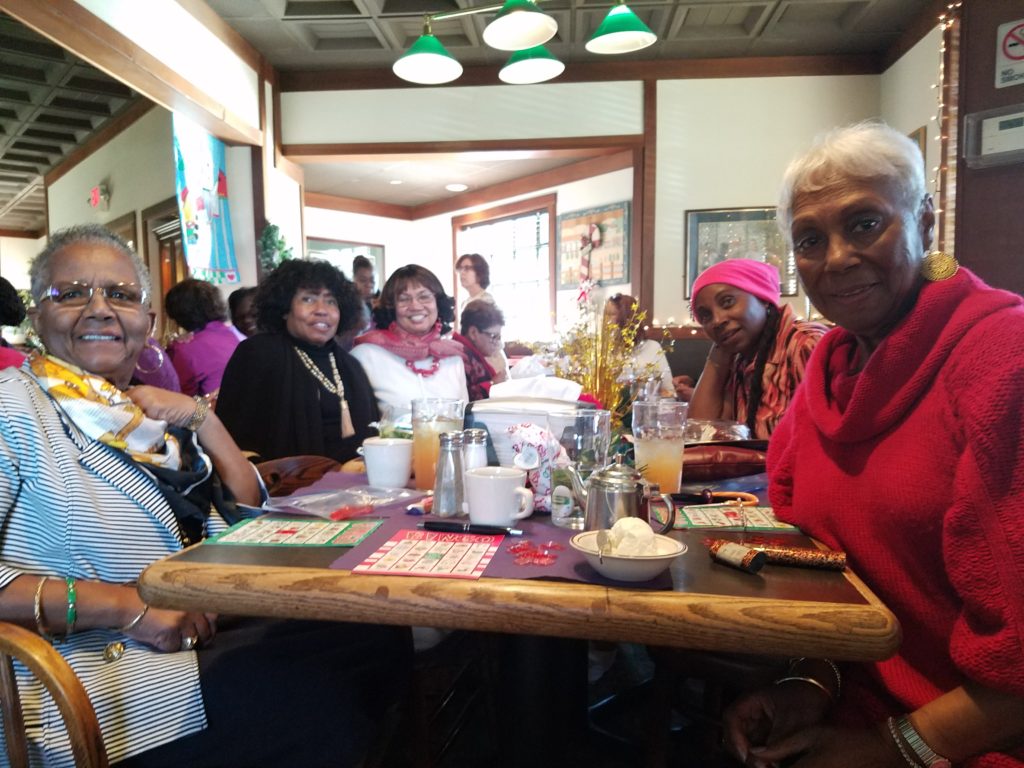 “2016 seems like it just went by in a minute!” my friend wrote in an email where we were bantering about the passage of time.  “Now time just goes by in a flash!  It really is a matter of perspective. I think the perception of time depends on where you are looking from.”

From the marketing perspective, the winter holiday season starts with Halloween. From social organizations’ perspective ,the holiday party season starts with Thanksgiving week. By November 30th, I already had seven December holiday celebrations on my calendar which were occurring before the  middle of the month. This report covers the surprising twist in the party game played in a traditional church  group’s party.

Saturday December 2, party was sponsored by the Ladies’ Auxiliary Court of the Knights of Peter Claver at Harry’s Hofbrau in San Leandro.

“With a common goal of Faith, Unity, and Christian Charity”, the Ladies’ Auxiliary, or Court, is comprised of wives, mothers, sisters, daughters, and friends. The Knights of Peter Claver, Inc. is the largest historically African-American Catholic lay organization in the United States. http://www.kofpc.org/ladies.php.

Throughout the year, members of the Court raise funds to promote civic unity and social justice causes.  This group of accomplished women, all over 40, came together for fellowship and a humble “senior lunch” of carved meats, choices of potatoes, mixed vegetables, and jello or ice cream for dessert.

As the party committee was posing for a picture, two ladies’ sweaters touched for a moment and became entangled.  Fortunately, the delicately woven and the sequenced sweaters were separated without scissors.   It took the patience of Job and four women to separate the beautiful holiday sweaters.

The party was not just lunch and fellowship.  There were games!

The great debate, brain teasers or Christmas BINGO.  Winner was Christmas BINGO. The ladies graciously called “BINGO” when one of them won. However, after two or three rounds, the formal Ladies switched codes and the game evolved into an intimate Afro-Centric call and response mode!

The responses changed from congratulations to, “You’re too young to win.”   Then we heard doubts of the callers’ integrity such as, “Did you put her name back in?” and “You’re not shaking the names enough.”     The reactions proceeded to request for favoritism, “What’s the matter, you don’t want me to win?” “Why do you keep calling that same reindeer- it’s not on my card?”

The bond and mutual respect created through the women’s work together throughout the years was evident. We laughed all afternoon!  It was a welcome comic relief.  It seemed as though we were setting aside the complications of everyday life for a few hours.  The trauma from the previous night’s fire (the deadly Ghost Ship warehouse fire) was not fully known.

The big unanswered questions were why at this time is there no stand-alone sit-down restaurant in East Oakland?  Why did this East Oakland church group have to go to San Leandro for lunch? Why was this revenue not captured by Oakland, which perhaps could have yielded more resource for building inspections?  Why?