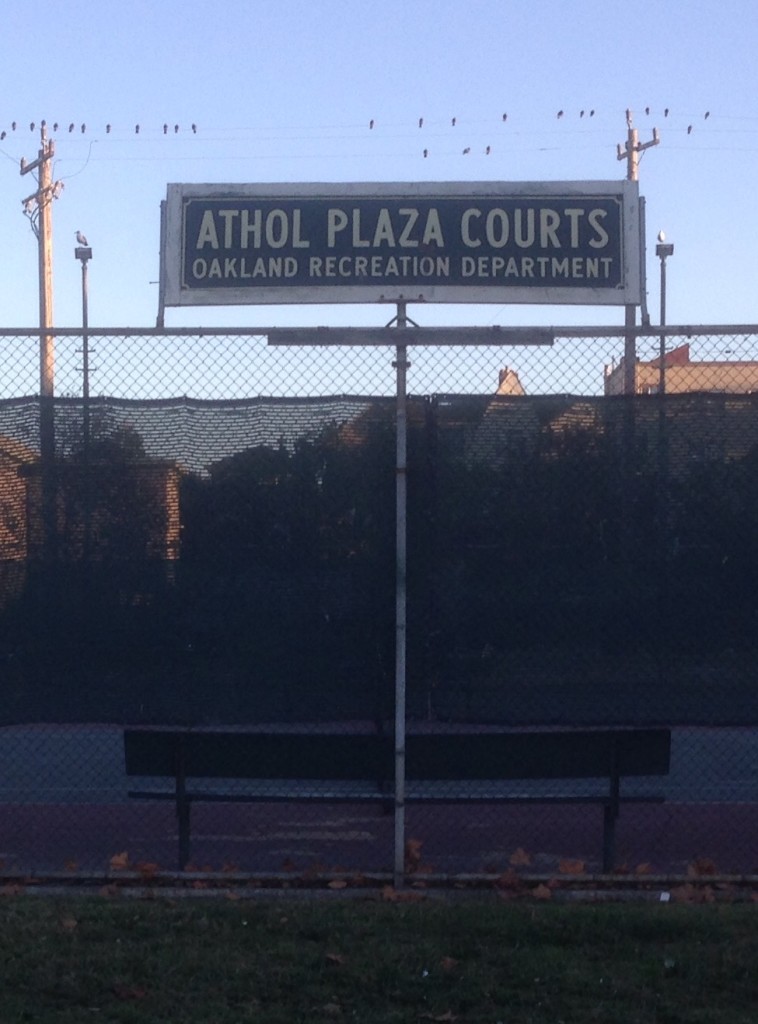 What happens when an artist moves her studio outdoors?

What happens when the outdoor setting is a public space, in this case, seldomly used tennis courts in a tiny park across the street from Lake Merritt?

While professional art galleries continue to pop up throughout Uptown, where are the opportunities for struggling artists?

And most importantly, where do everyday Oaklanders find opportunities to see and perhaps even participate in creating their own artistic expressions?

Visual artist Laila Espinoza is in the process of finding out.

Braving the chill and often dodging raindrops every Sunday afternoon since mid-December, Espinoza has set up shop at the Athol Plaza Courts near Lakeshore Ave. at Foothill. Two tennis courts enclosed by a chain link fence sit at the side of the litter strewn, small rectangular park just off the south east side of the lake.

People without homes often find shelter on the half dozen benches under a small grove of trees where the weeds have taken over. Geese peck at left behind fast food containers or wait for an occasional handout from residents who scatter bread crumbs. Across the street, a senior housing residence rises 11 floors.  At the corner, the longtime eatery, the Lake Merritt Restaurant and Bakery, sits shuttered at the end of the plaza where Lucky’s is the last supermarket on this side of town until the Fruitvale district. 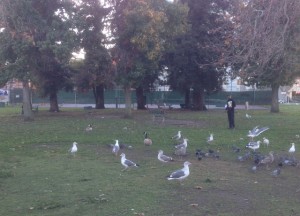 On this chilly Sunday afternoon in January, Espinoza is surprised to see tennis players. “I hardly ever saw them over the summer,” she says.

She lives up the street in a small apartment with her 4- year-old son who often joins her here, one of the few open spaces in the neighborhood. Today she arrives with her friend and fellow artist, Macio from Brazil, who has brought his pandero, an indigenous type of tambourine on which he at once begins pounding a rhythm.

Across the way, a father models a tennis stroke for his daughter as they practice hitting the ball back and forth on one side of the net. Nearby, a young couple makes leisurely volleys.

Espinoza hangs one canvas on the fence closest to Lakeshore — it shows a couple embracing, perhaps dancing; she’s been working on it for some time. “I want to show how it will look when we fill the fences with finished pieces over time,” she says. “It will be like a gallery.”

Below at court side, she spreads out a canvas. It’s the one she started on the first session of the Athol Plaza Studio back on December 14 – the feast of Our Lady of Guadalupe. La Virgin’s form is taking shape: wide eyes, brown skin, her orange chest descends into fish scales before curving to form a tail.

“Our Lady is turning into a mermaid,” says Espinoza. “I think she squirmed over from the lake!”

She seems surprised by this revelation and laughs hard. “I wanted to make her modern,” she says, “with bright colors and close to the water. We pray to La Virgin who is so full of virtue. But we also need to be reminded that we all have sacredness.”

An errant tennis ball rolls across the canvas. The young man asks if it’s OK to retrieve the ball. Espinoza says, “Of course.” She realizes that she has already established a presence at Athol Courts – like of course she’s supposed to be there.

As Espinoza paints, she describes her artistic process to me. She often uses the word “permeability” to describe the body of her largely self-taught work and its influences over the past 15 years. Permeability also reflects her childhood in Segundo Barrio at the porous border at El Paso, Texas and Juarez. “After school every Friday,” she recalls, “my grandma would have all the bags packed and we’d cross the border to Mexico and spend the whole weekend with our family.”

A woman walks by with her dog, apologizing as she passes.

Espinoza describes her internal process of making art as first being absorbed by and becoming aware of her surroundings, a trait born from multiple moves across the Southwest to New Mexico and Arizona before settling in Oakland. “Before I consider what I’m going to do, I consider the city where I live, the town I grew up in, what’s going on in the world, and what’s going on with my family and friends,” she tells me.

An elderly man wearing a ball cap and windbreaker and holding his tennis raquet behind his back stops and studies Espinoza’s work in progress. A tackle box filled with acrylics and pastel crayons sits along side several discarded drop cloths; she seems to be painting a smaller mermaid on one of them.

She asks the man, “Want to do some art?”

“It’s not for me,” he says smiling. He paces along the canvas, and studies it some more before walking away.

At her exhibits — she has had nine shows since arriving in the Bay Area 10 years ago — Espinoza values most the exchanges she has had with viewers of her paintings. “It’s my favorite part of the shows,” she says. “It starts out on a personal level when I talk with people. Then it can become a dialogue. Something about my story connects with their story.”  The relationship becomes reciprocal marked by conversation or telling a story which often leads to a larger interactive vision.

This past summer, as she gathered with friends and other users of the Athol Plaza Courts — guys on bikes, kids with parents, a group playing footsal, older folks taking the short cut from Lucky’s — Espinoza started doing chalk drawings. She enjoyed the reactions to her work, but even more, the space.

“It’s enclosed,” she says. “It’s a little bit private. It feels like a sanctuary. I can sit here and paint or even read.”

She tells me it’s important for artists to be in the real world, to not just lock themselves in their studios. “Artists have receptions, people pay to get in, have a glass of wine, look at art and then what?”

For Espinoza, a piece isn’t finished when the paint dries. She views art, and doing art, as ways to bring people together and a way for artists to bring service to the community. “The arts aren’t just for people with money,” she says. “There are young people who would really love to learn and many people who find peace in doing art.”

Over the next six months, Espinoza sees other artists joining her and her vision of an open, outdoor art studio. “I envision a team of committed artists developing their work, creating these huge canvases. The work will be personal but will also involve what’s going on out there, on the other side of the fence. We’ll offer music and capoeria and invite anyone here to join us because this is a place of re-creation. It will be totally permeable. Eventually, we’ll have so much work that we’ll do a group show.”

The sights and sounds of the street seep through the windbreak on the fence that filters the whir of traffic and the evening skyline across Lake Merritt.

As the sun fades, Espinoza gathers her art supplies and canvases before closing the gate at the Athol Plaza Courts and Open Art Studio, until next Sunday. In the final ritual of her weekly routine, she takes the time to pick up litter strewn around the park —  “It’s a way of giving thanks, of showing Oakland some love,” she says — and heads home.