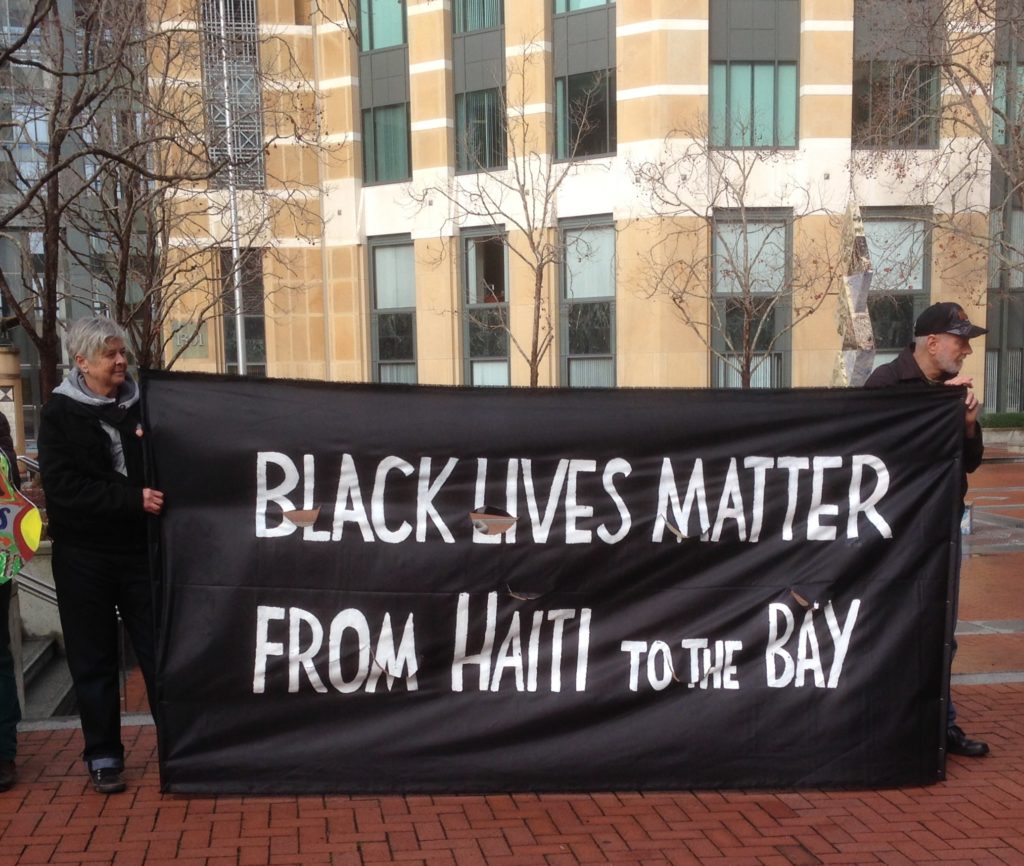 As the clouds lifted and hundreds mustered at Frank Ogawa Plaza on Martin Luther King Day, a spirited group of about 75 supporters of Haiti gathered two blocks away at the Ronald Dellums Federal Building before joining the larger rally and march. Tacuma King’s ensemble from Bay Area Youth Arts pounded a rhythm with Haitian instruments while members of faith, labor, and solidarity organizations held signs calling for free elections in Haiti.

“In Haiti there is a street named for John Brown,” he said. “There is also a Martin Luther King Avenue and they come together. It’s very symbolic of the deep connection that people feel for Dr. King and people who fight for justice.”

Labossiere emphasized the intersection of King’s advocacy for the right to vote and free elections with the current presidential electoral crisis in Haiti which has been widely criticized as being fraudulent. (See NY Times editorial: www.nytimes.com/2015/12/13/sunday/haiti-deserves-a-legitimate-election.html?_r=0).

“The people went out in full force but their vote was suppressed,” he said. “They were prevented from voting by the ultra right wing government which is trying to shove a government of the elite down their throat. That government is trying to turn Haiti over to multinational corporations along with our mineral rights and allow them to continue to exploit our sisters and brothers, paying them less than $2 a day.”

Civil rights attorney and Haiti Emergency Relief Fund Co-chair Walter Riley went further, recalling King’s words that the US is “the greatest purveyor of violence in the world.” Riley criticized the media for  “putting him (King) on a pedestal” of post-racial harmony and “academics and liberals who preach a philosophy of accommodation that says that everything is moving forward, that everything is equal. It is not,” he said.

While denouncing the outright voter fraud in Haiti, Riley argued that the current field of presidential candidates in the US suggests a lack of true electoral democracy. “There are people who have power who hold sway over institutions,” he said. “They dominate policy making, pay for elections to the degree that their vote outweighs the vote of the masses.”

Later, as we awaited the start of the Martin Luther King Day rally, I had the opportunity to speak further with Labossiere and Riley. I asked them to draw additional connections with King, Haiti, and current day-to-day realities of East Oakland.

Riley, who was the SF Bay Area Chapter of the National Lawyer’s Guild 2013 Champion of Justice, told me of his coming of age during the height of the civil rights movement in Durham, NC. He participated in sit-ins, voter registration drives, and housing campaigns. By the early 1960’s, he was a statewide field representative for the NAACP in Georgia and later field secretary and full time organizer with CORE.

Riley pointed to King’s as yet unfinished agenda for Poor People’s Campaign. “King talked about the need for a guaranteed annual income, universal health care, worker rights and the right to jobs.” He said that the differences between Haiti and E. Oakland were a matter of degree. “The exploitation in Haiti is similar to the exploitation here except in Haiti, it’s capitalism gone wild. There are fewer restraints on US corporations and US government policy.”
Labossiere has been deeply involved with community activities since arriving in the Bay Area in 1981. With the deposal of Haiti’s first democratically elected president, Jean Bertrand Aristide, in 1991, local clergy encouraged Labossiere to speak out on behalf of Haiti. In the early 1990’s, he was a member of the committee which hosted Aristide and introduced him to local audiences. He has maintained a close relationship with the democracy movement and Aristide’s Fanmi Lavalas Party through his subsequent return to power in the early 2000’s which ended, according to Labossiere, with a coup in 2004 initiated by the US, France, and Canada.

Labossiere argues strenuously against any accusations of corruption regarding the Aristide government, dismissing them as part of an anti-Aristide propaganda campaign.

“During the time of Aristide,” he told me, “ voting was a way for the grassroots movement to get in office so that they had a chance to to change the conditions of their lives. There were significant changes. They were not out of the woods, but they were taking steps to improve our of miserable conditions. As Aristide himself put it, ‘we were moving from misery to dignified poverty.’”

Labossierre also drew parallels between housing displacement and gentrification in Haiti and E. Oakland. “When I see people losing their homes, I think of people I’ve visited in Port au Prince whose homes were razed to the ground to make way for luxury homes and hotels,” he said. “People are living in cars and abandoned trailers. When I see the same thing happening in E. Oakland, the connections are so strong.”

Labossiere noted the similarity of the police killings of young black men in the US and Haiti. “We have video tape footage of a young man being stomped to death by UN -trained Haitian police,” he said. “That’s why we say black lives matter from Haiti to Oakland. That’s why we need a government of the people, by the people, for the people….governments that put people first and profits second.” 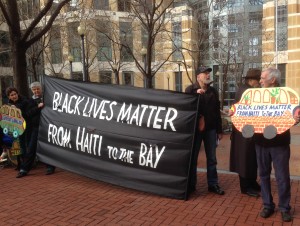